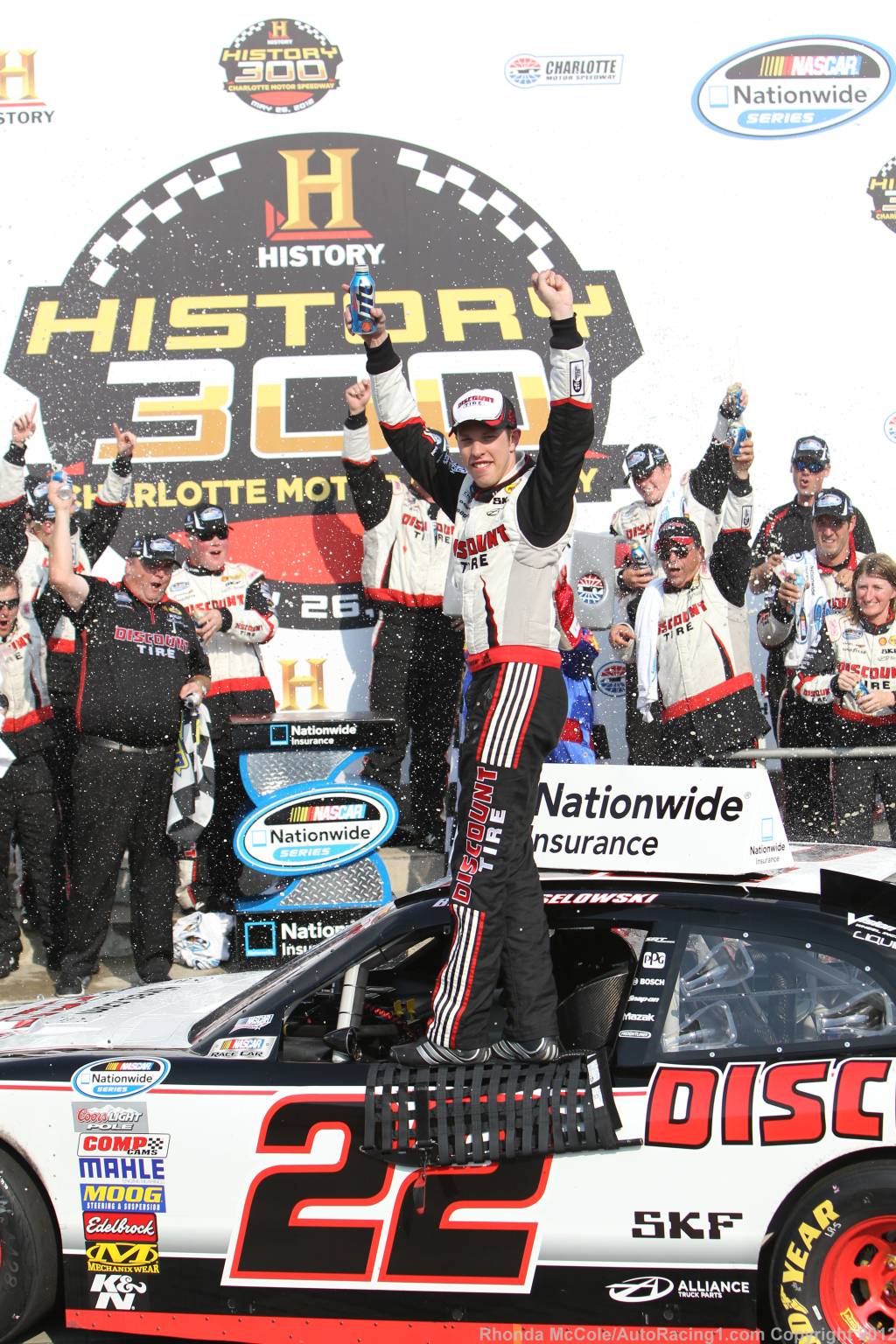 Keselowski held the lead after getting past Kasey Kahne for the lead on lap 134, stretching his fuel to beat Denny Hamlin and notch his first Nationwide Series victory of the season and the 18th of his career.

Keselowski managed to stretch his fuel for 71 laps after last pitting on lap 129, bypassing pit road over the final two caution flags and saving his fuel over 15 caution laps to conserve enough to make it to the end.

“There’s a strategy and you know, Penske Racing engines, they do a great job with fuel mileage on the Dodges and they deserve a lot of credit for it," said Keselowski. “There’s only so much you can do as a driver and a lot of it comes down to the car and what it needs.

“Denny (Hamlin) didn’t let me save any (fuel). I can tell you, at the end he was running pretty hard. I knew he was going to be tough, both him and Kyle (Busch). Thankfully, we were able to save enough fuel. And I get what I think is one of the biggest wins of my career, to win on Memorial Day weekend and what it means to me and this country. It feels great."

With Penske teammate Ryan Briscoe on the pole at Indianapolis and Keselowski scoring a runner-up finish in last weeks Sprint All Star race, Keselowski’s win gives team owner Roger Penske a chance at a weekend sweep.

“You know, you’ve got three shots at winning races this weekend for Roger and Penske Racing," said Keselowski. “We’re one for one, so that’s good."

Keselowski proved to have a stout car in the no. 22 Dodge, twice coming up through the top ten to make his way to the front, taking second by lap 69 behind Harvick

Still running second behind Harvick, Keselowski came to pit road for the last time on lap 129 – one of only two cars to take on four tires – then restarted eighth and once again began working his way back through the field.

Up front, Kasey Kahne got past Joey Logano – who had elected to stay out – with a push from Harvick and began pulling away. Two laps later, Keselowski overhauled Harvick for second, then reeled in Kahne the following lap and ducked low in turn one to take the lead.

Once out front, Keselowski pulled away and managed to hold on over the final laps, including two late restarts where he slowly circled the track under caution to save more precious drops of fuel.

Despite the two late chances to duck to pit road for a splash of fuel, Keselowski said there was never any consideration by him or crew chief Jeremy Bullins to give up the lead to come to the pits.

Keselowski’s fuel strategy had other drivers shaking their heads wondering how he could have pulled it off when so many others couldn’t have gone the distance.

“There’s no way our stuff would have done that," said Busch of Keselowski’s fuel strategy. “That’s definitely different, but I guess anything is possible sometimes. Maybe they saved really hard under cautions and everything. I don’t think we could have pushed it like that."

Hamlin finished second despite an extended stop on pit road early in the race to change a carburetor on his Toyota that put him a lap down. Hamlin rallied, got back on the lead lap and got back to the front of the field with a fuel-only stop with 57 laps to go.

With ten to go, Hamlin got past Busch to take second, but had no chance to chase down Keselowski who was already 1.6 seconds ahead.

“I complained about the motor early – just didn’t feel like it ran at the end of the straightaway for some odd reason. We tried to change the carburetors and that didn’t fix it," said Hamlin. “Just got stuck14th or so for a while until we got the handling until it was at least drivable and then we were able to make our move to the front. We were good on long runs – just didn’t have a lot of front line speed."

Series points leader Ricky Stenhouse, Jr. took a big hit in the points after a broken drive shaft put him behind the wall for 21 laps. He ended up finishing in 26th and lost 15 points to Sadler, who now trails Stenhouse by 13 points.

Travis Pastrana, making his fourth Nationwide Series start, spun his Toyota in qualifying then looped the car again twice during the race to bring out the caution flag and ended up 24th.