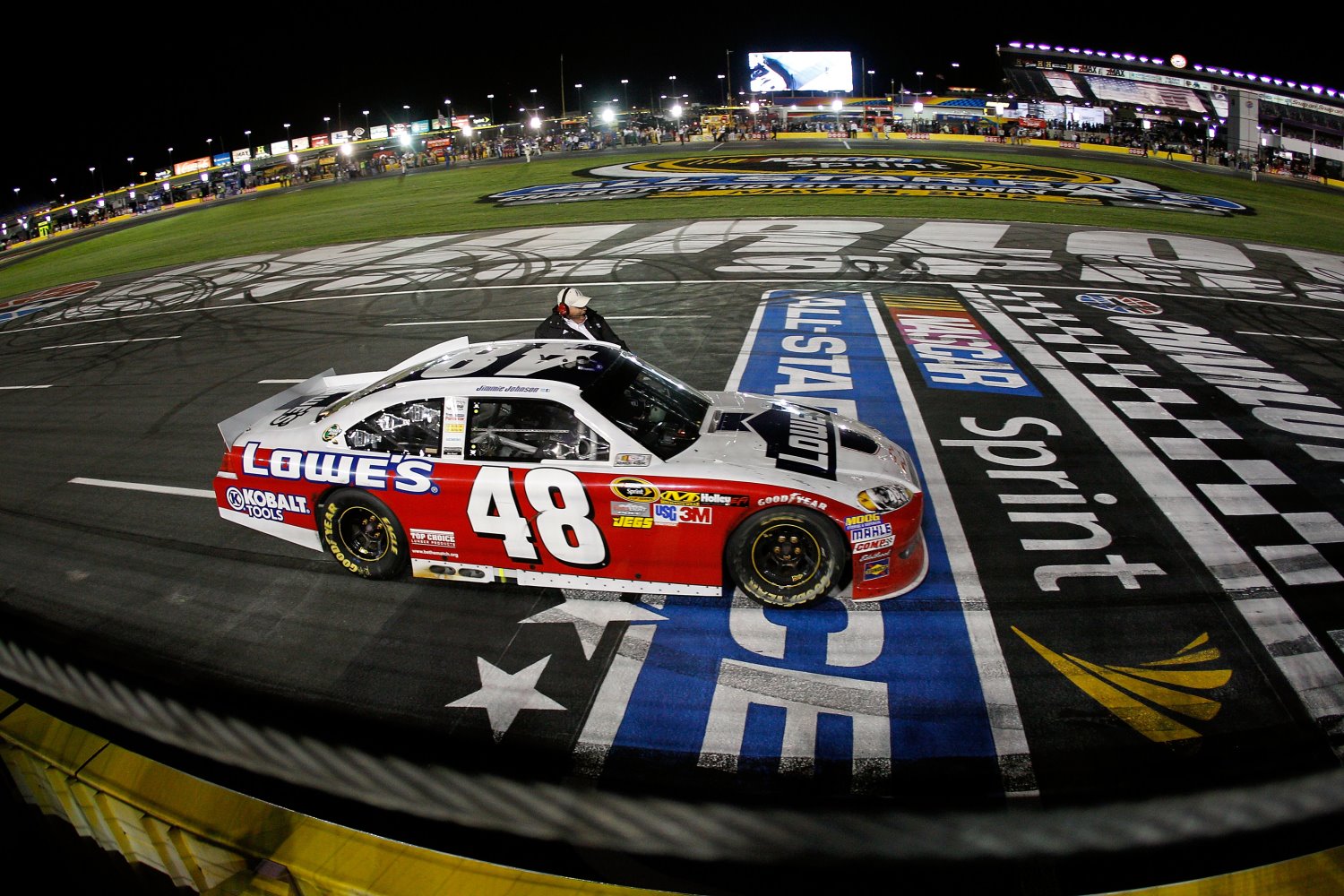 Over the previous weekend we watched the #48 Lowes team again rise to the occasion during the NASCAR Sprint Cup's All Star weekend at the Charlotte Motor Speedway. We watched team owner Rick Hendrick enjoy the best week ever and get the ride of his life. Meanwhile in Iowa, we watched the continued rise of a future NASCAR super star and, in the tail gate division, we enjoyed a first time win for a driver and his team owner. With those thoughts in mind, let's begin with:

THUMBS-UP to Jimmie Johnson for winning the 2012 Sprint All Star race for the third time. He's now tied with Dale Earnhardt Sr and team mate Jeff Gordon for most wins in this prestigious event.

THUMBS-UP to winning crew chief Chad Knaus for a very well played game plan in this race. Johnson won the first 20 lap segment and that earned him the right to lead the pack down pit road during the final mandatory pit stop prior to the ten lap shootout. During the second through fourth 20 lap segments, Johnson stayed back to avoid any trouble usually associated with this race. During the final appearance on pit road, Knaus called for a no service stop. In other words: no tires or gas. Johnson entered his pit stall, brought his tires to a complete stop for a fraction of a second and then left the pits in first place. It was a very shrewd move that led to the win.

THUMBS-UP to Johnson's pit crew for playing such a pivotal role in the All Star win and THUMBS-UP to the Hendrick Motorsports Lowes #48 team for winning the eighth annual NASCAR Sprint Pit Crew Challenge on the Thursday night prior to All Star weekend. The #48 team beat the #11 Joe Gibbs Racing Fed Ex Toyota team who were two time, consecutive, champions by three-tenths of a second. To do that the Lowes team had to put on a penalty free performance by changing four tires, placing two cans of gas in the tank and then pushing the car 40 feet to the finish line. They did all of that in an astounding 22.3 seconds to collect a grand prize worth in excess of $80,000 plus a $9,000 plus donation to their designated charity: the Jimmie Johnson Foundation.

THUMBS-UP to part of that grand prize being the right to first pick of pit stall selections for the All Star race. That turned out to be a huge factor in the team's win. According to SPEED Channel broadcaster Larry McReynolds' ever present calculator, Johnson's winnings, $1,071,340, came to approximately $11,500 per lap.

THUMBS-UP to the special design on the winner's race helmet. Johnson had a portrait of George Washington, from the one dollar bill, placed on the back of his helmet. It turned out to be a powerful good luck charm because Johnson collected over a million of those one dollar bills following the win.

THUMBS-UP to Dale Earnhardt Jr for winning the Sprint Showdown, the ultimate Saturday night B Main, that placed him in the line up for the Sprint All Star Race. He went on the win the third, 20 lap, segment in that race and finished 5th in the final standings following a very strong run.

WHAT'S-UP with yours truly and my failure to keep my big mouth shut in front of the in house girlfriend: the forever T shirt wearing, card carrying, member of the Junior Nation? After Earnhardt won the Sprint Showdown, she was jumping up and down squealing "Junior won, Junior won." I made the monumental blunder of reminding her that the win was a non points paying exhibition race that did not conclude the official long term Sprint Cup win less streak. I made matters worse by further pointing out that the post race interview was not conducted in victory lane and was, in fact, held in the garage area in front of a building where the men's room is located. Later that evening I found myself in our kitchen making myself a peanut butter and jelly sandwich for dinner. No need to feel sorry for me: I really like PB&J.

THUMBS-UP to team owner Rick Hendrick for having just the best week ever that began with Jimmie Johnson presenting him with his 200th win, May 12th, at Darlington. This was followed by the win in the pit crew challenge and the sweep of the two races during Sprint All Star weekend at Charlotte. By the way, the total value of that week's worth of winning came to $1,523,961.

THUMBS-UP to Rick Hendrick for an emotionally charged, but very fun, victory lap ride at Charlotte. With his left leg inside of Johnson's driver window, his left leg dangling outside of the car and both hands tightly hanging onto the roll bars, the driver took his boss on a front stretch victory lap so Mr. H could wave to the 132,000 fans who gave him a standing ovation.

THUMBS-UP to Hendrick for the very funny comment after the victory ride when he said "this is the dumbest thing I've ever done in racing, I thought I was going to become a smashed watermelon."

The THUMBS-UP for making chicken salad out of chicken do do absolutely goes to A J Allmendinger. After winning the pole for the 40 lap Sprint Showdown race, the "Dinger" wound up with a left front flat tire during the parade lap. This was just the latest in a long series of frustration this team has felt all year. After coming to pit road for a new tire, Allmendinger started the race at the rear of the field. He drove his guts out to get to second by the end of the race which awarded him a transfer spot to the All Star big money show where he finished 11th. Here's hoping he enjoyed that special edition of chicken salad.

WHAT’S-UP with the Roush Fenway Racing power plants during the All Star race? It's very well known that, during past All Star events over the years, team engine builders have been somewhat experimental and used this particular race to try new ideas. Unfortunately for two of the RFR teams the concept didn't pan out very well. Pre race favorite Carl Edwards lost his engine early, on lap 27, and was the first car out of the race. But the big bang theory came on lap 69 when Greg Biffle's engine blew up while spewing flames all over the car. Matt Kenseth, the third RFR driver, came over the radio and said "I guess it's my turn next." Fortunately, that didn't happen and Kenseth went on to a third place finish.

With all of this being said and done, WHAT’S-UP with the Sprint All Star race being, shall we say, a little sedated? When you compare the 2012 edition to previous ones there was little evidence of the intense motorized frenzy we've seen in the past.

THUMBS-UP to Ricky Stenhouse Jr for winning the Pioneer Hi-Bred 250 NASCAR Nationwide Series event at the Iowa Speedway. The Roush Fenway Racing driver completely dominated the event by leading 209 of the 250 laps. The defending series champion scored his third win of the season, his fifth career win and his third, consecutive, win at Iowa. He finished 1.465 seconds ahead of season points rival Elliott Sadler and padded his lead in the standings to 28 points.

But the points lead may be changing. WHAT’S-UP with Elliott Sadler's Chevrolet failing the post race technical inspection? It seems that the car was reported to be too low in height. An announcement regarding what becomes of this problem is expected either Tuesday afternoon or Wednesday morning.

There's not a better sight in NASCAR than a first time winner. THUMBS-UP to Justin Lofton for winning the North Carolina Education Lottery 200 NASCAR Camping World Truck Series race at the Charlotte Motor Speedway. After leading a race high 44 laps, Lofton had to fend off a late race charge from Brad Keselowski and beat him to the checkers by a mere 0.261 seconds. Lofton is now the new series points leader but only holds a one point lead over Timothy Peters.

THUMBS-UP to team owner Eddie Sharp who also scored his first ever truck series win at the Charlotte race. Last year Sharp purchased some Chevrolet Trucks from Kevin Harvick Inc and, in a post race victory lane interview, said " they all said I was crazy for buying those trucks and there were times when I was beginning to think I was crazy." It doesn't seem so bad now.

The final WHAT’S-UP goes to the SPEED Channel's live coverage of the NASCAR Camping World Truck Series' Charlotte race and the "F bomb" that went out over the air two times on the same night. After the race there was a seemingly heated debate between drivers Ron Hornaday Jr and Brad Keselowski regarding their contact during the final restart of the race. It was Keselowski who uttered the "F bomb." But, in all fairness, the SPEED Channel crew was waiting for the opportunity to interview both drivers, Keselowski wasn't aware that a television crew was standing behind him and the SPEED Channel control booth, not realizing the word was coming, couldn't get to the censure switch fast enough. SPEED racing analyst Rick Allen apologized for the unfortunate gaff live on the air and, later, NASCAR officials agreed that the incident was unintentional and no action would be taken.

So exactly what is this WHAT’S-UP for ? Later that same night the SPEED Channel aired a re broadcast of this race. Amazingly, they also treated us to a replay of the "F bomb" complete with Allen's apology. Apparently someone from SPEED forgot to edit the comment for the second airing. For the "F bomb" to get on the air live, under those particular circumstances, is indeed an accident. For the same "F bomb" to get on the air a second time is absolutely a WHAT’S-UP.

The final THUMBS-UP goes to Fox racing analyst Darrell Waltrip. From "boogity-boogity-boogity" to "it is what it is", DW has been treating us to some humorous on air observations for many years now. There has even been a few comments where we the fans weren't exactly sure what he meant. Such was the case, during the Sprint All Star race, when Waltrip observed Jimmie Johnson passing Denny Hamlin for position and said: "he drove that thing in there until he could see Elvis."

Seriously, what does that mean? Which Elvis was he referring to? Was it the skinny Elvis from the 1950's and 1960's? Was it the overweight Elvis from the 1970's Las Vegas years? Or was it the Elvis conjured up by conspiracy theorists who claim that the king of rock n roll is still alive and operating a Burger King franchise he owns outside of Detroit? I'm just asking.