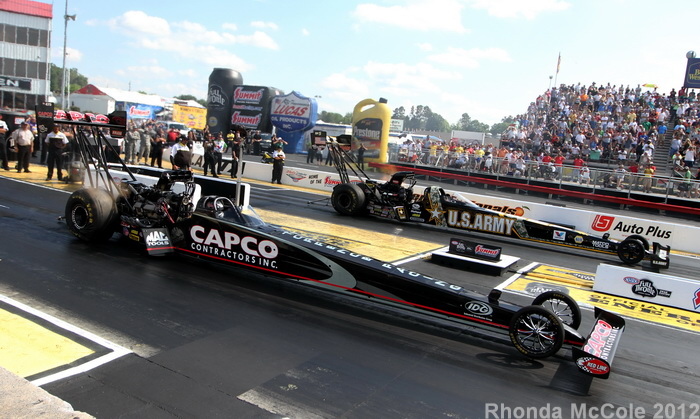 Steve Torrence made the most of out his first career Top Fuel final round appearance, taking on no.1 qualifier “The Sarge" Tony Schumacher.

Driving for his own family-owned team, the 2005 NHRA Top Alcohol National Champion tried to capitalize on the momentum gained in the last two events where he qualified first and second, but got knocked out in the early rounds.

After qualifying in the second position on Saturday, Torrance beat out J.R. Todd, Bob Vandergriff and Brandon Bernstein in three stout rounds to reach the finals – the first time he’d made it past the semi-finals in 55 career Top Fuel starts – and faced Schumacher, who bested Pat Dakin, Terry McMillen and Doug Kalitta to reach his 114th final round and his fourth at Atlanta, still looking for his first win at the track.

In the final, Schumacher was first off the line with a .031 light, but then went up in smoke before he reached the 60-foot mark, while Torrance went 3.893 at 320.66 mph to win his fifth national event victory, including four Top Alcohol victories.

“It hasn’t really even set in," said Torrence. “We’ve been working our tails off since last year at this race. This was the last race that I raced with Dexter [Tuttle] and we set out to start our own team. To kind of start the new team and get the first win here, that’s a big deal for us."

“We’re 10 races into this new team. Getting this first win, it’s unbelievable. To do it here at Atlanta is awesome. This is a great racetrack. It just hasn’t caught up to me yet. Hopefully, this is the start of a lot of really good things."

On Sunday, Capps finally broke into the win column and broke up John Force’s stranglehold on the Funny Car division with a victory over JFR driver Robert Hight in the finals.

John Force himself started the six-race streak at the season-opening event at Pomona, then Hight captured the next four events and Mike Neff extended the streak with a victory last week at Houston.

Hight seemed to have momentum on his side, taking the top qualifier spot and knocking off Bob Bode, teammate Courtney Force and Jim Head to reach the money round for the fifth time this season.

Capps, who beat out Daniel Wilkerson, Matt Hagan and Jeff Arend to reach the finals, had already lost out Hight at Charlotte and to Neff in Houston and was now facing Hight in the final for the third time in his career.

In the final, both drivers hit nearly identical lights and were side by side at the 60-foot mark before Hight started to lose traction and Capps pulled away, going 4.166 at 303.91 mph to grab his 34th Funny Car Wally.

“This is such a great team, and right from the get-go in Charlotte, the first run reminded me how fun it can be to race again," said Capps. “I was starting to just get a little frustrated and wondered if maybe I wasn’t as good as I used to be when I was younger. It just got very difficult. When Don [Schumacher, team owner] made the move and put me with Rahn [Tobler] and John Collins, I’m telling you it was just unbelievable. I’m having so much fun right now. I’m the luckiest guy in the world to be driving this car."

The Pro Stock final matched up featured the top two drivers in the points standings, with three-time Atlanta winner and points leader Greg Anderson beating out defending event winner and no. 1 qualifier Jason Line on a holeshot for his third win of the season.

Anderson, who came into the weekend with a 60 point margin on teammate Jason Line and riding a hot streak of four final-round appearances in the first six races, won out over Greg Stansfield, Steve Kent and Allen Johnson for his 20th career final-round meeting against Line, who faced down Warren Johnson, Vincent Nobile and Ronnie Humphrey to run for the money for just the second time this season.

“We’re very happy as a team," said Anderson. “It’s great to have three Summit cars in the semis. That doesn’t happen too often with multi-car teams. It just tells you that everybody is rowing the boat in the same direction and pulling their load. That’s what I’m the most proud of – assembling this team and instilling in them that it doesn’t matter which driver wins.

Krawiec cruised the final round after red-light wins over Michael Phillips and Karen Stoffer before topping Shawn Gann to face Ray, who had the tougher road taking on Matt Smith, points leader Andrew Hines and no. 1 qualifier Hector Arana, Sr. to move on from the semi-finals for the first time in 19 career starts.