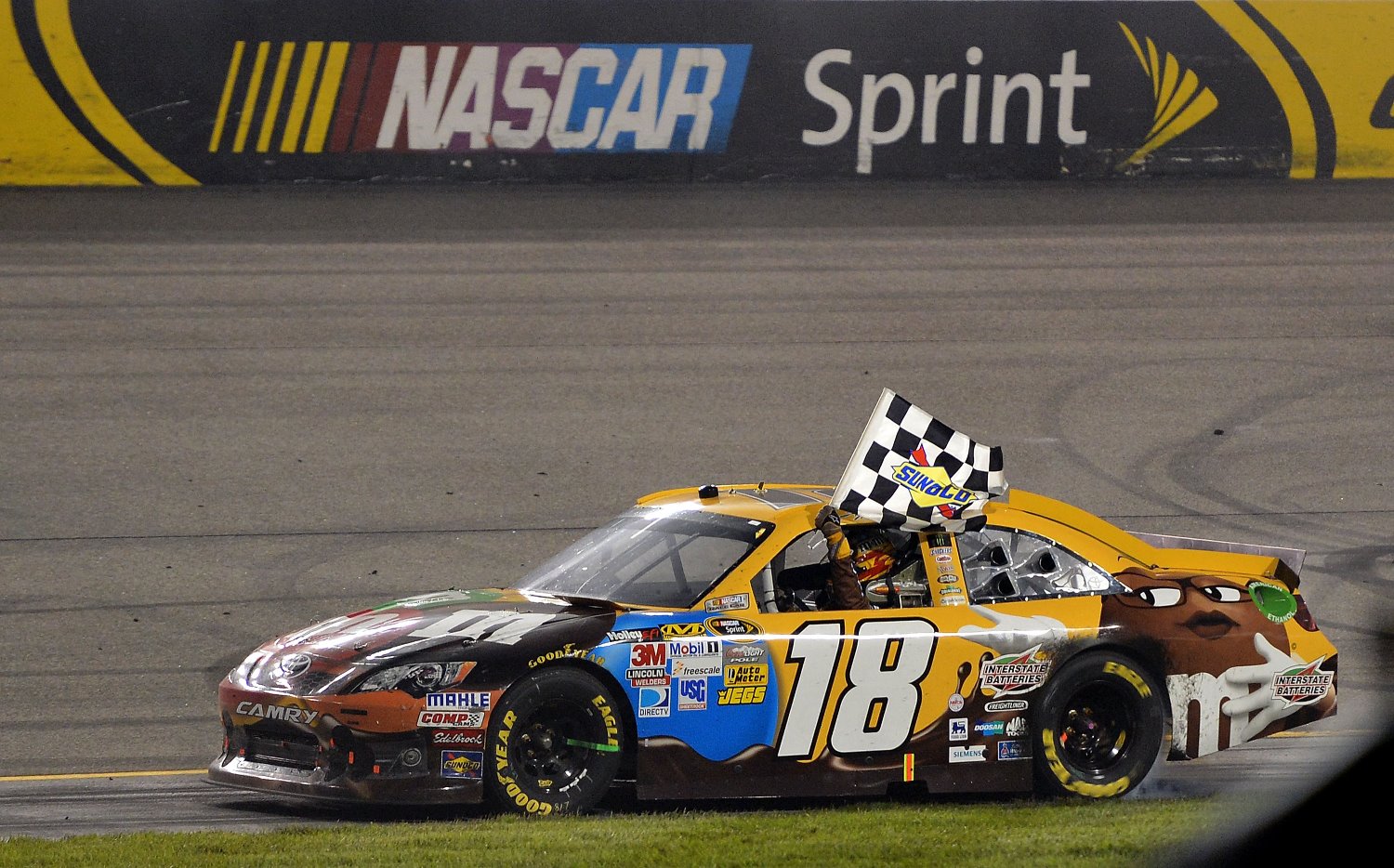 Pulling away from Dale Earnhardt Jr. after a restart with eight laps left in Saturday night's Capital City 400 at Richmond International Raceway, Kyle Busch streaked to his fourth straight victory in the spring race at the 0.75-mile track.

The win was Busch's first of the season and the 24th of his career, tying him with his brother, 2004 NASCAR Sprint Cup champion Kurt Busch, for 26th all-time.

Tony Stewart, the race leader before the fifth and final caution for debris in Turn 2, lost ground on the restart and finished third. Denny Hamlin ran fourth, followed by Kasey Kahne.

The race turned on the last caution, which Stewart said was called because of a plastic water bottle in Turn 2. Stewart was strong on long runs but uncharacteristically slow off the mark on restarts, and Busch took full advantage.

The first step was beating Stewart off pit road during the final four-tire stop on Lap 388 of 400 and gaining control of the restart.

"I don't know where that last caution came from, but it was our saving grace," Busch said in Victory Lane. "It was a gift. We came down pit road and (crew chief) Dave Rogers and the guys went to work and gave us a great pit stop, got me out front.

"(That) gave me the lead so I could restart the race how I wanted to. That was the win right there."

As he approached the finish line, Busch radioed to his crew: "What up, boys — we're back!"

It was a stellar weekend for the race winner, who won Friday night's Nationwide Series event as a car owner, with brother Kurt behind the wheel of the Kyle Busch Motorsports Toyota.

Earnhardt, who took over second in the standings — five points behind series leader and 18th-place finish Greg Biffle — experienced brake problems for much of the race, but used the late restart to improve his position after Stewart fell back.

"We had some brake problems all race long," Earnhardt explained. "I had a great restart, and I ran really great for one lap, and the pedal went back to the floor. I just had to pump it up all the way down the straightaway and I didn't have any front brakes getting into the corner, so I couldn't get in real hard.

"It would just get loose locking the rears up. So even with the brakes working, I think the No. 18 (Busch) was just a little bit better than us all night."

Slow pit stops cost Stewart track position on more than one occasion, but it was the final caution that proved the undoing of the defending Cup champion, who has three Richmond victories but none since 2002.

"When the caution is for a plastic bottle on the backstretch, it's hard to feel good about losing that one," said Stewart, who led Busch by more than a second when the yellow flag waved. "And we gave it away on pit road. So we did everything we could to throw it away; it got taken away from us.

"That's the best car I've had at Richmond in a long time. So I'm really proud of that and (crew chief) Steve Addington, and I'm proud of our guys. But we've got some work to do on pit stops right now. I don't know what their malfunction was but I'm pretty ticked off about it tonight."

A caution for Jeff Burton's crash into the Turn 3 wall on Lap 311 interrupted a cycle of green-flag pit stops and scrambled the running order.

Jimmie Johnson, who came to pit road when the caution flew, was penalized for a tire violation on his pit stop — after one of his crewmen rolled a tire unattended toward the pit wall — and had to restart on Lap 319 from the tail end of the field.

That same restart proved disastrous for Edwards, who was black-flagged for jumping the start after he put the power down, in NASCAR's judgment, before reaching the double red restart lines on the outside wall.

Forced to serve a pass-through penalty, Edwards dropped to 15th, 17 seconds behind Stewart. On lap 372, Stewart put Edwards a lap down and pulled away from Busch in second place to a lead of nearly two seconds.

Johnson rallied to finish sixth, but Edwards, who led a race-high 210 laps, had to settle for 10th, after getting back on the lead lap as the free-pass car under the last caution.

Why are you so successful at ?
"Great team. Great cars. Being aggressive when it matters, but yet trying to save your tires when you can. I don't know where that last caution came from, but that was our saving grace today. I can't say enough about this M&M's Camry. It was a really good race car. Just didn't quite have enough on the long runs like (Tony) Stewart had. He was really, really good and beat us there."

What did you think about the final caution?
"It was a gift. Man, I just don't know where it came from or what it was or anything, but it doesn't matter. We came down pit road and Dave Rogers (crew chief) and these guys went to work and gave me a great pit stop — got me out front. Gave me the lead so I could restart the race how I wanted to. That was the win right there. This thing was so fast if I could abuse the tires, but I knew in long runs you couldn't do that. And we always kind of struggled in the long run, but had a lot in reserve on the short run. So, that was really cool. This M&M's Camry was awesome."

How much did the track change during the race?
"It c hanged a little bit, especially the first 20, 25 laps. That's kind of the biggest thing that you go through once you're really putting down rubber and racing on top of rubber is probably the most challenging aspect of these things. And you try to figure out what your car's going to do on restarts and on the long runs. That's the biggest challenge we fight. (Tony) Stewart was phenomenal. I hate it that — I hate it for him that we had that caution like that. He deserved to win the race, but I can't say enough about us just getting our lucky break there and getting a chance to win and get here in victory lane. It feels good."

How does it feel to win a record-setting four straight spring races at Richmond?
"Is that some sort of record? I'm hoping it is. I don't know. It means so much that we're able to come to this place every time and know that we can have a decent car and again, like I said, it wasn't the best car, but it was really good. We just kept fighting, kept ourselves up there in track position, kept the fenders clean, the right side clean — didn't hit the wall or anything — so I think it's in relative one piece. We probably get ready here to go to Loudon ()."

Would you have caught Tony Stewart without the last caution?
"No. I was losing half a tenth to a tenth on every lap to what Tony (Stewart) was doing up there. He was just so fast. At that point, I kept trying and staying with him there early in that run to get him the pressure and use up his tires a little bit and I could see him doing some of that, but then my car just started getting a little bit too tight in the center and a little bit too loose off where I started losing ground. And once I about couldn't see him anymore, I figured, 'Okay. I'm going to save what I've got here and just try to make it to the end here and see if any of the guys catch me from behind, give me something that I have left that I can reach them with if they get to my back bunker.' No catching Stewart without that caution."

WAS THERE ANYTHING YOU COULD HAVE DONE WITH THE NO. 18 OF KYLE BUSCH AT THE END?
“No, we had some brake problems all race long. I had a great re-start and I ran really great for one lap and the pedal went back to the floor. I just had to pump it up all the way down the straightaway and I didn’t have any front brakes getting into the corner so I couldn’t get in real hard. It would just get loose locking the rears up. So even with the brakes working, I think the No. 18 was just a little bit better than us all night. But I want to thank National Guard and Diet Mountain Dew and my team; they had great stops and we gained a lot of spots on pit road. And we had a great race car. All the people at Hendricks; they do a great job, man. It’s just been fun this year."

ON HIS RACE:
"We out-ran a couple of guys there that were faster than us all night. Just got lucky on that restart being on the inside. We had some brake problems all night long. Kind of tried to overcome them best we could. We were a top, maybe a fifth place car. I'm really happy to gain a couple of spots there at the end with that caution and get some more points."

ON HOW WILD THE RESTARTS ARE:

"You want to try and win the race, but you got to take care of everybody around you. You just try to do the best you can to win the race and be smart doing it. Make it look good. I have to thank Diet Mountain Dew and National Guard and all of our supporters; Hendrick and all those people – they built a great race car. Our team did a good job on pit road. We're just trying to click away some good runs. We want to win a race or two here and there. If we keep running up front, that will happen."

WHEN YOU GO TO BED TONIGHT, DO YOU DREAM OF THE ONE THAT GOT AWAY?

“Well, when the caution is for a plastic (water) bottle on the backstretch, it’s hard to feel good about losing that one, I mean. And we gave it away on pit road. So we did everything we could to throw it away; it got taken away from us. That’s the best car I’ve had a Richmond in a long time. So I’m really proud of that and (crew chief) Steve Addington and I’m proud of our guys. But we’ve got some work to do on pit stops right now. I don’t know what their malfunction was but I’m pretty ticked off about it tonight."

CAN YOU PUT INTO WORDS WHAT HAPPENED ON THAT FINAL RESTART?
"We got…we lost it on a plastic bottle on the backstretch. For a caution for a plastic bottle, so you tell me how you'd feel."