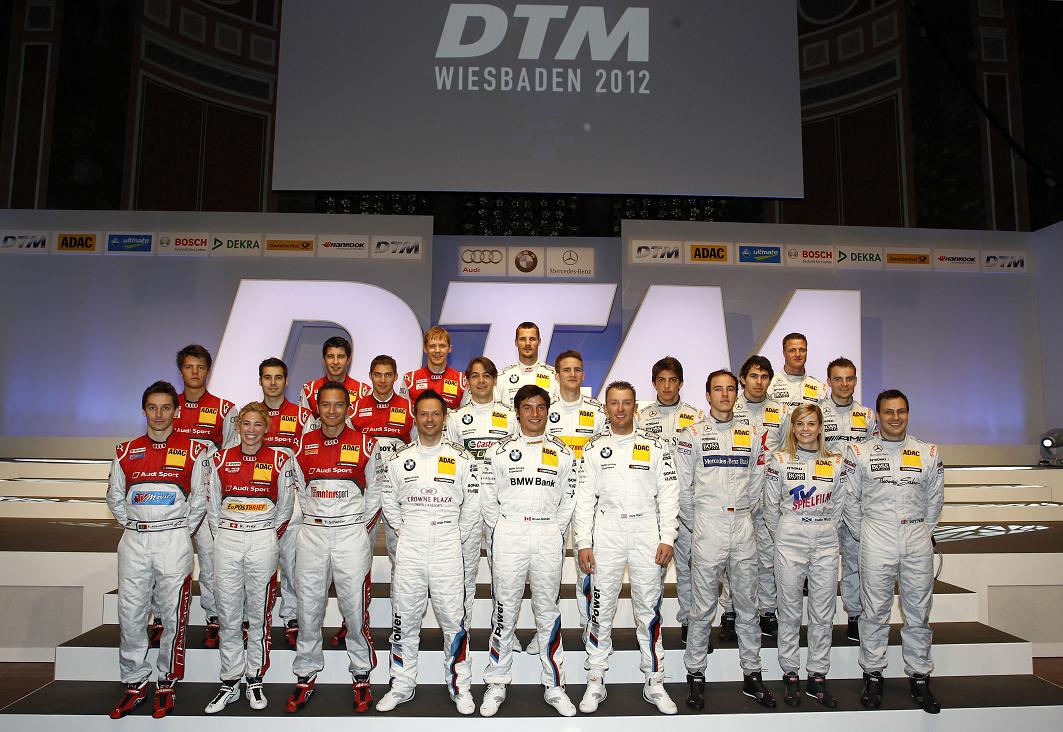 One week from now, on April 29th, the DTM has its season opener at the Hockenheimring Baden-WÃ¼rttemberg, and is looking forward to a new era. For the first time since 1992, the three German premium car brands Audi, BMW and Mercedes- Benz will be competing against each other again in the most popular international touring car series.

This Sunday already, teams and drivers presented themselves to the fans in the city centre of Wiesbaden as an appetizer of a very special season. Hans Werner Aufrecht, chairman of the board of the ITR, said: “I am really looking forward to the new season. Everybody knows about BMW’s heritage in motorsport, and therefore, I am sure that we will have great and entertaining battles between the three premium manufacturers on the track. It was great to see how close the three manufacturers worked together in the development of the new technical regulations. Surely a unique thing to date."

Next to BMW’s comeback, the introduction of the new technical regulations is one of the most important new elements in the DTM. The regulations were developed by the three participating manufacturers in close collaboration with ITR rights-holder and promoter ITR e.V. and the Deutscher Motor Sport Bund (DMSB). The most important premises for creating the new regulations were cost reduction, optimum safety for the drivers, retention of the race cars’ fascination and maximum equality of opportunities for all participants.

Another change in the 2012 season concerns the points system. For the first time, the DTM is also using the system known from Formula 1 that awards points to the top ten in the overall classification of a race. With 25 points the winner now clearly receives a higher score than in the past. The points for positions two to ten are: 18-15-12-10-8-6- 4-2-1.

Drivers are battling for points and the title on ten weekends in five countries. Traditionally, the Hockenheimring Baden-WÃ¼rttemberg is the venue of the DTM season opener and finale. In addition, the DTM is represented in Germany with rounds at the Lausitzring, the Norisring in Nuremberg, the NÃ¼rburgring and the Motorsport Arena Oschersleben. The calendar is complemented by four rounds in other European countries. The venues are the tradition-steeped circuits of Brands Hatch in Great Britain and Zandvoort in The Netherlands, the Red Bull Ring in Spielberg, Austria, as well as the Circuit de la Comunitat Valenciana Ricardo Tormo near the Spanish city of Valencia. The event in Munich’s Olympic stadium, that had a successful premiere last year, will be a very special highlight, but doesn’t count towards the championship.

The Audi A5 DTM will be raced by the two two-time DTM champions Mattias EkstrÃ¶m (S) and Timo Scheider (D), Swiss lady racer Rahel Frey, Adrien Tambay from France, Mike Rockenfeller (D), Spaniard Miguel Molina, Edoardo Mortara from Italy and Portuguese Filipe Albuquerque. Audi’s head of motorsport Dr. Wolfgang Ullrich is looking forward to the upcoming season: “Creating something together, that is the spirit of the DTM. With the development of the technical regulations, we have succeeded in doing so and this will continue throughout the season." Moreover, Dr. Ullrich added with a smile: “However, it is also clear that friendship is over when the first race comes, at least during the weekend."

DTM returnee BMW has signed up Canadian Bruno Spengler, German Dirk Werner, three times’ world touring car champion Andy Priaulx (GB), Augusto Farfus from Brazil, defending DTM champion Martin Tomczyk (D) and American Joey Hand to drive its BMW M3 DTM cars. BMW’s motorsport director Jens Marquardt: “At last, we are on the finish straight after the many tests. 2012 will be a learning year, because we haven’t been in the DTM for 20 years. But we are ambitious and motivated to make up for the advantage of the others quickly. Our driver line-up is well-balanced and I am very confident."

With Spaniard Roberto Merhi and Canadian Robert Wickens, Mercedes-Benz is bringing two new drivers to the 2012 DTM. Together with Christian Vietoris (D), they are the Mercedes-Benz Junior Team for the DTM, under the patronage of seven times’ Formula 1 world champion Michael Schumacher. The other drivers to race the DTM AMG Mercedes C-Coupé are Brits Gary Paffett and Jamie Green, Ralf Schumacher (D) and Susie Wolff and David Coulthard, both from Scotland. Mercedes-Benz’s head of motorsport Norbert Haug: “The new era of the DTM is the third generation of the series. Together with Audi, we have staged great races for six years and created a stable platform for a new start with a third manufacturer. From now on, the world’s three best car manufacturers are battling for victory in the DTM."

The field includes drivers from eleven countries. With six drivers, Germany has the strongest representation, followed by Great Britain with five and Canada and Spain with two each. Brazil, France, Italy, Portugal, Sweden, Switzerland and the United States each have one driver.

For all those who can’t attend the races along the circuits themselves, television partner ARD is broadcasting all qualifying sessions and races live. On Saturday, the ARD is reporting from 13.35 till 15.00 h, on Sunday from 13.45 till 15.30 h from the DTM race circuits. The entire coverage is also available in HD.

With the Formula 3 Euro Series, the Porsche Carrera Cup Deutschland and the Volkswagen Scirocco R-Cup, three DTM partner series are also presenting themselves to the fans during the DTM race meetings. Like in previous years, spectators are not only being treated to great motor racing action, but also to a varied show and entertainment program including live performances by popular artists.

In spite of rain, 72.000 fans celebrate DTM In Wiesbaden, Germany

A great backdrop for the start into the new era of the DTM. In spite of changing weather conditions with sun, rain and hail, 72,000 fans flocked to the centre of Wiesbaden, the capital of the German province of Hessen, to witness the DTM presentation. The official unveiling of the Audi A5 DTM, the BMW M3 DTM and the DTM Mercedes AMG C-Coupé and the presentation of the drivers were followed by a varied show program for the entire family.

The event was hosted by Verena Wriedt and her colleague Claus Lufen from TV partner ARD. “For the third time already, Wiesbaden is hosting the presentation and thus, it is a tradition in the DTM", said Lufen. The mayor of Wiesbaden, Dr. Helmut MÃ¼ller, summed up his role as a host: “The DTM is simply fun for us."

The fans and drivers also had plenty of fun. “The DTM is known for being very close to the fans anyway, and we are getting really close here in Wiesbaden. Talking with the fans in this great atmosphere is really fun", said Audi driver Timo Scheider. His colleague from BMW, Bruno Spengler, also enjoyed the interaction with the crowd. “It really sends me shivers down my spine when I see how excited the fans are and how they are enjoying the show." The drivers signed autographs for hours on end and smiled into the visitors’ cameras. “Seeing the excitements of the fans is a great experience and makes the anticipation of the first round next Sunday even bigger", said British Mercedes-Benz driver Gary Paffett.

Next to interviews with the DTM stars, the spectators got a close view of pit stop competitions and demonstration laps with the DTM cars from Audi, BMW and Mercedes-Benz as well as the race cars from the partner categories Formula 3 Euro Series, Porsche Carrera Cup and Volkswagen Scirocco R-Cup. An old-timer parade sparked nostalgic feelings, a motorcycle stunt show provided action. Grid-girl photo shoots and the presentation of the Wiesbaden Phantoms’ cheerleaders were additional optical highlights along the Wilhelmstrasse. On the giant DTM show stage, the band “Stereolove" performed the official song of the 2012 DTM, “This is it". After that, a live performance by top act Stefanie Heinzmann also thrilled the fans.

Next weekend (April 27th till 29th), action starts in earnest for the 22 DTM drivers when the first of ten DTM rounds takes place at the Hockenheimring Baden-WÃ¼rttemberg