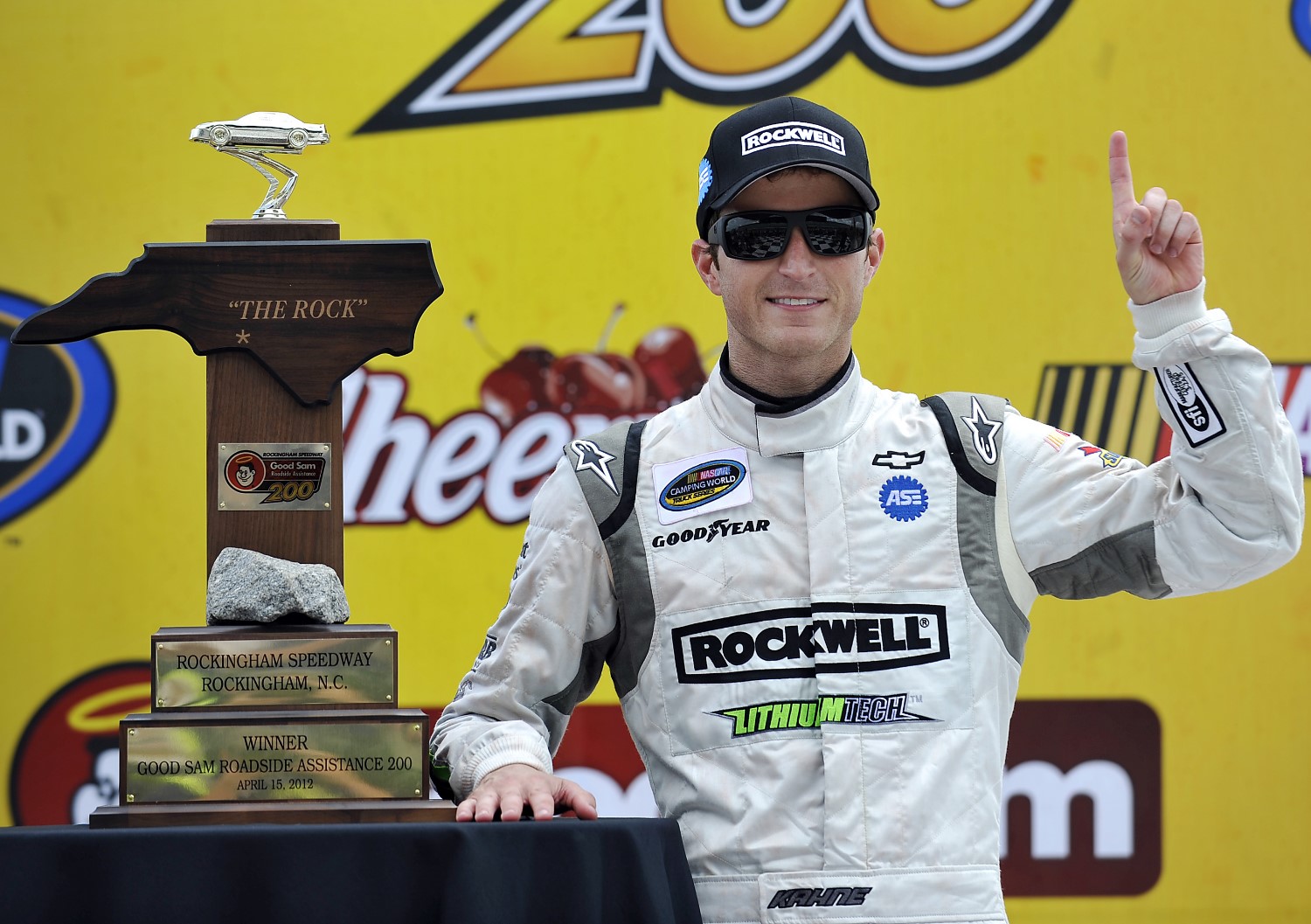 In his rookie season in 2004, Kasey Kahne lost out on his bid for his first career NASCAR Sprint Cup victory after Matt Kenseth edged him at the finish line in what turned out to be the last NASCAR event at Rockingham Speedway.

Kahne came from the back to the front, leading the final 46 laps and beating out teammate James Buescher over the final restart for his fourth truck series victory in just five series starts.

“Feels good to come back to The Rock and get a win," said Kahne. “I knew we had a good truck. We’ve had really good success and been fortunate enough to race really good trucks.

“This is probably the best weekend I’ve had in a long time. I got out of the truck and realized I had three clean race cars – I raced hard this weekend and not a dent on them."

Kahne was one of the few drivers in the field with any experience at the 1-mile oval, his only start being one of the most memorable in the history of the track.

“I’ve raced that race in my mind ever since that, trying to figure out how I could have beat Matt (Kenseth)," said Kahne of his losing last-lap effort in 2004. “I just kept trying to get by him off of two and I never got by him.

“As soon as I heard about this race, I was trying to figure out who I’d race for and how I’d get here from Texas."

With Kahne unable to make Saturday’s qualifying session, Brad Sweet put the no. 4 Chevrolet Silverado into the field in fifth place, meaning Kahne had to start the 200-lap event at the rear of the field. Once under green, Kahne quickly began tearing his way through the field, moving into the top ten by lap 70.

Polesitter Nelson Piquet, Jr. led 107 of the opening 123 laps, trading the top spot with Crafton before a speeding penalty on pit road put him at the tail-end of the field.

Crafton, who led 40 laps, fell victim to a tight race truck and started to fade before losing the top spot to Kahne on lap 155.

A final caution flag with 20 laps to go gave the front runners one last shot at Kahne, with Buescher coming off pit road in second to challenge Kahne for the win.

Kahne held the top spot on the restart and quickly pulled away, eventually opening u a 1.5 second lead over Buescher at the finish.

“A good 1-2 finish for Turner Motorsports," said Buescher. “We qualified terrible so we didn’t start that great. In the middle of the race we went the wrong way on adjustments and got really loose and fell back a little bit. On the last adjustment, we started going forward again and the pit crew did excellent on the last stop and got us up ahead of Matt and 17 and put us up on the front row to race Kasey for the win.

“Just not having that clean air in the end hurt us a little and Kasey was able to pull away from us."

With a near sellout crowd, Sunday’s race was a triumphant return for NASCAR and a vindication for track owner Andy Hillenburg, who purchased the facility in 2007.

One of NASCAR’s earliest superspeedways, the track opened as North Carolina Motor Speedway in 1965, with Curtis Turner taking the inaugural victory.

The track was eventually purchased by Penske Motorsports, and hosted two Sprint Cup and Nationwide Series every year until 2003, when new owner International Speedway Corp – the parent company of NASCAR – transferred one of its races to ISC’s California Speedway.

With only one race on the NASCAR schedule, Rockingham hosted its last race on Feb. 22, 2004, and shortly thereafter the track was sold to Speedway Motorsports, Inc., who shuffled Rockingham’s lone race date to Texas Motor Speedway.

After sitting idle for three years, Hillenburg – a former ARCA Series driver – bought the facility and began an extensive renovation project, eventually bringing the ARCA RE/MAX Series to the track in 2008, and this season finally securing a stand-alone NASCAR truck series event.

Hillenburg, making his way through the grandstands prior to the start of the race, received a standing ovation from the crowd.

“The show that was put on was everything that I’d thought it would be," said Hillenburg. “Seeing those guys getting on and off the gas pedal and going three wide as soon as they dropped the green flag – that’s what Rockingham is all about.

“I hope we made NASCAR proud. I feel really good about our event. It was a great race, it was a great crowd, it was a great day, surrounded by wonderful people everywhere I go. I want to get back NASCAR’s report card. I hope I get an A-plus."