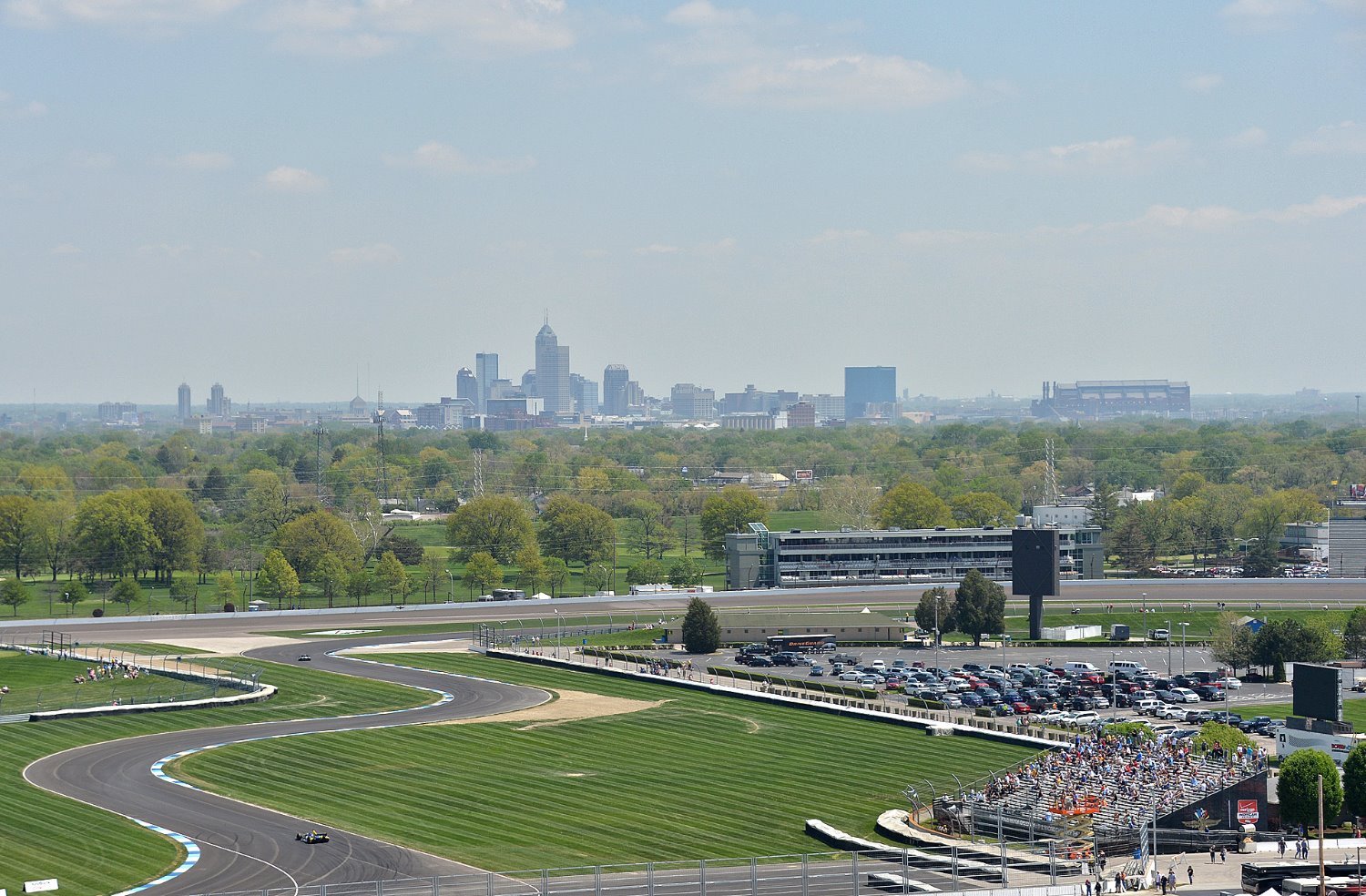 It was a nice day at the Speedway today with sunny skies. The crowd was small, as expected, but it was a Thursday and it was a work day. With rain in the forecast tomorrow, this place may be a ghost town again, which would be unfortunate. The jury is still out as to whether fans come out for a road course race at the Speedway. Track personnel are hopeful and about 2/3 of the 225,000 permanent seats will be open for the race. There are infield mound viewing areas as well. Even if they get 50,000, it is not going to look like 50,000. 50,000 is not a bad IndyCar crowd.

The key for the Speedway is that ABC TV is doing this race, qualifying and then the Indy 500. So the buildup for the 500 will be good.

Although he knew all about the Indy 500, did you know that Russian rookie driver Mikhail Aleshin had never been to the USA until this past November? "Although I followed the Indy 500, I had no reason to come to the USA until now, but I have been living in Indy since January and I really like it. It is as cold as Moscow, which I did not expect. By living at Indy I am able to be at the shop every day with the team, which is good."

We asked him about the Obama sanctions that have been placed on Russian businesses because of the situation in the Ukraine. SMP, the bank behind his sponsorship, is one of the entities whose assets have been frozen. When asked if his sponsorship was in jeopardy his response was, "sorry I cannot talk about it."

Fast man for the day Scott Dixon expects the rain tomorrow will wash all the rubber off the track, but he does not expect any ponding of water on the track. "When it rained before one of our test sessions here the track drained very well, they have done a good job with the redesign. Mike Canon, Dale Coyne engineer for Justin Wilson said the drivers are happy with the grip of the asphalt used here. Drivers say the track has so much grip the IndyCars drive like F1 cars – they really grip up and accelerate off the corners.

Did you know that Scott Dixon would like to someday try the 24 Hours of LeMans, but only if Chip Ganassi decides to expand into that area. He says he would not be allowed to do it with another team.

Although this is the lowest downforce non-oval race of the year, tire wear has been fairly good. The cars slide around more when the cars have less downforce, but Scott Dixon told us he was 6th on the time charts today with 26 laps on the tires. That is more than a full stint.

Jimmy Vasser feels the wrong call was made on his driver at Barber when Sebastien Bourdais hit Mikhail Aleshin from behind under braking. He does not feel that the evidence was conclusive because the officials did not see enough video of what happened on the straight before the cars came over the crest of the hill and entered the braking zone.

"When I looked at the tape I saw spray in the air which meant Aleshin was probably on the left (wet) side of the track to block Sebastien. It appears to me that he then moved right (the dryer line) in front of our driver as they crested the hill and began to brake and Sebastien was already committed to that line and had nowhere to go.

"We have had the speed this year and eventually the results are going to come. We are giving Bourdais what he wants instead of telling him what he will get and it is working. He is fast, but we have just had some bad luck. Twice we have been penalized while running in the top-5 and have had to come down pit road for a stop-and-go. That really hurt given we have new sponsors and we need the results.

"I just wish the vote had to be unanimous (3-0) by the three judges of an incident since you are essentially destroying a drivers race when you penalize him. It should be beyond all doubt (3 votes to none) if you are going to destroy the race for a driver. In our case the vote was 2-1, so at least one judge thought there was doubt about what really happened between Bourdais and Aleshin at Barber."

We hear pretty much the entire crew on the #11 Bourdais car, including Bourdais himself, have signed a 2-year deal so they will be together for at least this year and next.

Rumor has it that two drivers who have competed on the same track previously may not be allowed to drive the two-seater cars at the same time henceforth. As the rumor goes……at Long Beach Mario Andretti checked out in one of the two seaters and Arie Luyendyk Sr. tried to keep up and spun out the other two seater car. If they had hit the wall and the passenger had been hurt, that would not have been good.

A 2014 Corvette Stingray convertible will serve as the pace car for the inaugural Verizon IndyCar Series Grand Prix of Indianapolis this weekend.

"Chevrolet and the Indianapolis Motor Speedway have such a long history together, so it is exciting to be able to produce another ‘first’ at the famed Brickyard," said Jim Campbell, Chevrolet vice president of Performance Vehicles and Motorsports.