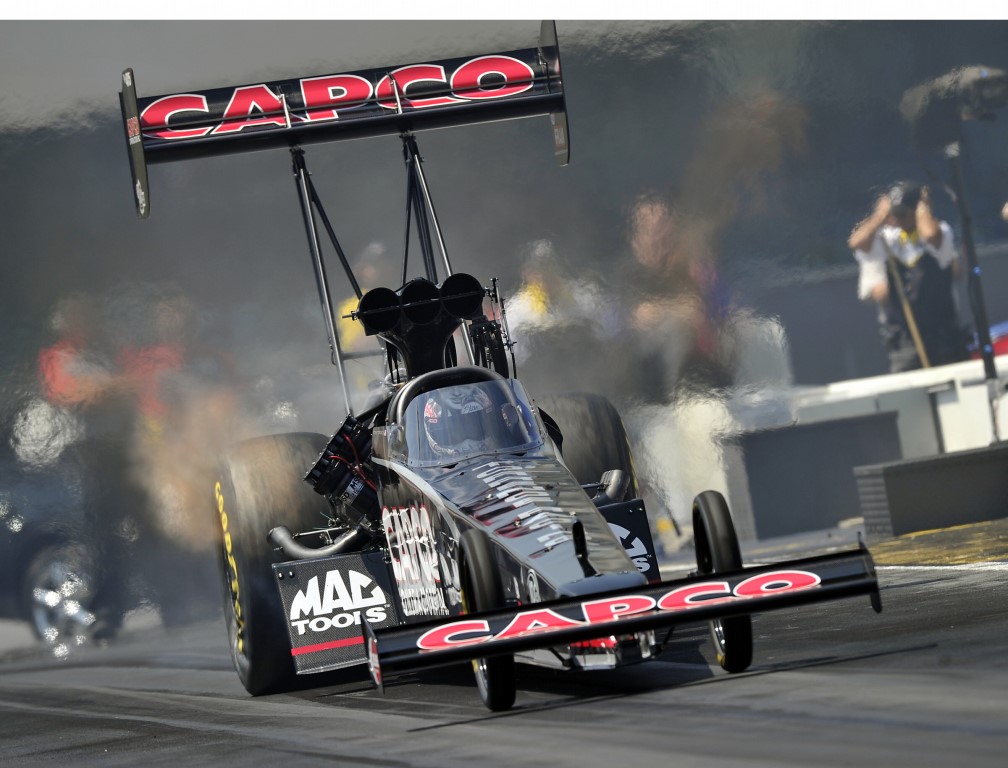 Robert Hight rebounded from two dismal performances on Friday to post his third no.1 qualifier spot in the last five events, while Jason Line’s record setting run kept him atop the Pro Stock ladder for the second straight race.

The 29-year old Torrence, driving for his own family-run operation, has four Top Alcohol wins under his belt but had previously not made it past the semi-final round in Top Fuel. His best previous qualifying effort was a pair of runner-up showings.

“This is a blast. Any time you’re No. 1 at anything is great. This is a new team. I’m real happy to get that No. 1 spot, this first of my career. That just goes to show the hard work and dedication that they guys have put in," said Torrence. “I really felt confident that .79 would stay where it was at being as it was warmer today and those conditions last night were really good. It gives me a lot of confidence going into tomorrow that I’ve got a good race car, and tomorrow ET’s don’t matter; it’s all about the win light."

Chris Karamesines accidentally ran over one of his crew members while preparing for his final qualifying run. The crew member was shaken up but not seriously injured. Karamesines did not make another attempt and did not make the field for Sunday’s event. Doug Herbert and Brady Kalivoda also failed to make the show.

After two aborted runs down the quarter-mile on Friday left him on the outside looking in, Robert Hight roared to the top of the pylon for the second event in a row with a time of 4.074 at 317.19 mph in Saturday’s opening session which proved to be enough to push him past Ron Capps and solidify his 42nd-career no. 1 qualifier spot.

“It was a long night last night. It’s not a position that we’ve been in this year," said Hight. “My car has been running so well, but it was kind of comforting knowing we were on the slow side of it. Jimmy Prock (crew chief) has no problems making more power and making it go faster. That’s easy for him. If we were on the other side of it where we were fast and having to slow it down, I’d have been really nervous.

“I would have a little more confidence if we had more than one run going into eliminations, but we hit it out there again tonight and shook. It was slow, so Jimmy will fix it tomorrow. We definitely have to get on the other side of it and make the thing faster, and if you do that, I have a good feeling this Auto Club car could be low ET every round, just like it was the first run today. I’m looking forward to tomorrow. Four wide is exciting."

Capps didn’t go away quietly – just two weeks after failing to qualify at Las Vegas, Capps grabbed the top qualifier position on Friday only to get blown away by Hight on Saturday. But Capps came marching right back and claimed the second position with a time of 4.092 at 311.99 mph.

Jason remained the leader in the Pro Stock division for his third no. 1 qualifier of the season.

Having set the national speed record of 213.91 mph and besting the track ET record with a 6.493 in Friday’s session, Line had little to worry about coming into Saturday as no one was able to do better than 6.508 – that being second-place qualifier Allen Johnson.

Saturday’s pole is the fourth no. 1 qualifier at zMax Dragway for North Carolina native Line, however he’s never finished better than runner-up.

“I get along with this track in qualifying, but not so much on race day," said Line. “Today was not a great day. I got timed out on one round but anytime you qualify No. 1 it’s great.

“I made a nice run on Q4, when I got timed out; in fact it might have been the first 214 mph run but we’ll never know. I got a little confused up there and didn’t realize which light I should have been looking at. Thankfully, it happened today instead of the first round tomorrow. That’s the only way you can look at it."