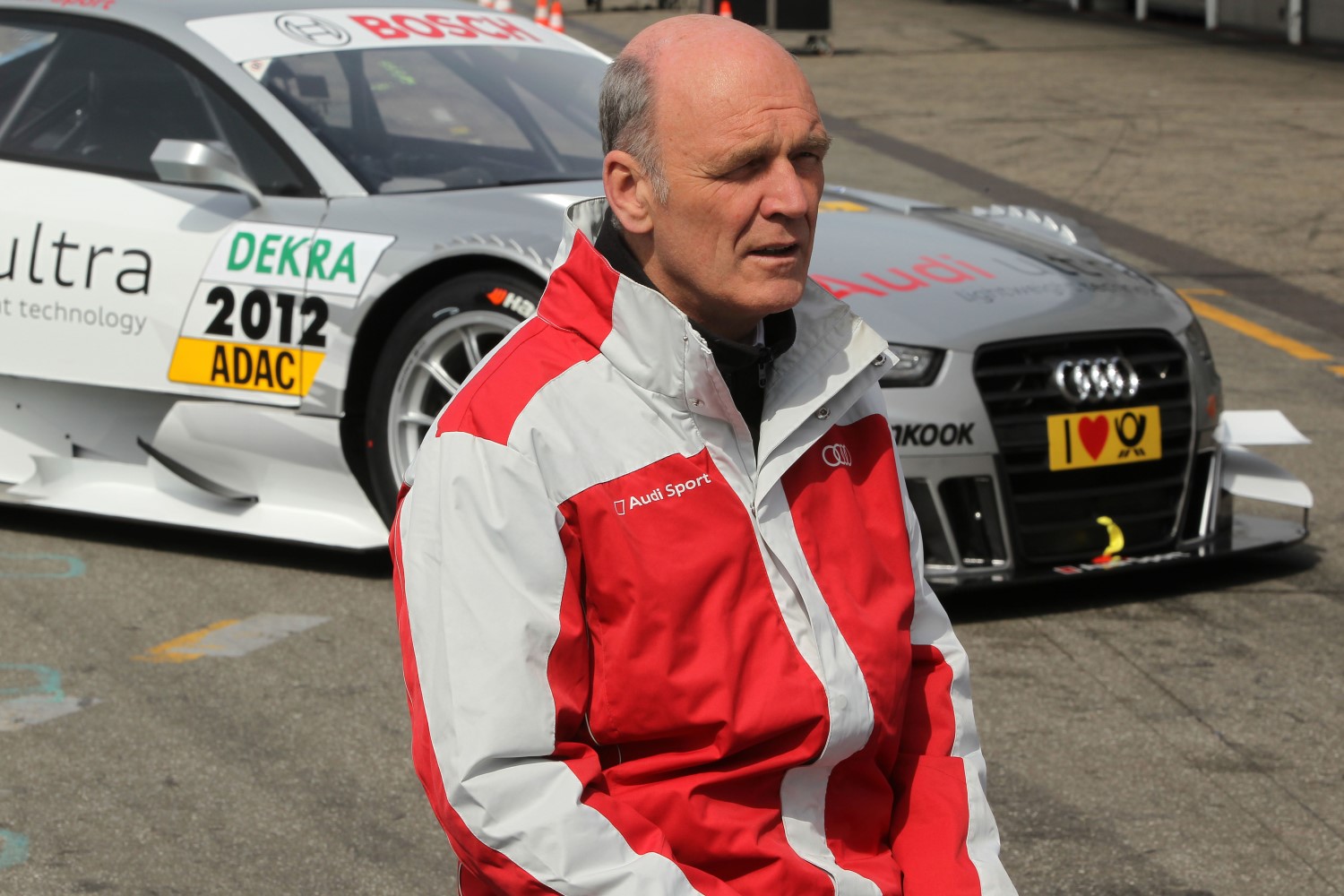 Dr. Wolfgang Ullrich played an instrumental role in shaping the new DTM regulations. Here is a keynote interview with the Head of Audi Motorsport on the start of the DTM season at the Hockenheimring on April 29 and the expectations of Audi Sport.

Dr. Ullrich, in 2012 the DTM begins a new era and you’ve been intensively involved in creating it. What was special about preparing for the new DTM season in your view?
The three manufacturers involved jointly developed a completely new set of regulations – including numerous standard components. This has never been the case before in this form and is no doubt very special. The regulations raise the safety standards to a level previously unknown with touring cars while reducing the single costs of the vehicles.

What is the significance of the DTM for Audi?
The DTM makes it possible for us to be active in top-caliber motorsport close to the product – and largely in Audi’s home market Germany – which continues to be an important one for us.

How does the result in the DTM impact on the Audi brand?
Our customers and potential customers of course take note of success in motorsport. It automatically reflects on the sportiness of the brand. The best way to demonstrate your sportiness is to be – successfully – active in sport. Through our motorsport successes we can no doubt continue to positively influence Audi’s brand image.

You’ve been at the helm of Audi Sport since 1993. Are the four rings ingrained in your heart after such a long time?
I’ve always been absolutely convinced of the Audi brand. I’m with Audi because for me it’s the automobile brand with the most exciting and successful history – and I am proud helping to shape this.

The three German premium automobile manufacturers, Audi, BMW and Mercedes-Benz, are competing against each other for the first time in 20 years. What are you expecting of the 2012 DTM? And not strictly speaking in a sporting sense.
This is a great opportunity for the DTM to yet again improve its position as one of the best touring car series. I personally believe that we’ve even got the chance to jointly get the world’s best touring car series off the ground. Obviously, this means that the three manufacturers will also have to work together a lot, aside from the competition on the track. My wish is that even during the racing season we’ll be able to continue to collaborate in the good spirit that existed for a whole year during our preparations.

Now that there are three manufacturers, how does this affect the collaboration?
Like in a sandbox, it generally tends to be more difficult when there are three players than just two. But the spirit that has been prevailing so far in the first year of preparing for the DTM makes me look toward the future with optimism.

The sporting aim for 2012 can only be: title defense – right?
It goes without saying that our aim is to defend the title. Yet our first aim is to have cars that are in contention for victory. And then we want to do everything within our means to defend our title. It’ll no doubt be even more difficult than in the past – but with our driver line-up and three proven teams, all of which are starting into the new DTM with equal opportunities, we should be in a very good position. The DTM has been and will continue to be a matter of teamwork.

Have Audi and Mercedes-Benz got advantages with their DTM experience?
Naturally, experience gives you a minor advantage. On the other hand, a brand new entrant may have the benefit of doing certain things in a different way, which may prove to give them a minor advantage. It’ll be very interesting.

In your assessment, how strong is newcomer BMW?
BMW has been very intensively preparing for the DTM for more than a year and, just like Audi and Mercedes-Benz, developed a new car according to new regulations which are the same for everyone. In view of the touring car know-how that BMW has gathered in many years of work in the field, we’re expecting to meet with a very strong rival – and that’s exactly our assessment of BMW right from the first race weekend on.

There will even be more identical parts in the DTM than before. Considering this, how can a manufacturer individually stand out from the competition?
The identical parts concept does not impair this. You can develop a defined area of aerodynamics; you can make manufacturer-specific developments of the suspensions. The engine is a specific component for each manufacturer. Even the overall package can be optimized by each manufacturer within certain limits. That’s why I certainly see sufficient possibilities for all manufacturers to not only develop the outer shell specifically for their brand but additional components that are relevant to success as well. From the 4,000 parts of an A5 DTM just about 50 are spec-parts.

What are the special features of the A5 DTM in your view?
For me, the A5 DTM is the most beautiful car of the three new DTM vehicles. Plus, I think that in terms of providing the base, the A5 is a very good car for the DTM that not only looks good but which our guys have also turned into a very good race car. I’m hoping that in the A5 we’ll have a car in our hands that is good and in contention for victory right from the first race on.

What are the areas in which the A5 DTM is particularly innovative?
Principally, we’re talking about a lot of detailed work in the DTM. Particularly in the area of aerodynamics and suspension kinematics all manufacturers have tried to work out their little advantages – and, naturally, we’re hoping that we’ve successfully managed to do this.

The engine was adopted from the "old" DTM. When will the DTM opt for new technologies, such as a hybrid system like the one used in the new Audi R18 e-tron quattro?
We didn’t want to take too many steps at once. That’s why we initially adopted the existing engines for the new vehicles. This engine concept has been proving its viability for many years. Room for a hybrid system has already been reserved in the vehicle concept though. We will jointly define if and when it will make sense for the DTM to switch to a different engine concept.

How important would be – or is – the DTM as a topic in Japan and in the USA?
For Audi, the USA is no doubt very important. And Japan is a prestige market as well. This means that Audi has a strong interest in also being able to show its presence in these two countries that are important to the brand. The three manufacturers and the ITR are working together on taking the DTM to both Japan and the United States. But everyone should be clear about the fact that this is not something that will happen very quickly. It requires a lot of detailed work. If you want to turn this into a really good thing, you need patience and time.

Back to the 2012 season: Six vehicles were originally planned, now there are eight. How did this come about?
Last year, we were already poised to field eight vehicles in the DTM and are assuming that in 2013 all manufacturers will put at least eight cars on the grid. Due to the fact that we had to develop an extremely challenging hybrid car – the Audi R18 e-tron quattro – for the Le Mans 24 Hours and a completely new DTM vehicle in a parallel project, we were initially planning for seven cars for 2012. I’m pleased to see that now the opportunity of fielding eight cars has materialized. I’m convinced that in view of the DTM’s high caliber it’s advantageous to put the maximum number of cars on the grid. It’ll probably be very close – but one additional vehicle also means one additional opportunity. And an even number makes more sense than an odd number in terms of logistics and team effort.

In the past, there were many behind-the-scenes discussions about a lack of overtaking in the DTM. Based on the track tests, are there any findings of how the situation will look with the coupes?
On the A4 DTM we had a large number of very small aerodynamics components especially at the rear that would quickly be damaged in incidents of slight body contact and then severely change the car’s performance. Accordingly, it was necessary to drive in a way that would prevent the risk of suffering an aerodynamic disadvantage. The new regulations are trying to stop this. Of course that doesn’t mean that the drivers can now constantly run into each other’s cars. But I do believe that the rules will at least be conducive to more duels – and thus more overtaking maneuvers.

What can the fans expect of the new DTM in general?
The three German premium manufacturers in a high-caliber championship with vehicles that visually are heavily oriented to well-known and popular production cars should thrill any true touring car fan. In its new form, I see the DTM as the world’s strongest touring car series, albeit one that is just moving into its first year in this new form.