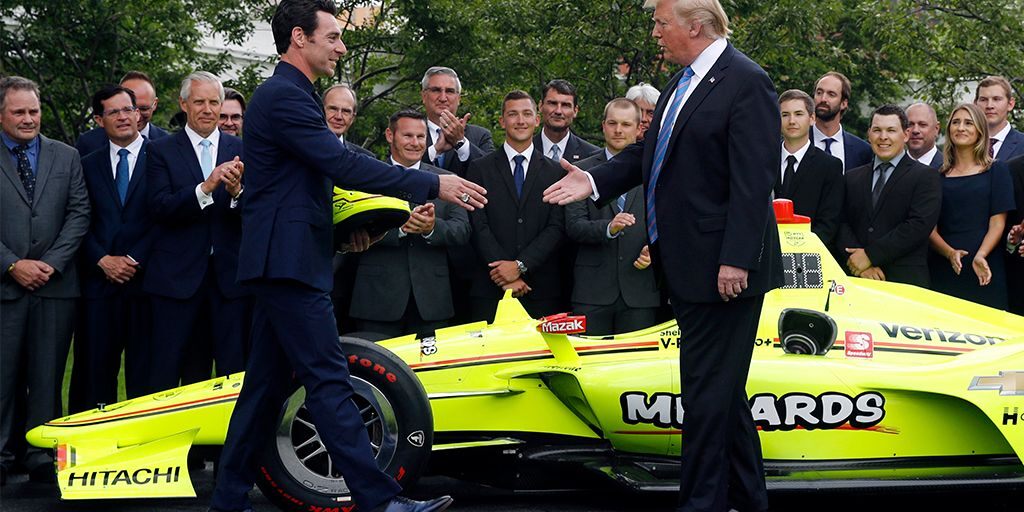 Trump called Pagenaud an "incredible racer," and said he's been a longtime friend of Penske – a businessman in the automotive industry involved in both IndyCar and NASCAR racing.

"It's a great honor to introduce the winner of the Indianapolis 500, Simon Pagenaud," Trump said. "He is an incredible racer."

He continued, "I happened to be watching that one because my friend [Penske] is somewhat involved with racing."

"This is an incredible machine," the president added, pointing to Pagenaud's neon green #22 Menards car.

"The job that Simon did, if you saw that, that was talent and it was a lot of courage – because I wouldn't do it… even for that trophy."

Pagenaud narrowly held off Alexander Rossi to take the checkered flag on May 26 in Indianapolis.

"I love NASCAR, because they endorsed me," he said with a smile.

Later, Pagenaud thanked Trump for the invitation and said it was a privilege to represent his home country, France, at the White House.

"As a Frenchman, it's such an honor to represent my country here today, in the biggest race in the world. Especially, being invited to come to the White House with President Trump, is a phenomenal achievement," he said, going on to give credit to Penske and his team.

Pagenaud offered Trump a helmet as a thank-you gift for the visit.

Penske also thanked Trump for the invitation and offered praise for Pagenaud, his team and the president himself.