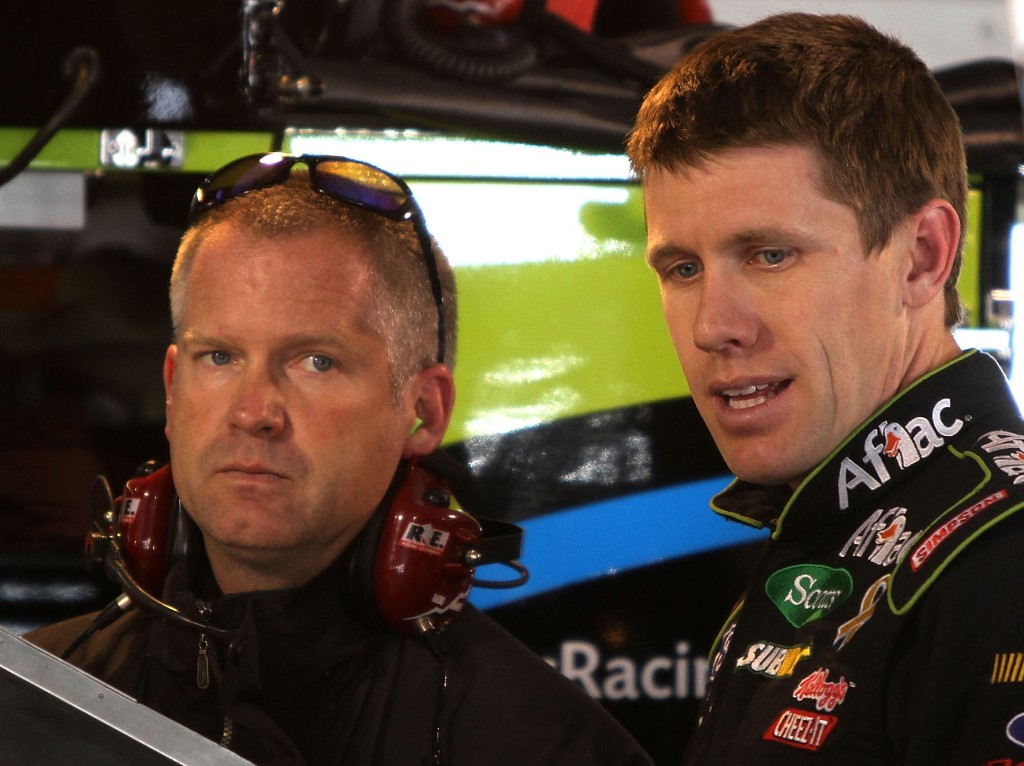 Bob Osborne, crew chief of the No. 99 Aflac Ford Fusion of Carl Edwards, heads to Charlotte Motor Speedway for Saturday night’s Bank of America 500 with a one point lead in the NASCAR Chase for the Sprint Cup championship standings. The lead came after turning what could have been a crushing day at Kansas into a fifth place finish. Osborne talked to Ford Racing about several topics prior to this weekend’s race.

DOES ANYTHING CHANGE FOR YOU PREPERATION WISE, IN RACE CALLS, ETC. WHEN YOU ARE AT THE TOP OF THE POINTS STANDINGS? “No, it really doesn’t. We still focus on trying to build the best cars we can and makes as few errors as possible. We look for the best setup we can put in a car and the best finish we can get out of the race. That really doesn’t change. We do definitely take the time, not that we don’t put emphasis on it during the weekend, but in this situation everyone is taking a little extra time and checking things over twice I’d say. Normal day to day operations, everybody is being extremely cautious on what they do. Hopefully it pays off for us at the end."

THERE HAS BEEN A LOT OF TALK ABOUT TEAMS TAKING “BIG SWINGS" AT THEIR CAR. WHAT DOES THAT MEAN EXACTLY? “I think what they are referring to is if the car isn’t handling quite the way they want it in the race they make a bigger than normal, larger than normal adjustment. Let’s say normally we will do a round of wedge on a pit stop to tighten the car up. If the car is far off, you will see them do two or three rounds of wedge or something like that. It is just a bigger adjustment at the setup to try to get the car to come into shape."

ARE YOU MORE OR LESS INCLINED TO DO THAT BASED ON WHERE YOU SIT IN THE STANDINGS? “No, not really. It all depends on how the car handles. If the car is not handling well and we are not capable of running the speeds we need to perform well then we will take a big stab at trying to get the car right to perform at the level we need to."

WHAT ARE THE ADVANTAGES OR DISADVANTAGES, IF ANY, TO HAVING BEEN IN THIS POSITION OF CHASING A TITLE BEFORE? “I don’t think there are disadvantages. Anytime you have experience at something you are going to be better off. I think that 2008 was a good experience for us. Obviously I would have liked the results to have been different. It definitely is good to have that experience and hopefully not let anything creep up on us that happened in 2008."

CARL HAS PUBLICALLY STATED HE IS NERVOUS HEADING TO MARTINSVILLE. THAT HE ISN’T SURE WHAT TO EXPECT THERE. WHAT ARE YOUR FEELINGS ABOUT THAT RACE? “That is definitely a race track that we are looking at to be probably the most difficult for us in this series of races. We’ve run well there. We’ve run poorly there. I think we have enough notes and package going back that is going to be competitive. We will just have to wait and see what we get when we unload there and start practice."

YOU JUST CAME FROM THE TEST AT PHOENIX. WHAT DID YOU LEARN ABOUT THAT PLACE NOW THAT IT IS REDONE? “Yeah, I still like Phoenix a lot. There are definitely some issues that are going to have to be overcome when we go back there for track grip and multi-lane racing. Right now it is a one lane race track and that is not going to bode well for racing. It is going to be a little scary if they don’t get two lanes at least going there."

PRESSURE IS A BUZZ WORD AROUND THE GARAGE LATELY. CARL ADDRESSED IT AND TALKED ABOUT HOW IT MOUNTS AS THE WEEKS GO BY. DO YOU FEEL THAT AS WELL? DOES YOUR CREW? “I think everybody feels it across the board on all the programs. It is just part of what we do. As it gets closer to the end of the Chase and there are fewer races to rely on for making points up or gaining points then you definitely feel more pressure to perform at a level. Even if you happen to be lucky enough to be number one in the points standings, you feel the pressure of maintaining that position. I think that everybody is used to it. Everybody goes through it. The necessity to perform well in this business is always there. I think everybody adapts well to the pressure and handles it well."

DO YOU EVER FEEL THE NEED TO ADDRESS IT WITH YOUR TEAM? “We talk about it every week. It is something that is part of our sport and you just keep it on the table and let everybody know what spot we are in and try not to let the pressure get to you and so on. It is all about talking about what is going on and being aware of the situation you are in. I think that makes it a little easier to deal with."

ARE THERE TRACKS DOWN THIS HOME STRETCH THAT YOU FEEL REALLY GOOD ABOUT? “We are taking it one race at a time. Other than worrying about Martinsville, and I think everybody worries about Talladega because of the style or racing that goes on there, we don’t highlight one particular race track as being a shoe-in for us because I don’t think you can. Anything can happen in these races regardless of your previous performance there. You’ve got to go into the race weekend with all of your ducks in a row so to speak and be prepared or you will get run over."

WITH EVERYTHING THAT HAS GONE ON THIS YEAR, CARL’S CONTRACT, ETC. HOW SPECIAL WOULD IT BE TO CAP THIS SEASON WITH THE TROPHY IN HOMESTEAD? “I think that regardless of what has gone on this season it would be extremely special to cap the season with the trophy for sure. I think everybody would be very happy with that result."