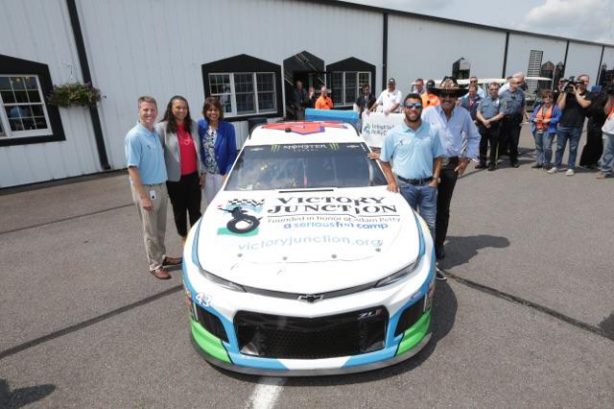 World Wide Technology (WWT), a market-leading technology solutions provider, in collaboration with Victory Junction, a camp committed to enriching the lives of children with chronic medical conditions and serious illnesses, today announced a special collaboration. Through a leadership donation to Victory Junction made by WWT founder and chairman David Steward and his family, Victory Junction will partner with Darrell "Bubba" Wallace Jr. , driver of the Richard Petty Motorsports (RPM) No. 43 Chevrolet Camaro ZL1.

Wallace will drive the No. 43 Victory Junction Chevrolet Camaro ZL1 in a select number of Monster Energy NASCAR Cup Series (MENCS) events in 2019. Victory Junction will retain partner benefits to be used for the benefit of their campers. More importantly, WWT's support of Victory Junction provides the camp with a profound cause-driven opportunity to raise awareness, and funds for their mission to provide life-changing camp experiences. The relationship also brings exciting opportunities for a key partnership with Wallace and Richard Petty Motorsports.

From the moment Wallace first spent time at Victory Junction in 2015, the smiles and laughter heard throughout the lush 84 acres in the rolling hills of Randleman, N.C. left an indelible mark and impact on the Mobile, Ala. native.

"Victory Junction not only gives opportunities to children that have boundaries in their lives – it gives them a chance to be a kid," said Wallace. "It's just an incredible place."

The Petty family established Victory Junction in honor of Adam Petty. Since opening in 2004, Victory Junction has delivered over 50,000 camp experiences to children and their families, and in celebration of their 15th anniversary season, WWT will leverage its strategic partnership with Wallace and Richard Petty Motorsports to donate to Victory Junction the creation and development of an advertising, fundraising and call-to-action campaign, "Feel Your Heart Race."

"I remember when I was a kid, having a lot of fun going out and doing things with my friends, and Victory Junction provides that and gives each child the opportunity to simply be a kid," said Wallace. "The camp makes these kids feel as special as they truly are. This is a great opportunity for NASCAR fans to support Victory Junction and make every kid feel special – to feel empowered. Fifteen years is a great accomplishment and I want to do my part to help Victory Junction reach another 15 years."

"Investments in diversity are critical for the long-term viability and future competitiveness of WWT. The same applies to the sport of racing. As the only African American NASCAR driver in over 40 years, we have been honored to support Bubba Wallace. With the Victory Junction alliance, we will celebrate and enable kids with diverse challenges and perspectives to reach their fullest abilities. 'What you have done for the least of of them, you have done for me.' Given our family's long history with Variety the Children's Charity, BJC Health System and St. Jude's, it was an easy decision to get involved with Victory Junction," Steward said. "Diversity matters. That is why we support Bubba. That is why we support Victory Junction."

"NASCAR fans connect with drivers like Bubba and the causes they care about, so we're excited for this opportunity to partner with Bubba Wallace, WWT and RPM," Chad Coltrane, Victory Junction president and CEO, said. "Thanks to the generosity of the Steward family and WWT, we'll be able to share the message of how Victory Junction helps children living with serious illnesses and medical conditions, and how fans can support that mission. We anticipate that other like-minded corporations and foundations will join WWT in the Victory Junction alliance in support of Bubba."

"The Steward family is blessed to support Victory Junction and their amazing work empowering kids with serious illnesses," said David Steward II, Polarity, Ltd CEO. "Given our family's shared values with Bubba, the Petty family and Victory Junction leadership, this partnership is a natural fit. We are grateful for the opportunity to make a meaningful impact in the lives of the Victory Junction kids and their families. Together, we will show a global audience that diversity in all its forms is important."

The Pocono Raceway, Mattioli family, and Petty family hold a strong connection. In 2001, Pocono Raceway paid tribute to Adam Petty by re-naming the garage area in his honor. The great-grandson of Lee Petty, grandson of Richard Petty, and son of Kyle Petty, Adam was the only fourth generation athlete to compete in the highest level of his sport.