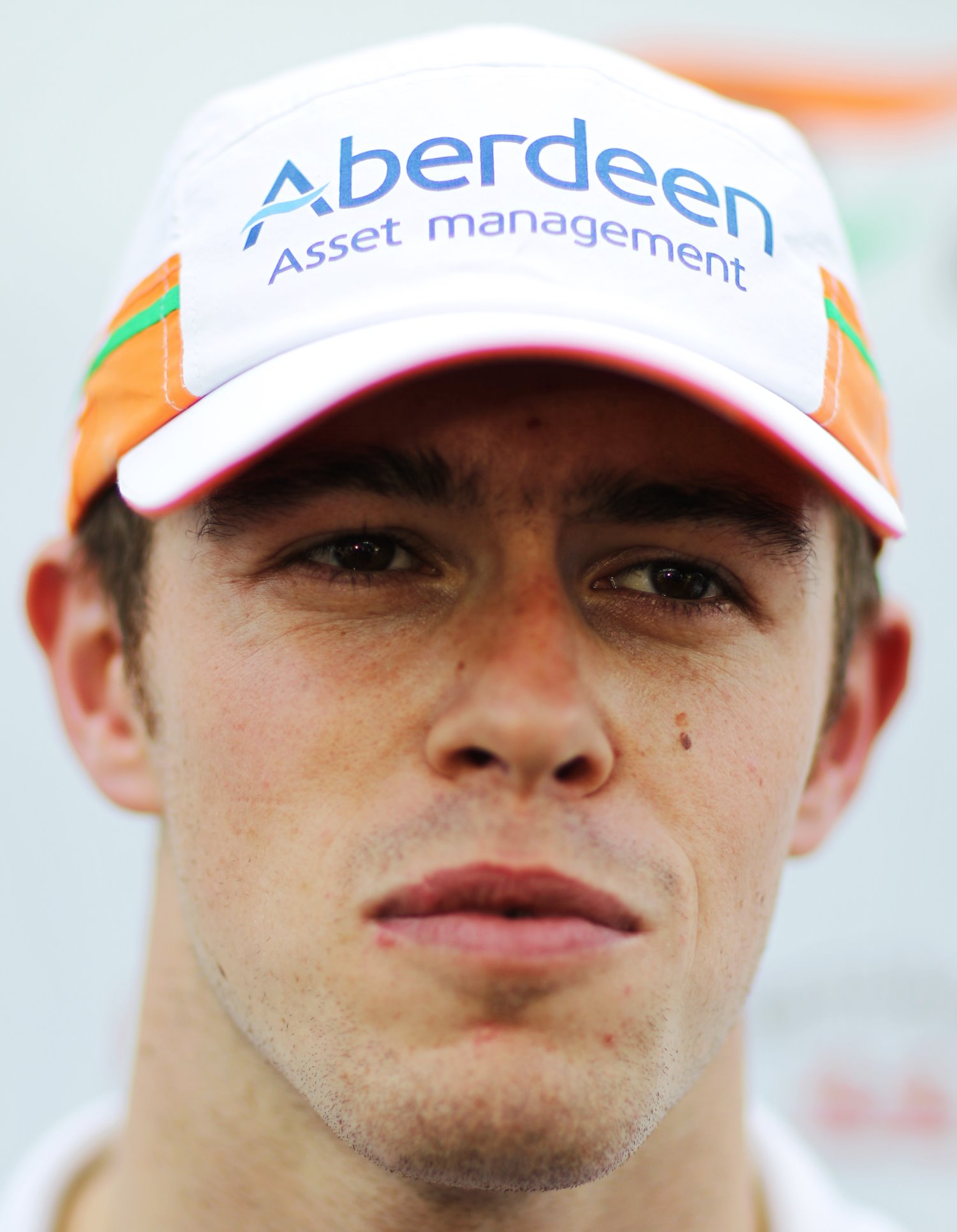 Bathgate’s Paul di Resta moved closer to a return to the German Touring Car Championship (DTM) next season after the IndyCar vacancy at Ganassi Racing was filled.

The 27-year-old Scot, replaced in Force India’s Formula One team this week by Sergio Perez – who brought with him around â‚¬15 million in sponsorship – had been talked about as a replacement in IndyCar for his cousin Dario Franchitti.

But following Franchitti’s enforced retirement through injury, team boss Chip Ganassi today confirmed he has signed the Australian driver Ryan Briscoe for the 2014 IndyCar season. While Briscoe will drive the Noâ€‰8 Ganassi car, Brazilian driver Tony Kanaan – winner of the Indy500 this year, and a close friend of Franchitti – has been given the honor of taking the Scot’s Noâ€‰10 car.

Though Di Resta had initially been linked with a switch to IndyCar, he admitted he had reservations about the safety standards in the US open-wheel racing series.

And Ganassi himself admitted the number of high-speed oval races next year, and the relative lack of testing opportunities, meant that his priority was to sign someone with IndyCar experience.

The IndyCar announcement comes 24 hours after Sauber announced it had signed Adrian Sutil as it’s Noâ€‰1 driver for next year’s F1 season.

The fact the German was outpaced, outperformed and outscored, 48 points to 29, by Di Resta – with whom he was a team-mate at Force India this season – appears to have counted for nothing.

What counts now clearly more than talent, is cash. While Di Resta carries no financial sponsorship package with him, Sutil has around Â£1m to boost the team…and essentially pay his own wages.

With Sauber now expected to confirm Mexican Esteban Gutierrez as Sutil’s team-mate, it is now almost definite that Di Resta will return to DTM – a title he won (pictured) in 2010 – with Mercedes.

“I’m not in a position to say what I’ll be doing next year," the Scot said, “but one thing I know definitely is that I’ll be in a competitive car, in a series I know I’ll be capable of not only winning races, but also the championship."

12/11/13 Paul di Resta looks set to return to German touring car racing after admitting his options in Formula One had all but dried up for 2014.

"It's looking likely that I will not be driving," confessed to Scot.

"(Force India) are speaking to me every two or three days," he explained. "They may be interested, they may not. I believe they are in talks with Sergio Perez."

After a strong debut season with Force India in 2011, and solid progress in 2012, di Resta was linked with a possible move to either Ferrari or McLaren ahead of the 2013 season. When neither drive materialized the 27-year-old's performances seemed to flounder, while public criticism of the team would not have endeared him to his paymasters.

It leaves di Resta in a vulnerable position, as last week Force India confirmed it had signed Nico Hulkenberg, though is yet to announce who will partner the German for 2014.

While di Resta admits there has been some contact with Sauber he also confessed it had not been especially serious, and with precious few others seats remaining it seems the Formula One door is closing on the man from Uphall.

Linked with a move to IndyCar racing in the United States as replacement for his cousin, the retiring Dario Franchitti, di Resta looks more likely to return to DTM where he won the championship in 2010.

12/11/13 (GMM) Paul di Resta has admitted that his formula one career appears over.

The Scot is being sued in London's High Court by former manager Anthony Hamilton, and during testimony on Tuesday, the 27-year-old admitted he is unlikely to return for a fourth season with Force India in 2014.

"They (Force India) may be interested, they may not," di Resta told the court.

"I believe they are in talks with Sergio Perez. It's looking likely that I will not be driving.

"The only team that really has any possibility is Sauber, (but) there has been nothing other than a chat with my manager.

"I am speaking to Mercedes-Benz for DTM," he added.

Di Resta, who outscored his teammate Adrian Sutil in 2013, drove for Mercedes throughout his earlier DTM career, becoming the German touring car series' champion in 2010 before entering formula one.

11/30/13 There is still a hive of activity of what is going to occur when it comes to the drivers’ market in Formula One, with some seats at Sauber and Sahara Force India still “currently" up for grabs for 2014, but it looks that with recent developments, Scottish driver Paul di Resta could end up being forced out of the equation when all is said and done.

He may have scored more points than his German team mate this season, but the 27-year-old cousin of now-retired IndyCar Champion Dario Franchitti is still being asked what is happening with his future come 2014. When the moment a driver, whose racing direction is so far unknown, mentions that they have “options," speculation arises, so it is a case of seeing what may be the most definitive options that Di Resta may have to decide from when it comes to moving on.

Granted that Force India have kept him on board for the last three seasons, but with increased speculation that Nico Hulkenberg and Sergio Perez may be heading to the Silverstone-based squad in 2014, what is potentially next for di Resta? There may only be two options.

He has a sound grounding when it comes to the DTM, having won the title ahead of Bruno Spengler at the last race in 2010 in Shanghai. His upturn in form, having started with Persson Motorsport, who have also fielded former-DTM driver and fellow Scot Susie Wolff, was indicative of a talent on the rise. His four seasons saw him increase in both confidence and race craft along the way, having made his mark before leaving for F1.

For three of the four seasons, he was promoted into the HWA squad, where Toto Wolff has a clear ownership interest on top of his current role as Mercedes-Benz Head of Motorsport, so it may not be such a bad idea to go back to an outfit that he knows well, but without Norbert Haug being there, it may be uncertain as to how seamless his transition is back into the squad.

Mercedes are currently assessing the feasibility of potentially extending their field of cars back to eight for 2014, but it is not yet known as to whether Stuttgart will proceed with this. It could be a lifeline for di Resta, as it first of all gives him that close link to Formula One in terms of competitiveness, including the fact that there are drivers who he has raced against before. It would be classed as a backwards step by many, especially with where Paul has been racing for the last three years, but he would be racing against rivals that he knows very well.

Then there is the fact that the Scot would have to learn a new car all over again, but it would be more of a level-playing field for him, as with the way that qualifying has been in consideration of lap times set. This could spur him on with that clear motivation to push harder, but then there is the condensed weekend program that has been in force since the beginning of the season, which could hurt him as a driver trying to the best job possible, but he will learn to re-adapt to a series that has been a good home to him.

In many respects, the only other option the Scot has when it comes to racing is a possible move like a lot of drivers that have not been able to fulfill their dreams of Formula One, could see him in a potential switch and follow the lead of his cousin Dario into IndyCar. After Franchitti’s nasty crash that also involved Takuma Sato at Houston, which ultimately forced his retirement from the sport a few weeks ago, the 10 seat at Chip Ganassi Racing is now vacant, with multiple names that have been linked with the seat.

Dario, along with the likes of the late Dan Wheldon, made a name for themselves in the series, having picked up their own championships and wins at the legendary “Brickyard," it may be a case that di Resta makes a move that could prove to be fruitful. Ganassi himself has said that the team would look to bring in a new driver, and with someone of Paul’s talents could prove useful to a top-flight team that is at the sharp end of the IndyCar field.

The 27-year-old would join the likes of Takuma Sato, Sebastian Bourdais and Justin Wilson as drivers that have made the move stateside and compete in IndyCar, with the fact that Giorgio Pantano, Jean Alesi and Rubens Barrichello had also competed in the series only last year. But success would not necessarily be guaranteed, even though the last person from our shores apart from Dario and Dan to win the title was Nigel Mansell the year after he secured the Formula One title in 1992.

It would however leave him with no real option to return back to Formula One, whereas DTM still leaves the door open on a more positive note. Di Resta has also stated that he would not consider a third driver role within F1, as he has been quoted that it would be considered as a “backward step" to do so.

It is a case that racing is still a business and continues that trend in such a fashion in Formula One, it means that teams will also have to factor in survival means to ensure their competitiveness, no matter their place in the current sporting hierarchy.

It is a far cry from a couple of decades ago, where drivers were dropped into the deep end on the sheer premise of merit, but things have really changes since then, especially when teams have to spend a lot of money to stay racing nowadays, especially in this harsh economic climate.

Is the writing on the wall for di Resta? It will be a case of finding out sooner rather than later, but it could be the curtain call that he would have preferred not to have seen after a season where he was clearly the better driver throughout the year at Force India, who will more than likely announce their driver line-up were soon. The Checkered Flag