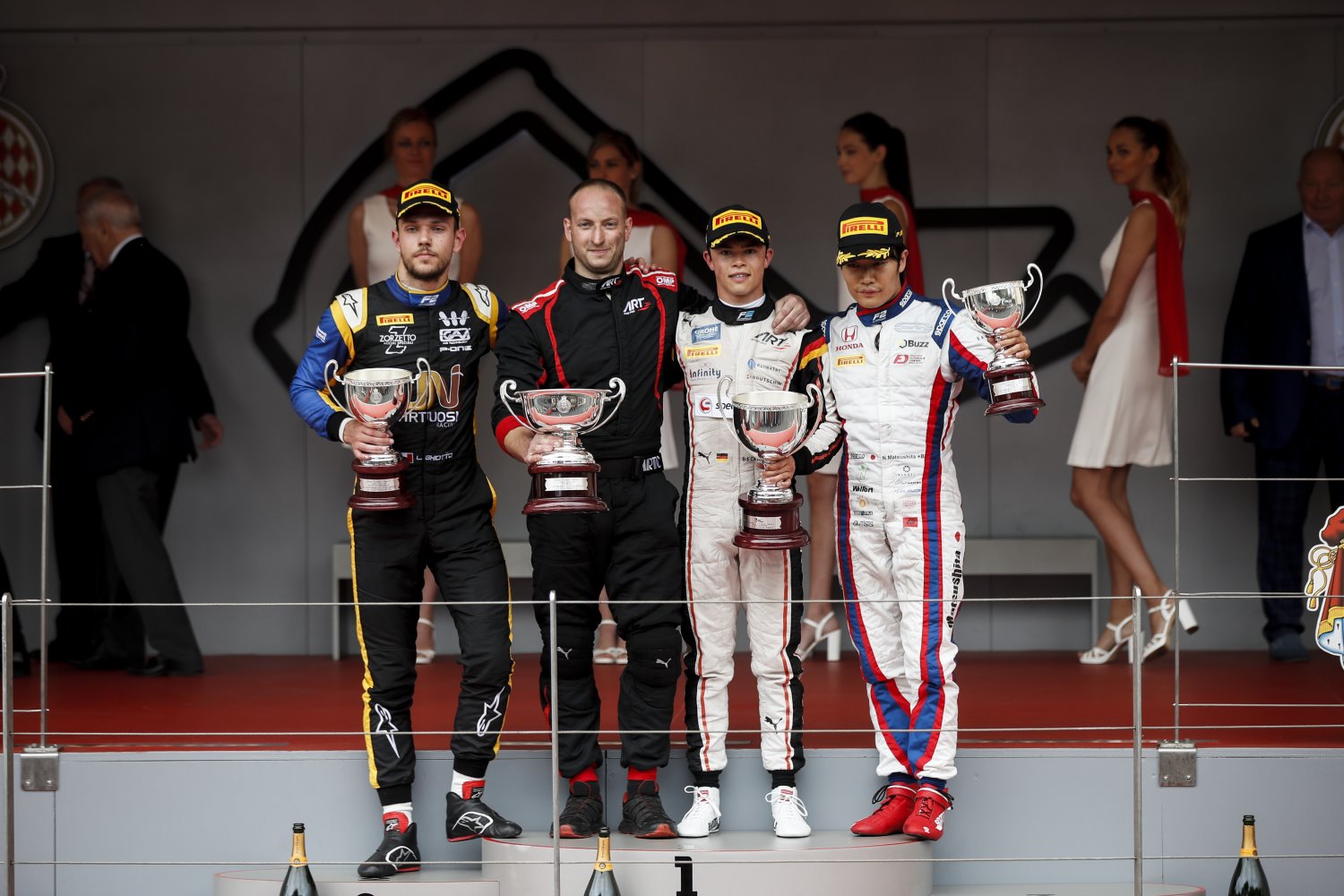 There was no nip and tuck about Nyck De Vries’ victory in Monaco: the Dutch dynamo produced a flawless display to claim back-to-back FIA Formula 2 wins. The ART man led Luca Ghiotto from lights-to-flag, whilst Carlin’s Nobuharu Matsushita took third.

Callum Ilott suffered heartbreak after the formation lap: the Briton who was starting from P2 signaled an issue on the grid, which caused an aborted race start. He would later retire from the pits.

Polesitter De Vries appeared to be in an entirely different race when the lights went out: the Dutchman was unopposed off the line without anyone in P2 and quickly collected a comfortable lead. Ilott’s retirement also left Mick Schumacher with a clear run when the lights went out, but a poor getaway from the German allowed Anthoine Hubert to lunge ahead.

After his disappointing beginning, Schumacher would use the power of his PREMA to good effect and quickly reassumed his position in fourth thanks to a daring move on Hubert. On the option/prime strategy, the German was amongst the first drivers to switch to Soft compounds and would head the cars on the same strategy.

At the front, Ghiotto set the fastest lap in his pursuit of De Vries, but to little effect as the race leader was still able to build a 3s gap to the Italian who also had to check his mirrors as Sergio Sette Camara remained close.

De Vries’ race lead looked all the more lucrative given his Championship rival’s woes further back: Nicholas Latifi tried to make a move on Schumacher but made the jump too soon and attempted a tight move on the hairpin which resulted in a battered front wing, having found no room on the inside. This forced the Canadian into the pits and he re-joined in lowly 15th.

Trying to stay ahead of Louis Deletraz who was on the same strategy as him, Schumacher was desperate to overtake Tatiana Calderon (on the prime/option strategy). The German attempted to squeeze between the Colombian and the barrier at La Rascasse, but the room wasn’t there and he caught her tire and spun the BWT Arden car. Deletraz had nowhere to go and came to a halt behind and the trio blocked the track, bringing out a red flag.

The cars were pushed back into the pits ahead of the race restart, which derailed De Vries’ dominance at the front. The Dutchman had built up a 6s lead over Ghiotto, but this was shattered and he would need to do it all over again. They both switched to new soft tires in the pitlane, before De Vries who made light work of the restart and moseyed off back out in-front.

Latifi began making inroads in his search for a points finish. However, his progress was short-lived – his move on Sean Gelael for P10 at La Rascasse came too early and he collected the rear of the PREMA which sent him into the wall, allowing Hubert to dive past them both. The Canadian was handed a drive-through penalty and Gelael forced into a front-wing change.

Ghiotto was the first of the front three to dive into the pits and returned in third place. De Vries and Sette Camara followed on the next lap. The Dutchman re-joined ahead of Ghiotto whilst the Brazilian slotted in just ahead of Matsushita who had pitted one lap earlier. On warmer tires, the Japanese passed the DAMS car at Turn 5, claiming third place along the way.

With just five laps to go, drama returned to the streets of Monaco: Mahaveer Raghunathan appeared to hit the brakes late and jerked the back of Jack Aitken, which shunted his Campos into the barrier. Simultaneously, Juan Manuel Correa lost control and smashed into the wall at the swimming pool. The Safety Car came out bunching the cars at the front.

At the restart with only one lap to go, De Vries would not be denied what felt rightfully his: he remained calm and collected to stay ahead of the pack and take the checkered flag first. Ghiotto settled for second as Matsushita returned to the podium with third place. Sette Camara finished fourth ahead of Dorian Boccolacci, Guanyu Zhou, Artem Markelov, Deletraz, Hubert and Ralph Boschung.

Starting from reverse grid pole, Deletraz will hope to be the second Carlin of the weekend to enjoy the podium, when racing resumes at 5.15pm local time.