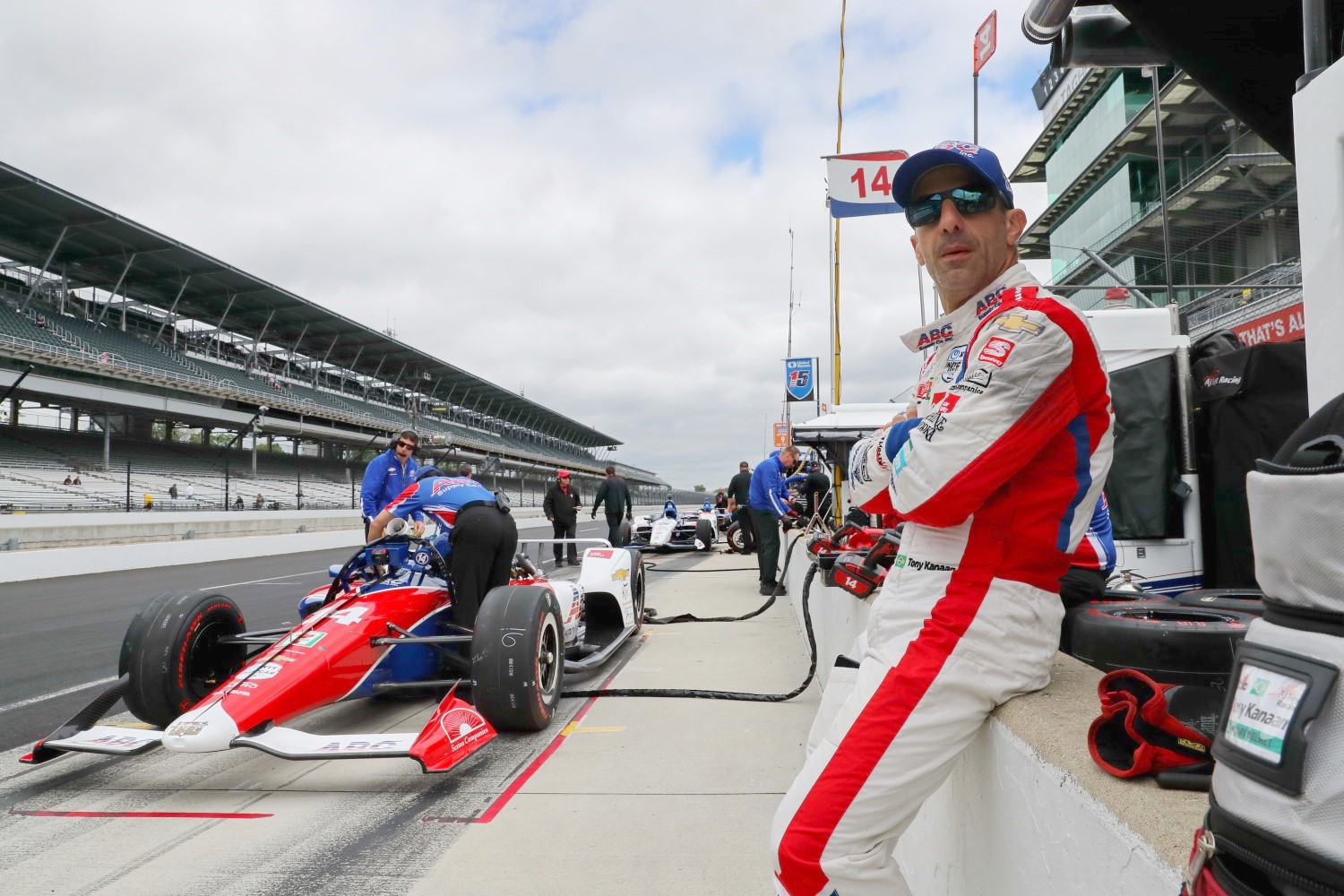 THE MODERATOR: We have an old friend in the media center, driver of the No. 14 ABC Supply Chevrolet of AJ Foyt Racing, our good friend 2013 Indianapolis 500 champion Tony Kanaan. Good to see you up here, although today is not about necessarily outright speed, but you did have speed, or at least you've got one of the six times in the 2:25 bracket.

TONY KANAAN: Yeah, a good day for us. Obviously, conditions look like pretty similar to what we're going to see on Sunday hopefully, so you know, it was a pretty easy day for us. I wasn't really happy with my car on Monday, and I was extremely vocal about it, and I think my engineers heard me, so we made it better today.

THE MODERATOR: What were the things you're looking for today? What are the objectives?

TONY KANAAN: Well, today, now you know where you're starting, so I was really working on my car, the level of downforce and grip that I wanted to have starting 16th. So really we worked in traffic a lot and trying to find the grip and scan to some of the items that we had on the list to be able to — once we put ourselves in the front during the race, to know what to do.

Q. Is there a sense that almost the entire field has a shot on Sunday?
TONY KANAAN: It's the most competitive field I've ever seen in my 18 years here. Qualifying was extremely hard, and it's really tight. So yeah, I think it's going to be a difficult race. I do strongly believe that everybody, every single guy is starting this race, and girl, they think they can win this race, which is true.

Q. A very strong Carb Day similar to last year when you were strong. What is the best thing you can take from last year's race into this in order to improve the results?
TONY KANAAN: I just think I was looking on Monday when I drove the car, I was looking for the same car I had last year, which I didn't have. I think we do now, so pretty much it's to have a consistent car in traffic, and be able to stay behind people and be able to just — to pass some cars and stay up front all day. That's what we're working on.

Q. You said obviously you've been here for 18 years and the field is extremely competitive this year. How much does your experience here count for that on Sunday when it comes to the race?
TONY KANAAN: Well, it helps. It definitely helps. I've known the scenarios. I've known how to be patient and not to get desperate if you're 10th halfway through the race and you think, oh, I'm not going to win this race. This race really is going to start shaping up on the last pit stop, so let's say last 35, 30 laps to go. So for me, the experience, it only helps me to keep understanding what's going on with my car, so when I make that last stop, I will make the right decision on wings and stuff that we can choose so I'll be in a position to win the race.

Q. A few years ago, I apologize for attributing this to your good buddy, Dario, but you corrected me, you said, you don't pick the 500 to win. Tell me what you said.
TONY KANAAN: I said the track picks the winner, and I still believe that. Hopefully, she'll pick me again.

Q. I'm wondering what kind of race do you think we're going to see in terms of passing relative to last year?
TONY KANAAN: I think we'll see more passes than last year. I believe in the beginning you're probably — you guys are probably going to think that there are not going to be enough just everybody is judging each other. Really it's — the way that we're running so close, there is no way you want to lead because you don't want to burn fuel. And when that happens, it's just like it's a pain because nobody wants to pass anybody, you just — it's a waiting game. It's kind of like — it's actually some sort of annoying because you're just there, you're like, I know I can pass him but I don't want to do this, and you'll see it will start to shape up. I think the guys in front will be smart enough not to get in between themselves so you can open a gap, because again, with the fuel being so close, if you open a little bit of a gap, that gap that you open between let's say the top 5 to the guys behind, you won't be able to catch it. So you'll see a lot of people working together.

I think there will be more passing than last year. The tires are better. We have more downforce. So I believe it will be a better race.

Q. My question is related to what you said recently. After your 18 years of experience here, running here, do you think is it possible on Sunday to make some quick moving through the field with this type of competition this year?
TONY KANAAN: We'll try. I mean, I think, like I said, it's going to be a patience game. Obviously starts and restarts, probably going to get trickier because everybody is going to try to move to the front. But I believe that — you'll be surprised how many good guys are in the back there. Just look at my row. It's myself, Graham and Dixon, and we're in the middle of the pack, and I don't think we're going to say there long.

Q. Yesterday you told me about knowing exactly what your race was. Today you finished with a very good time, and now it's more about you want it to happen now Sunday, or you wait and build more confidence and thinking more on strategic things?
TONY KANAAN: Well, you've got to think about everything. I'm happier with the car, but that doesn't mean anything. We still have 16 guys, 15 guys in front of me, but I am happier than I was a couple days ago. And then I think, again, I still believe the race is going to be tight. So it's going to be just — you know, it will be a no-mistake race, but not just us. Pit crew, you can lose a lot on the pit stops. There's going to be between six and eight pit stops. So we'll see.

Q. The changes to the car physically, the changes they made this year, will it make it a better race because there was concern it wasn't all that great last year. Do you think the car is racier?
TONY KANAAN: Yeah, we have more front grip from the tires and more downforce, so I believe so, yeah.