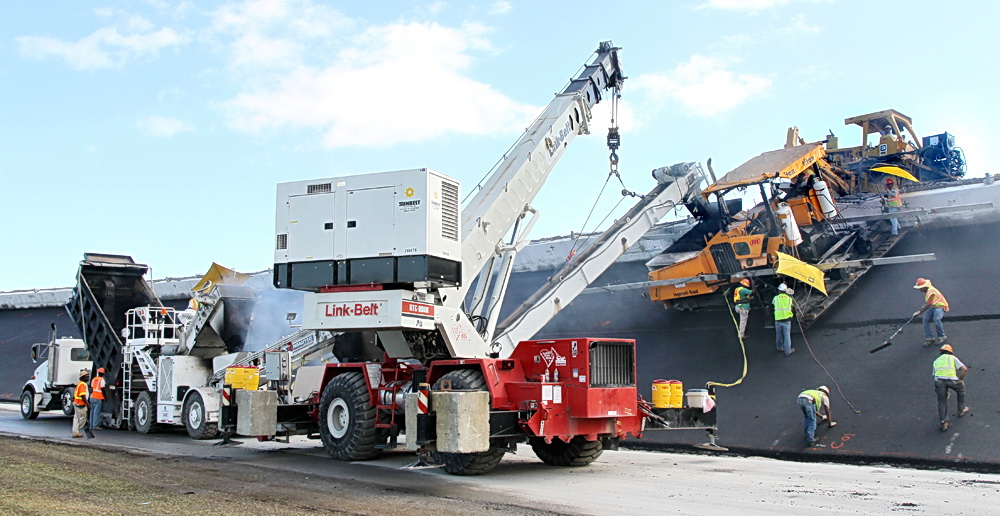 One of the most stress-inducing undertakings in racing is a track repaving project.

If you do it right, it can really cause your stock to rise with fans and drivers alike. But if you happen to get it wrong, you can literally turn a time-honored tradition upside down. And as we all know, in racing, upside down is bad.

So surely everyone, from NASCAR and track officials to competitors and fans, has been obsessively muttering, “Please don’t mess it up; please don’t mess it up," as the sport’s most famous venue, Daytona International Speedway, underwent a massive repaving project during the latter months of 2010. The project began on July 5, immediately following the Coke Zero 400 weekend, and concluded on Dec. 10, as an actual checkered flag waved over the departure of the Lane Construction paving crew.

Repaving projects are tricky. Just like people, racetracks develop individual and unique personalities as they mature. Stripping a track back down to its bare dirt would be comparable to being stripped of your skin and being reconstructed from the skeleton outward. Your basic bone structure would be the same, but chances are good that the end result could look very different than the original. When dealing with Daytona, NASCAR’s most iconic track, this would be simply unacceptable.

DIS needed some sprucing up, to put it mildly. The World Center of Racing was last paved in 1978. To get some perspective, that was before NASCAR Sprint Cup Series superstars Kyle Busch, Denny Hamlin, Carl Edwards, Brian Vickers and Kasey Kahne (to name a few) were even born.

The impetus for the project, which had been scheduled for 2012, was a pothole between Turns 1 and 2, which caused a delay of over two hours during the 2010 Daytona 500, the biggest, most highly-publicized race of the year.

Although Robin Braig, president of the speedway when the repaving work began, said," We don't want to paint the whole house when all we have to do is a little touch up," this turned out to be much more than a mere makeover. Temporary cosmetic work would not suffice. Nothing less than a complete facelift would restore the track’s smooth complexion, which had become pitted and rough after years of hard racing.

How do you go about reconstructing a legend? With precision, respect and a whole lot of asphalt. According to information released by the track, the five-month paving project, which in addition to the racing surface included pit road, the apron and the skid pads, required 50,000 tons of asphalt. Fifty truckloads of concrete were poured for the new pit stalls. All in all, over 1.4 million square feet of paving was completed.

The time had come at last to check the results, so Goodyear scheduled a tire test, which was held on Dec. 15 and 16.

How important is Daytona International Speedway to NASCAR?

Let me put it to you this way. Generally, when Goodyear visits a track to conduct a pre-event tire test, the company invites one team from the each of the four auto manufacturers – Chevy, Ford, Dodge and Toyota — to participate. Information is collected from each of the four and taken back to the plant where a specific tire compound is created for each individual track.

Individually and collectively, they drove high and low, fast and slow on the smooth new surface. Then, as drivers are wont to do, they said exactly what they thought about it.

“It’s a new attitude," said 2004 NASCAR Sprint Cup Series champion Kurt Busch. “You look at it and you smile, going, ‘Hey, they did the best job they could, we got the best product out there, now let's go and race …’ Looks like it got a great facelift."

“I think they did a lot like what happened at Darlington. When they redid Darlington, they kept Darlington. They kept it wide, didn't change the transitions. They kept the character of the racetrack," said Richard Childress Racing driver Jeff Burton. “I think the same thing happened here. It's much smoother, has a tremendous amount more grip, but it's still Daytona. They didn't try to change the banking from the bottom to the top, do all that stuff. They just kept Daytona and put pavement on it. I'm glad that's what they did.

“Daytona … has its own history, its own heritage. It's entrenched in what our sport is all about. So keeping Daytona Daytona was a hundred percent the right thing to do."

The 2000 Cup Series champ Bobby Labonte and defending Daytona 500 winner Jamie McMurray concurred with their fellow drivers, all of whom predicted close, competitive racing come February. “It's going to be a lot tighter packs … around Daytona than I've ever seen. So it's going to be more Talladega-type, really close restrictor plate racing," McMurray said.

The high line is often popular at Daytona, but on Dec. 15 and 16, only the bottom line really mattered, and the tire test told the tale. The verdict?

They didn’t mess it up.