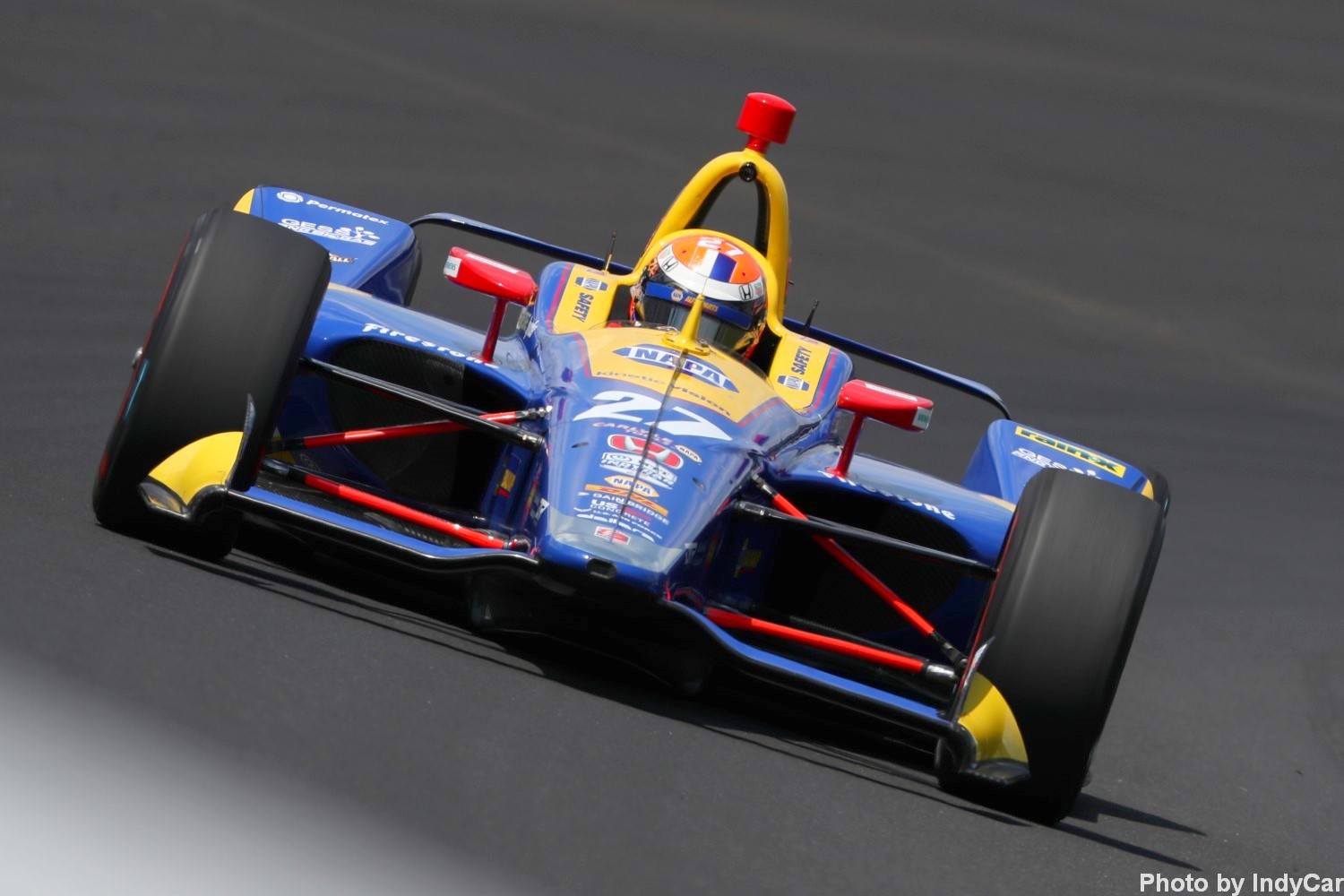 Josef Newgarden turned the fastest lap in his #2 Penske Chevy on Wednesday at 228.865mph, but that speed was set with a big tow and is not indicative of real speed. #9 Scott Dixon was 2nd quick and close behind at 228.835mph. It's nice to get all the glory, but you won't be qualifying this weekend with a tow.

However, the real fastest man on Wednesday was Alexander Rossi. He turned zero laps with a tow, so in the first table he was a lowly 34th quick, but in the 2nd table below, the no-tow speed table, he was fastest on the day at 224.648mph in his #98 Andretti Honda.

How confident is Rossi? He ran very few laps all day, turned the fastest lap and then parked it and told the team don't touch anything.

Fernando Alonso, Felix Rosenqvist and their respective crews have work to do after separate incidents Tuesday at Indianapolis Motor Speedway.

"I think we need to be a bit better in traffic," said Newgarden, the 2017 series champion. "Still trying to figure out exactly what we need on the race car, that was kind of our focus today. We didn't really do much qualifying sims or anything like that.

"I think the Shell car feels OK. It's not a bad start. I'm trying to stay careful with it. I always try and respect this place at the beginning. I never try and push until it's time."

Scott Dixon, last year's series champion who trails Newgarden by six points heading into the Indy 500 on May 26, was second on the speed chart at 228.835 mph in the No. 9 PNC Bank Chip Ganassi Racing Honda.

Rossi logged the best lap without the tow of a leading car, at 224.648 mph in the No. 27 NAPA AUTO PARTS Honda for Andretti Autosport. The 2016 Indianapolis 500 winner said the speed was "irrelevant" this early in the week, but he was pleased his team worked through its practice checklist efficiently enough that he was able to sit out the closing hours of the afternoon.

"It was a good day," Rossi said. "Any day out here is a good day, for sure. Just running through a checklist of things to try and understand everything that we learned over the offseason and applying it to kind of all five (Andretti Autosport) cars in different ways and compiling as much information as we can.

"That's the advantage about being on a big team for this event. When you have this much practice, you can really kind of divide and conquer, and I think we're doing that well so far."

At the other end of the spectrum, Alonso and Rosenqvist were uninjured but had their days end abruptly in single-car crashes. Alonso's No. 66 McLaren Racing Chevrolet made contact with the Turn 3 SAFER Barrier some 95 minutes into the seven-hour practice. His car slid into the inside barrier on the short chute and then up the track to the outside barrier in Turn 4 before coming to rest.

Alonso exited the car without assistance but disappointed. The McLaren crew spent the afternoon preparing Alonso's backup car for practice on Thursday.

"It was understeer on the car, and even if I lifted the throttle on the entry of the corner, it was not enough, and I lost completely the front aero," said Alonso, the two-time Formula 1 champion and 2017 Indy 500 rookie of the year. "The wall came too close and too quickly. Unfortunately, it happened today.

With just less than an hour remaining in practice, Rosenqvist made hard contact with the SAFER Barrier exiting Turn 2 in the No. 10 NTT DATA Chip Ganassi Racing Honda. Rosenqvist was also uninjured and team officials said he will move to a backup car as well.

"I was behind Colton (Herta) and just trying to run the car in traffic, and I just felt a very sudden change of having a bit of push, and it went very loose, very fast," Rosenqvist said. "I couldn't react to it.