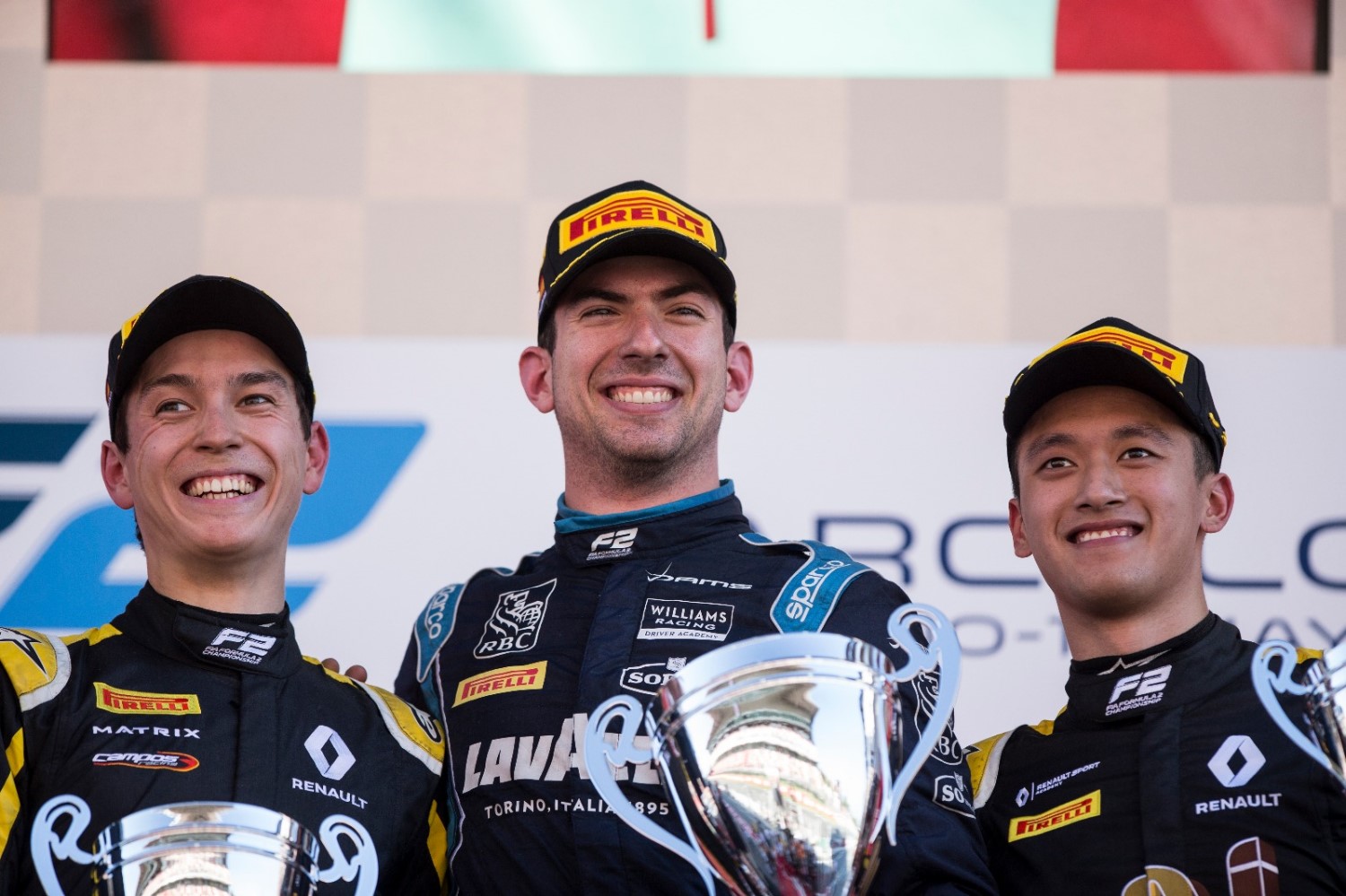 Nicholas Latifi finished first and gained further ground on his Championship rivals as a carefully plotted attack came to fruition in the final laps of the FIA Formula 2 Feature Race in Barcelona, Spain. The DAMS driver saved his rubber to steal a potential win from the clutches of UNI-Virtuosi rookie Guanyu Zhou at the end, who finished in third behind Campos Racing’s Jack Aitken, who also passed him late on.

Zhou’s teammate Luca Ghiotto had dominated the weekend up until the race but was forced to claw his way to fourth place from last with a momentous drive, following a sorry start to a race that he had begun on pole position.

The Italian made a poor getaway from P1 and was instantly overtaken by his teammate after the lights went out. The Chinese driver flew through the middle of the front row, overtaking both Ghiotto and Latifi on his way to the race lead.

Ghiotto lost another position to Nyck De Vries and his afternoon was worsened by the side of Dorian Boccolacci’s Campos when the Frenchman made an attempt down the inside of those behind the Italian driver, but instead collided with the front-wing of the Ghiotto’s car. This forced the UNI-Virtuosi man back to the pits and saw him plummet to last.

The safety car had clocked up significant mileage last time out in Baku, but would enjoy it’s only outing early on in the race when Giuliano Alesi spun off track and beached himself on the gravel. Zhou held his nerve at the restart and retained the lead, albeit with a slender gap of just 0.7s.

With the majority of the drivers heading into the pits for Prime tires, Jordan King was on an alternate strategy and took advantage of an emptying track to slide past Sean Gelael for P4, while Ralph Boschung was handed the lead as Jack Aitken pitted to take on the soft tire.

After their mandatory pit stop, Zhou, Latifi and De Vries were beginning to close in on the top six, who were all on the alternate strategy and yet to change. Mahaveer Raghunathan was first to make way as Zhou eased passed the MP Motorsport rookie down the main straight, with Latifi following suit a lap later.

Further up the field, Anthoine Hubert – on the Prime/Option strategy – was closing in on Boschung in the chase for P1 and would eventually blister past the Trident man down the lengthy main straight. King would claim second a lap later with a near identical move on the Swiss driver.

While Zhou was being forced to fight off the experience of Latifi in behind, his teammate was laying the groundwork for a points finish, having already risen to 11th, while also setting the fastest lap so far.

Latifi had already eyed up a move on the Chinese driver in third, with Hubert and King still yet to pit, before the DAMS racer was told over team radio that he would be fighting with Zhou for the win. With this, the battle intensified and he took a tow from the Renault driver before sling-shotting around him down the main straight.

With this, Hubert and King finally pitted, awarding Latifi the race lead for the first time, and immediately started to build a gap between himself and Zhou, who was then under siege from Aitken. The British driver failed to take the rookie at the first attempt, but would make his move stick on the next lap of the course to seal P2.

While one UNI-Virtuosi machine had lost a positon, the other was fast gaining and Ghiotto had somehow made it up to fourth place from last, despite having to pit twice. It would finish like this, with Latifi sealing victory, followed by early-season Championship rival Aitken. Zhou would complete the podium, in-front of Ghiotto, De Vries, Hubert and King who started from P15 and P16 respectively while Callum Ilott secured reverse grid pole and his first points of the season in eighth place. Gelael and Boschung pocketed the remaining available points with ninth and tenth.

Ilott will look to make a statement of his own in tomorrow’s Sprint Race, while Aitken and Ghiotto will endeavor to close the gap between themselves and Latifi, when the sprint race begins tomorrow at 11.30am local time.