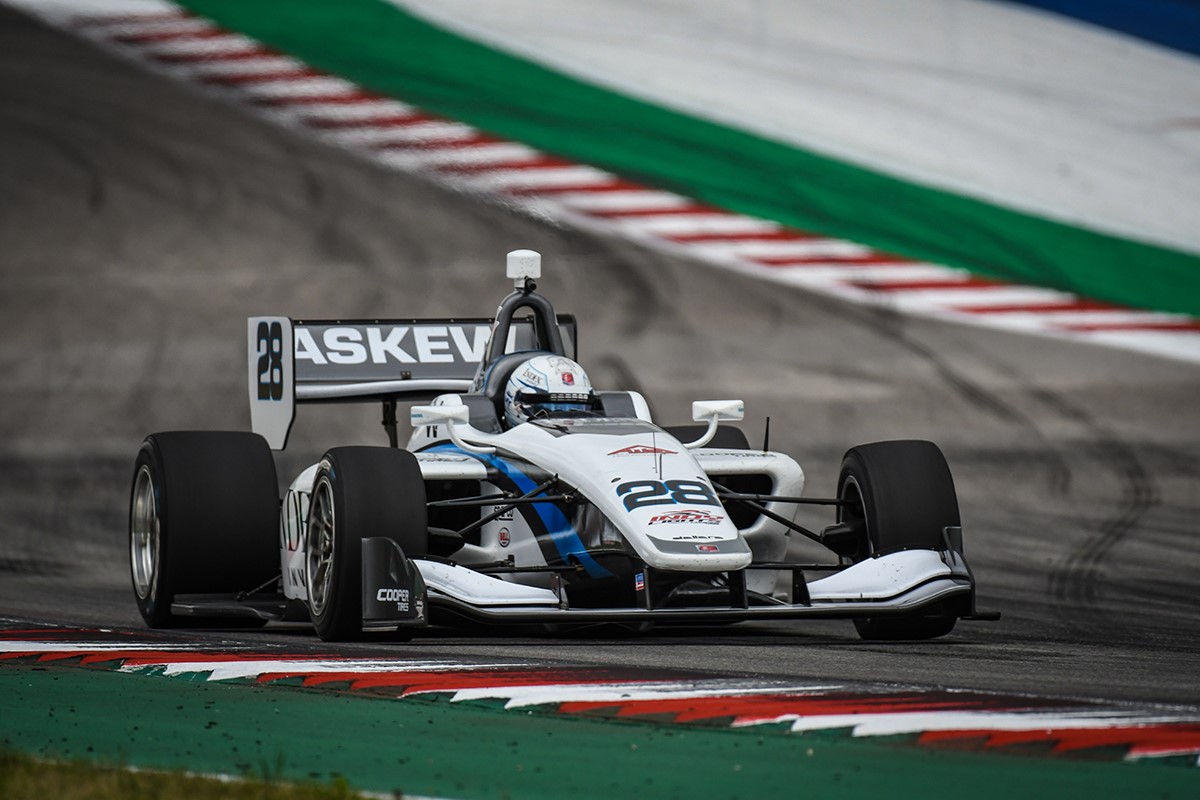 The month of May is traditionally the yearly highlight for any open-wheel racer in North America. This year it will culminate in the 103rd Running of the Indianapolis 500 on Memorial Day weekend, but official activities at the famed Indianapolis Motor Speedway will commence this week, May 9-11, as the 2.439-mile road course plays host to the sixth annual Grand Prix of Indianapolis.

The Road to Indy is unique in the high-pressure world of auto racing, offering scholarships and opportunities valued at over $2.5 million for drivers to progress all the way from the grassroots to the pinnacle of the sport.

Florida’s Askew on a Roll in Indy Lights
The Indy Lights Grand Prix of Indianapolis will comprise rounds five and six of the 18-race season, with Andretti Autosport rookie Oliver Askew, from Jupiter, Fla., seeking to reprise the form that saw him sweep the weekend at Circuit of The Americas, near Austin, Texas, in March. Askew thereby leads the chase for a scholarship to ensure entry into at least three IndyCar races in 2020, including the 104th Indianapolis 500.

Askew, 22, has only been racing cars for two seasons following a stellar career in karting but is already the track record holder at Indianapolis in both USF2000 and Indy Pro 2000. He won two races at Indy from the pole on his way to the USF2000 championship crown in 2017, and last year was fastest in qualifying for both Indy Pro races. Askew also set the pace on Day Two of the end-of-season Chris Griffis Memorial Road to Indy Test last fall – his very first experience in a 450-horsepower Dallara-AER IL-15 – and this week will attempt to go for the trifecta.

VeeKay shared the victory spoils in Florida with Canada’s Zachary Claman, who added a second-place finish in Race Two for Belardi Auto Racing to claim the early points lead. The Montreal, Que., native will be looking to bounce back from a disappointing weekend in Texas, where he managed no better than seventh from the pair of road course events.

Askew also will be looking over his shoulder at Andretti Autosport teammates Ryan Norman, who has endured a disappointing start to his third season of Indy Lights after beginning as a firm title favorite, and Robert Megennis. Norman, from Aurora, Ohio, was the only driver to (narrowly) out-pace Askew at the Road to Indy test last September, while rookie Megennis, from New York, N.Y., twice finished on the podium in Texas and led the opening five laps of Race Two before losing out to Askew.

Toby Sowery, from Cambridge, England, made a stunning Indy Lights debut at St. Petersburg by securing two podium finishes, despite joining BN Racing/Team Pelfrey mere days before the opening weekend of the season. He was out of luck in the next two races in Texas, although BN Racing teammate David Malukas, the youngest driver in the field at age 17, was able to pick up the slack. Malukas, from Chicago, Ill., stormed from 10th on the grid to third in Race Two to back up his pair of solid fourth-place finishes in Florida.

Canadian Dalton Kellett will drive a second Juncos Racing entry, while Brazilian Lucas Kohl will join Claman at Belardi Auto Racing as he continues to find his feet after stepping up from USF2000.

The on-track action will commence with a pair of 50-minute tests on Thursday, May 9, followed by a lone official practice session. Qualifying at 10:10 a.m. EDT on Friday will form the grid for Race One which is set for a green flag at 1:30 p.m. A separate qualifying session at 8:30 a.m. on Saturday will decide the starting order for Race Two at 1:15 p.m., immediately prior to the IndyCar Grand Prix headline event.

In the U.S., both 60-minute races will air live and on demand on NBC Sports Gold with practice and qualifying coverage carried via live streaming on the Road to Indy TV App, RoadToIndy.TV, indylights.com and indycar.com. Internationally, all practice, qualifying and race events will be live streamed on the Road to Indy TV App, RoadToIndy.TV and at indylights.com. Additional coverage can also be found on the Advance Auto Parts INDYCAR Radio Network broadcasts which airs live on network affiliates, Sirius 216, XM 209, indycar.com, indycarradio.com and the INDYCAR Mobile App powered by NTT Data.

Popular Canadian Parker Thompson, 21, from Red Deer, Alb., capitalized on a last-minute deal to join the newly expanded Abel Motorsports team by sweeping the first two races of the new Indy Pro 2000 season. Thompson, who finished second in the championship last year, therefore established an early claim in the quest for a scholarship valued at almost $600,000 to graduate to Indy Lights in 2020. The fact he has won at Indy in both USF2000 (2016) and Indy Pro (2018) will stand him in good stead, too.

Neither Thompson nor rookie teammate Jacob Abel, from Louisville, Ky., have been idle during the hiatus between the opening two weekends of the season. Thompson has finished on the podium in each of his first four sports car races, including a dominating victory in the wet during last weekend’s IMSA Porsche GT3 Cup Challenge USA at Mid-Ohio, while Abel, 18, has taken a slender lead in the F3 Americas Championship powered by Honda following a pair of wins at Road Atlanta.

Thompson’s perfect start to the season has catapulted him into a commanding 19-point advantage over Swedish rookie Rasmus Lindh, who has joined the same Juncos Racing team which guided Rinus VeeKay to the 2018 championship. Lindh led the majority of Race One in St. Petersburg before slipping behind Thompson in the late stages, and added a fourth-place finish on Sunday.

Mexican Moises de la Vara qualified among the top five in both St. Pete races for DEForce Racing, marking himself as a potential front-runner alongside teammate Kory Enders, from Sugar Land, Texas, who looks to rebound from a disappointing first weekend.

Others to watch will include series veteran Nikita Lastochkin (Exclusive Autosport), young Canadian Antonio Serravalle (Pserra Racing/Jay Howard Driver Development) and Phillippe Denes, from Carmel, Calif., who performed well on his debut with FatBoy Racing! In addition, Jacob Loomis, from Corinth, Texas, will make his debut for JDL Racing.

Testing and official practice on Thursday will precede a pair of qualifying sessions on Friday morning which will set the grids for Race One at 3:40 p.m. EDT on Friday and Race Two at 10:10 a.m. on Saturday, May 11.

Braden Eves impressed onlookers with a pair of strong qualifying performances during his USF2000 debut at Portland International Raceway, Ore., last fall, and then even more so when he began the new season with a perfect pair of victories in St. Petersburg. True, one of them was gifted to him when Cape Motorsports teammate Darren Keane made a mistake on the final corner and eliminated both himself and second-place runner Christian Rasmussen (Jay Howard Driver Development), but Eves, from New Albany, Ohio, who turned 20 last week, certainly showed he will be a leading contender for honors as the 2019 season progresses.

Keane, from Boca Raton, Fla., will be anxious to rebound from a desperately disappointing weekend in his home state. Fastest both in preseason testing and in the opening official practice session at St. Pete, Keane was forced to start the first race from the back of the field after his car’s transponder failed during qualifying. He then showed his skills by dodging a variety of incidents to make up 12 positions before the checkered flag fell. He also set the fastest race lap.

Denmark’s Rasmussen, too, will be hoping for rather better fortune following that Race Two incident which had followed a strong run to fourth on Saturday.

Another of the preseason favorites, Alex Baron, from Narbonne, France, similarly struck misfortune in Florida. Baron crashed heavily on the opening lap after qualifying a seventh fastest, but repaid the efforts of his Legacy Autosport team, which completely rebuilt his demolished Tatuus USF-17 overnight, by finishing fourth on Sunday. After winning one of the races at Indy last year, Baron has his eyes set on a repeat performance – or two – this week.

Mazda Road to Indy Scholarship winner Hunter McElrea currently holds second in the point standings after securing a pair of podium finishes for Pabst Racing on his debut. The talented rookie, who carries dual American and New Zealand citizenship yet lives in Gold Coast, Australia, also was fastest during the traditional Chris Griffis Memorial Road to Indy Test at Indianapolis last fall.

Rookie Manuel Sulaiman (DEForce Racing), from Mexico, and Zach Holden, from Greenfield, Ind., also stood out from a stacked field at St. Pete. Sulaiman chased home Eves in the opener, while Holden’s late agreement to join BN Racing brought dividends in the form of a third-place finish in Race Two.

The long list of potential front-runners this week will include the Pabst Racing pair of Colin Kaminsky, from Homer Glen, Ill., and Brazil’s Bruna Tomaselli, the only woman in the field, who scored a pair of top-seven finishes in St. Pete. Then there’s Englishman Matt Round-Garrido (Jay Howard Driver Development) and Australian Cameron Shields (Newman Wachs Racing), plus second-generation racers Jack William Miller, from Carmel, Ind., and Eduardo Barrichello, from Sao Paulo, Brazil, who are teammates at Miller Vinatieri Motorsports.

Remarkably, there will be no fewer than three 14-year-olds among the field. Puerto Rico-based Reece Gold claimed a pair of top-10 finishes for Cape Motorsports in Florida, while California’s Nolan Siegel also made his debut with Newman Wachs Racing. This week they will be joined by long-time karting star Jak Crawford, from Houston, Texas, who was too young to compete at St. Petersburg but has already established his credentials during several impressive weekends with DEForce Racing in the NACAM F4 Championship.

The USF2000 schedule virtually mirrors that of Indy Pro 2000 with testing, practice and qualifying on Thursday and Friday, capped by races at 2:45 p.m. EDT on Friday and 9:15 a.m. on Saturday.