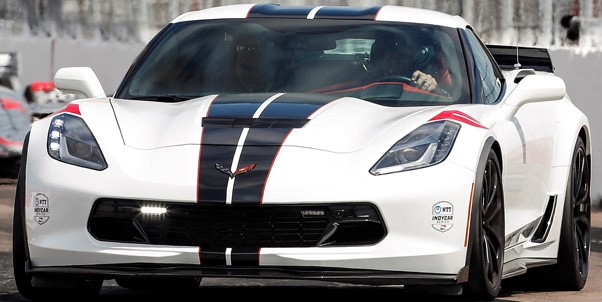 Chicago Blackhawks goaltender and two-time Stanley Cup champion Corey Crawford will lead the field to the green flag for the sixth annual INDYCAR Grand Prix on Saturday, May 11 as the driver of the Chevrolet Corvette Grand Sport Coupe Pace Car at the Indianapolis Motor Speedway.

Twice an NHL All-Star (2015, 2017) and a member of the NHL All-Rookie team in 2011, Crawford is just the eighth Blackhawks goaltender to win more than 100 games in the team's storied history. The Windy City fan favorite is also an avid car enthusiast who enjoys restoring vintage vehicles.

"I'm honored to have been selected to drive this year's Pace Car at a place as famous as the Brickyard," Crawford said. "Indianapolis is an incredibly passionate sports city, and I couldn't be more excited to represent the Blackhawks and see their love for IndyCar racing in person."

Crawford, 34, a native of Montreal, was selected by the Blackhawks in the second round of the 2003 NHL Draft. He lifted the Stanley Cup with his teammates in 2013 and again in 2015.

"It's great to have such a popular athlete with Hoosier sports fans and a dedicated car enthusiast like Corey Crawford lead the INDYCAR Grand Prix field to the green flag in a Corvette," said Michael Stouffer, Chevrolet motorsports marketing manager. "The INDYCAR Grand Prix will be a thrilling race that kicks off an exciting three weekends of action in May at the famed Indianapolis Motor Speedway."

Crawford will lead the starting field of the NTT IndyCar Series race on the 14-turn, 2.439-mile road course at IMS in a Corvette Grand Sport that features:

"Corey is going to have a blast driving this year's Corvette Pace Car, especially since he's such a true fan of cars and racing," IMS President J. Douglas Boles said. "Many Indy residents have long enjoyed cheering for Corey and his teammates, and between today's news and the return of Jim Cornelison to the Indy 500, the Blackhawks are fast becoming the preferred NHL team of IMS."

Chevrolet has a storied history with the Indianapolis Motor Speedway. Chevrolet was founded in 1911, the year of the inaugural Indianapolis 500, and company cofounder Louis Chevrolet, along with brothers Arthur and Gaston, competed in early Indy 500 races. Arthur Chevrolet competed in the 1911 race, and Gaston Chevrolet won it in 1920.

Practice and qualifying for the INDYCAR Grand Prix take place Friday, May 10 at IMS, with the 85-lap race starting at 3:30 p.m. (ET) Saturday, May 11.

Visit IMS.com to purchase tickets for the sixth annual INDYCAR Grand Prix on Saturday, May 11 and the 103rd Indianapolis 500 presented by Gainbridge on Sunday, May 26, and for more information on the complete Month or May schedule at IMS.