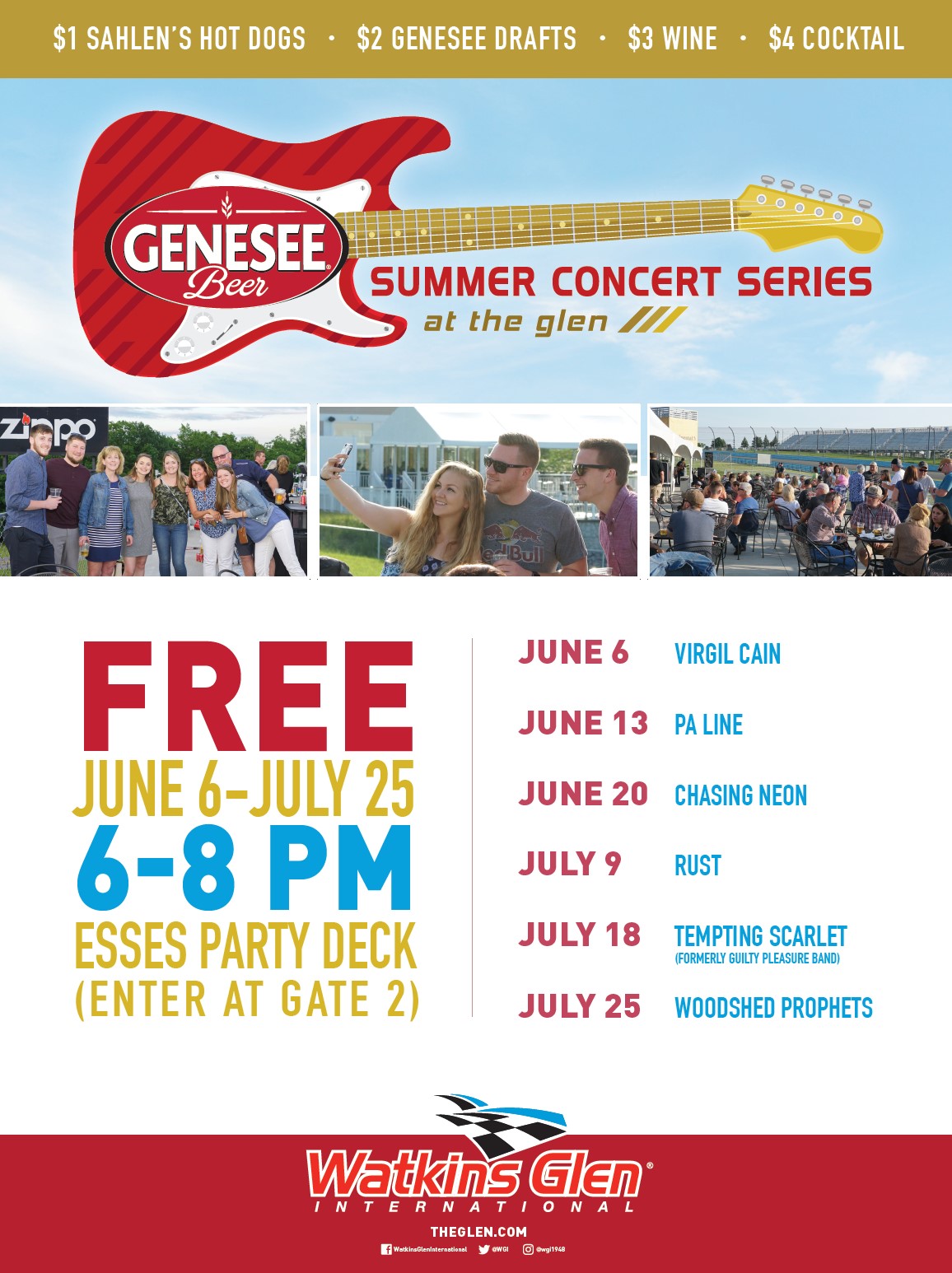 This summer, Watkins Glen International and Genesee Brewing Company will host the Genesee Summer Concert Series at The Glen, a free six-event concert series at the track, providing fans an opportunity to listen to local bands and learn more about the upcoming events for the 2019 season.

“We are excited to not only bring back our summer concert series, but kick off our relationship with Genesee Brewing Company in a unique way," Watkins Glen International President Michael Printup said. “This is a great chance to showcase what WGI has to offer beyond racing and provide the fans with more summer entertainment."

Free and open to the public from 6-8 p.m., the first of the six happy hour-style events will take place Thursday, June 6 featuring Virgil Cain at the Esses Party Deck and continue through July 25. Fans can enjoy $1 Sahlen’s hot dogs, $2 Genesee drafts, $3 wine and $4 cocktails. Genesee Beer and Light will be featured at each concert on draft as well as the brewery’s most award-winning beer: The Original Cream Ale, available in cans.

“Watkins Glen International is home to some of our most loyal Genesee fans. It’s about time we celebrate them in the best way we know how: heading to the track to kick back, enjoy a show and drink great beer," said Janine Schoos, associate brand director for Genesee Beer. “We’re really happy to be cohosting this awesome summer series as a part of our partnership with The Glen."

The complete schedule is listed below, with more details to come.

A fan favorite, Virgil Cain and his solo show developed with influences from Billy Joel and Elton John on piano to Paul Simon and Dave Matthews on guitar. With a passion for evolving a show, he discovered new technologies including digital looping and sequencing.

Original music inspired by Grass Roots, infused with Soul, and born from the Indie scene, PA Line is Peace Always. The Buffalo-based band are winners of Best Alternative Band and Best Indie/Folk Band at the 2016 All Western New York Music Awards. Chasing Neon, the Groton, NY based band brings mixes of classic rock and country to their performances.

RUST is a classic rock cover band from the Southern Tier of New York State. Consisting of veteran, professional players that have been a part of the areas’ music scene since the 1970s, RUST has spent the past several years refining their sound to become the premier classic rock band. Tempting Scarlet, formerly Guilty Pleasure Band, returns to The Glen with their hard rock and pop rock sound that they bring throughout the Southern Tier.

The Woodshed Prophets out of Sidney, NY, are a quartet of bearded wild-men, hellbent on world-domination or self-destruction. The Prophets primarily play original material that is a unique blend of rock & country, what some people have coined as "Power Twang".

Located within five (5) hours (~300 miles) of 25% of the US population, Watkins Glen International is the premier road racing facility in North America, three-times voted “Best NASCAR Track" by readers of USA Today. Keep up with The Glen on Facebook and Twitter. For tickets, camping, and additional information, call 1-866-461-RACE or visit www.theglen.com.