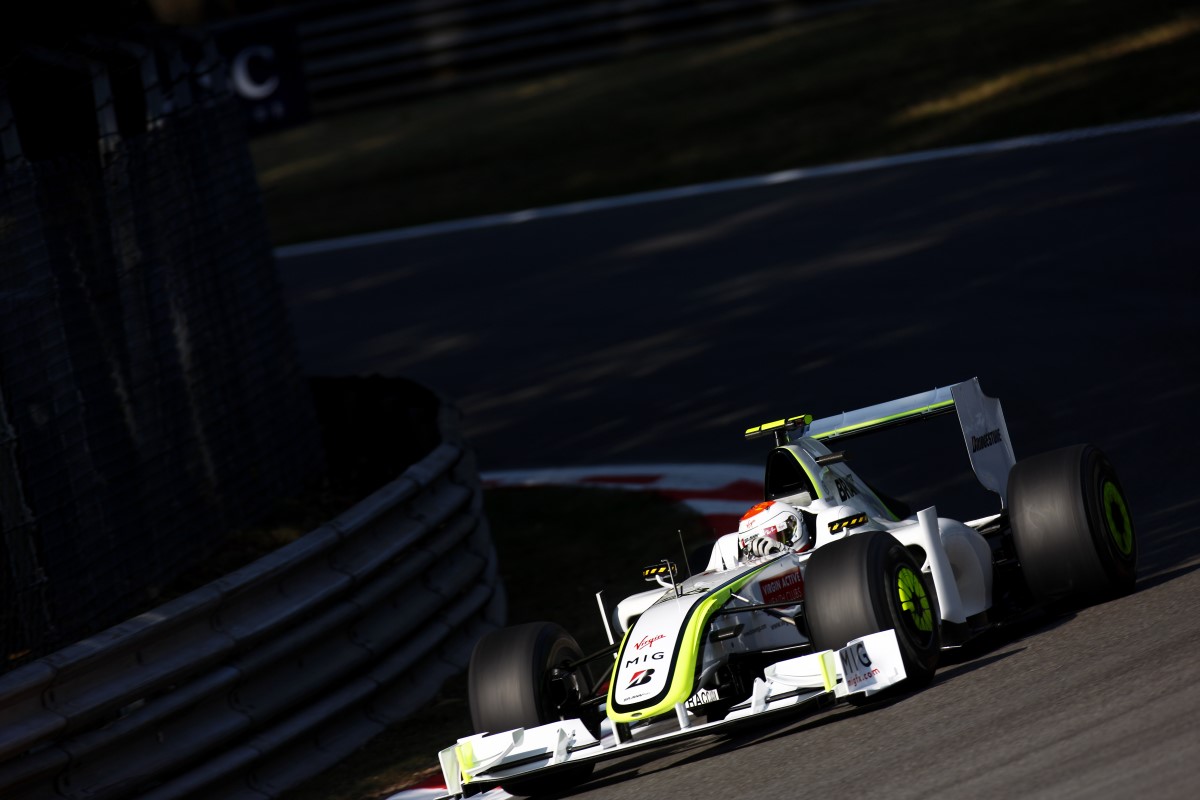 Using a 1-stop strategy to their advantage, Rubens Barrichello and Jenson Button finished 1-2 in the Italian GP F1 race at Monza Sunday for a Brawn GP 1-2.

Ferrari's Kimi Raikkonen gave the tifosi something to cheer about by bringing his Ferrari home 3rd for the final podium position after Lewis Hamilton performed the ultimate choke while running 3rd by crashing out on the next to last lap in his McLaren.

The last lap of the race was run behind the safety car caused by the full course caution as a result of the Hamilton crash debris field in the Lesmos turn.

Adrian Sutil was 4th for another excellent Force India result that saw him also set fastest lap of the race.

The 2009 championship has become effectively a race between teammates, after the Brawns finished one-two at Monza and their title rivals at Red Bull had a poor Italian grand prix.

"The man sat next to me here is obviously my big rival for the title now," said second placed Jenson Button, referring to his lead over winner Rubens Barrichello that shrank by 2 points to 14 on Sunday.

The German's points gap to drivers' title leader Button, however, blew out to 26 points, meaning he needs to score an unlikely 7 points more than his British rival at each of the remaining four races to be champion.

Ross Brawn suggested F1 must now look within his Brackley based team to find the winner of the 2009 championship.

"All I ask from my drivers now is they compete fairly and openly, they have got to work together fairly, but they're old enough to deal with it," he smiled.

Lewis Hamilton admitted he made a mistake after crashing heavily out of a sure podium place on the last lap of Sunday's Italian grand prix.

The reigning world champion had just set the fastest first sector of the entire race in pursuit of Brawn's Jenson Button, but lost the rear of his McLaren on the exit of the first Lesmo curve.

"We didn't have the pace so I was pushing every lap like it was qualifying. The car was still good today, just not good enough. I can only apologize to my team and all my fans," the Briton told the BBC.

His team boss Martin Whitmarsh admitted disappointment with the loss of the podium, and even a hint of regret at not advising Hamilton to secure the result.

But he also said of the 24-year-old: "You can criticize us or him but we are a racing team and he is a great racing driver. He was pushing to the end — that's how he is."

Stefano Domenicali commented afterward on the Italian grand prix where his driver Kimi Raikkonen is once again on the podium.

"It's not as easy as you think to get in a car and drive straight away, so Fisichella needs to work with the engineers. 4 races to go, we need to maximize things to secure third in the Constructors. It was not perfect, today we were not quick enough, Kimi did a great race, the maximum we could have done, we were lucky at the end of the day, I can't imagine how McLaren must feel. We lose time in the last sector, we didn't have the speed.

"We need to understand engine and gear ratios. Kimi is doing well, he's working very hard, since summer he's always been on the podium, he knows we need that to get third in the Constructors championship. The pitstop went well, in the release phase, Kimi tried a quick jump and it was very close to a problem, but luckily we managed it, and luckily Force India had a problem too!

"About 3 cars, if you are able to provide three cars with good names, we would all benefit from that. I know Max doesn't think it's a good choice, but we need to develop it and think about it. Massa is very good and progressing, he's stable and working step by step. I want to congratulate the Brawns, they did a fantastic race today."