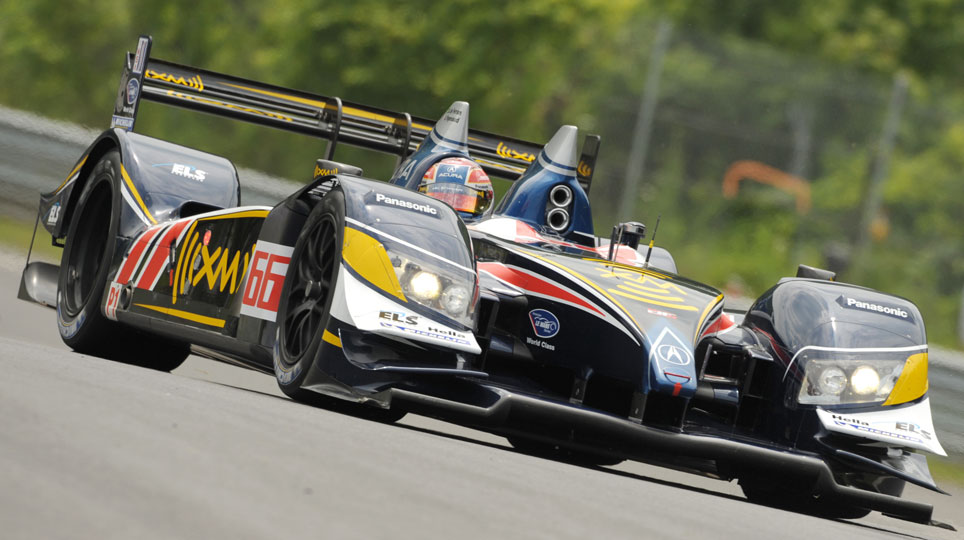 The start of the American Le Mans Series’ second half has an uncanny similarity to the way the first ended…with Simon Pagenaud on pole position. The young Frenchman won his second straight pole position in the Series and third of the season for de Ferran Motorsports and Acura with a record qualifying run for the American Le Mans Northeast Grand Prix at Lime Rock Park on Friday.

“Today was a good day for me," said Pagenaud, who just lost out to Brabham in Lime Rock qualifying last year. “In the first few laps I was trying to get good heat in the tires. I was concerned with the red flag but once it went green, I went out there and it was a good lap."

Pagenaud and teammate and team owner de Ferran have won the last two rounds on two different types of tracks – the short and narrow streets of Long Beach and the wide-open spaces at Utah. So it’s obvious that they feel comfortable no matter the layout.

That may be bad news for the rest of the field, even Brabham and the rest of PatrÂ¢n Highcroft Racing. Brabham and Scott Sharp were overall winners here last year, the first overall win for Danbury, Conn.-based team and also for Acura.

Usually drivers will say that starting out front isn’t a particularly huge advantage. But given the tight and twisty nature of the Lime Rock layout, Pagenaud said being out front means a better chance of staying out of trouble.

“There will be major issues with the traffic in the race," he said. “It’s important to be on the inside of the first corner here. It is a lot quicker than you think. This track can be dirty on the outside line, so it is quite an advantage to be on the inside. You are almost better off being third and on the inside than second and on the outside. Because it is a very short track, there is a very short time to breathe. You see the car up front and you are already up behind him. It is very difficult to think about it and you have to go on instinct."

Adrian Fernandez kept Lowe’s Fernandez Racing five-for-five in LMP2 qualifying this season with his third class pole of the season. Next up is keeping the team perfect in races.

Fernandez set a time of 48.281 (111.845 mph) in the Acura ARX-01b that he will share with Luis Diaz. Lime Rock will make the fourth straight race that Acuras swept prototype pole positions and will start 1-2-3. The Mexican racing legend went 0.196 seconds faster than Dyson Racing’s Marino Franchitti in one of the team’s Mazda-powered Lola B09/86 coupes

“Dyson is getting closer. They were two-tenths away," said Fernandez, who owns a commanding 45-point championship lead with Diaz in P2. “They were a little slower in practice but they always seem to do better in qualifying. Our cars work well with cold tires. So we new we had to leave the pits fast to get heat in them as quickly as possible."

It has been a remarkable season for Fernandez and Diaz, who had more near-misses last year than most teams do in a career. But their luck has gone a full 180 degrees this season.

“It’s nice to get another pole. It is good for the team," Fernandez said. “It has been a long break and it feels good to get back in the car and continue the momentum we have from the start of the season."

Jaime Melo snagged the GT2 pole position for Risi Competizione and Ferrari, the first at Lime Rock for the Italian marque since 2004. Melo and Flying Lizard Motorsports’ Patrick Long went back-and-forth for the top spot, and Melo re-entered the track after Long set his fastest lap. He outpaced his Porsche rival by 0.064 seconds.

Melo’s time of 54.665 (98.783 mph) came a month after he, Lime Rock teammate Pierre Kaffer and Mika Salo won for the second straight year at the 24 Hours of Le Mans. The trio also won the 57th Mobil 1 Twelve Hours of Sebring to start the season, but Risi hasn’t won in the Series since.

“I had a good run, especially the second run. Maybe I was a little over the edge," Melo said. “We had some brake issues in the second practice and we didn’t know how competitive we would be in qualifying. After my first fast lap I came in to check the tire pressure and see how things were shaking out. It was unbelievable. I didn’t expect to go faster than 44.7, especially when I missed the first chicane. The car has really good balance."

“The track is better for us than longer ones because the straights aren’t very long," Melo said. “Ferraris are a little slower on the straight line than the other cars. This is a track where Ferrari can show better than other circuits. It’s completely different strategy than longer tracks. Starting on pole here is very important. I believe we can be there at the end of the race.

Faieta will team with Wesley Hoaglund.

“I expect there to be a lot of tough competition within our class," Faieta said. “I’ve got a good partner in Wesley and a great team in Gruppe Orange. I’ve known Wes for awhile but we just recently started driving together."

Snow qualified 0.488 seconds ahead of ORBIT Racing’s first entry of Ed Brown and Bill Sweedler. Snow and wife Melanie were winners in the first Challenge class race at the 3.06-mile Miller Motorsports Park layout just outside of Salt Lake City. Lime Rock is much smaller and much tighter but Faieta isn’t worried about traffic.

“I enjoyed running with the bigger, faster cars at Utah," he said. “Everyone is such a good driver that traffic doesn’t seem to be an issue. I like the track. It’s tight and technical, and it reminds me of a karting track which I like."

The American Le Mans Northeast Grand Prix at Lime Rock Park in Lakeville, Conn, is scheduled for 2:05 p.m. EDT on Saturday, July 18. The race will air live on SPEED. American Le Mans Radio presented by Porsche and Live Timing & Scoring will be available at Racehub on americanlemans.com. You also can follow the Series on Twitter.

The race also will mark the fifth round of the MICHELINÂ® Green XÂ® Challenge. Tickets are available at americanlemans.com and limerock.com.