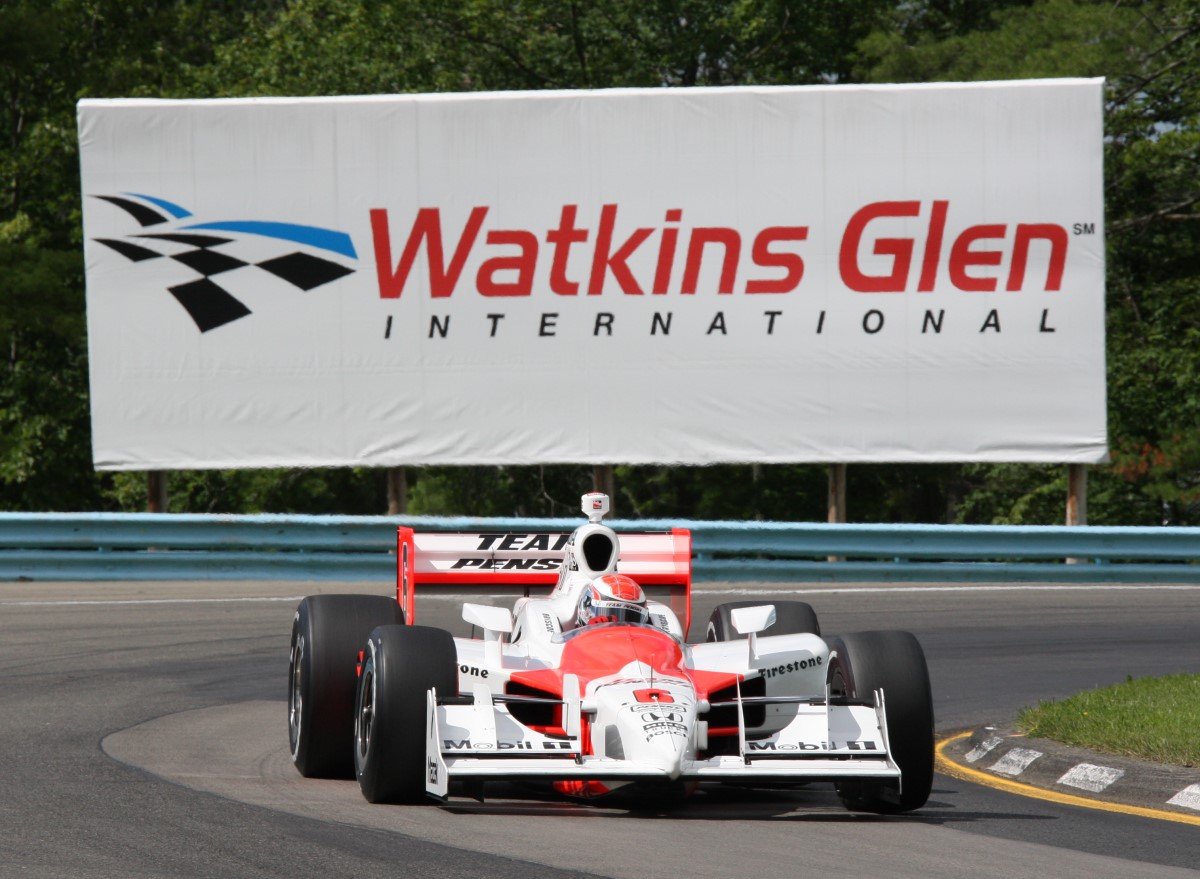 Ryan Briscoe put his Penske Dallara Honda on pole for the Camping World Grand Prix IndyCar race at Watkins Glen while his teammate Helio Castroneves was too slow to even make it out of the first round of qualifying. Justin Wilson manhandled his Dale Coyne entry to 2nd on the grid ahead of Scott Dixon, Mario Moraes and Graham Rahal (who later failed tech inspection and will be moved back 10 positions)

Dario Franchitti made it into the Fast 6 qualifying but crashed hard in the final turn on his first lap and will start 6th.

"I'm excited for Team Penske," said Briscoe, who also started from the pole at The Glen last year.

"Needless to say, qualifying was a bit frustrating because the Team Penske car is better than where we qualified," said Castroneves, who will start 14th. "It took us a little longer to get up to speed than we thought it would, and we just didn't have enough time to get a fast lap in there at the end of the session. I was hoping we'd be able to get one more lap before the end, but we just didn't have the chance."

It was the 180th pole for Penske Racing and in doing so Briscoe set a new track record for the IndyCars at Watkins Glen.

Briscoe is pretty confident going into tomorrow's race given the gap he has over the other drivers.

"The red tires were awesome said Briscoe and quite a bit faster than the blacks, which makes Justin Wilson's lap on the blacks pretty impressive."

Asked whether he can walk away from the field on Sunday given his gap to 2nd place Wilson Briscoe replied, "You never know what can happen in the race. Justin has two sets of reds left (Briscoe only has one new set) and with traffic and caution I might stretch out a gap only to see it eliminated with a caution."

Paul Tracy, making his 267th open-wheel racing start but the first at The Glen, will start 14th in the No. 15 GEICO KV Racing Technology car. Richard Antinucci, also making his first start at Watkins Glen International — and his first in the IndyCar Series — will start 20th in the No. 98 Novicomm LED Lighting Technology CURB/Agajanian/Team 3G car.

All drivers will start the race on the softer red tires except Ryan Hunter-Reay and Robert Doornbos.

Sunday's race starts at 1:00 pm ET and will be broadcast live on ABC.

RYAN BRISCOE (No. 6 Team Penske, pole): "I'm excited for Team Penske. I love this place. I came in after (qualifying session) 2 and had the run on the new red tire, then posted the 28.1 (lap of 1:28.1322). I haven't had this much fun in so long. It's unbelievable the speeds you can carry through the turns out there today. The balance of the car has been great. I'm sorry that the final session ended the way it did with Dario (Franchitti) in the wall. Hopefully we can follow through and have a good race tomorrow."

JUSTIN WILSON (No. 18 Z-Line Designs, second): (Would the results have been different with the full 10 minutes of green-flag laps?): "I'm not sure. I don't know if we had enough to pass Ryan (Briscoe). He was always doing a great job today. I'd like to think we could have got there, especially since he was on used tires and we were on a new set, but it's just how it goes. I'm very pleased. Everyone at Dale Coyne Racing has done a great job. These guys here have worked hard to get here. We tested, and it's always a flat-out mad rush, so I've got to thank them and everyone at Z-Line Designs. Hopefully tomorrow will be a good day." (How long will your sticker alternate tires last Sunday?): "I'm pretty confident they'll last, but I don't know. We'll see how things develop. It's nice to have one more set than most people. We'll see if we can use that to our advantage and make sure we have a good strong race. It's going to be a case of not making any mistakes."

SCOTT DIXON (No. 9 Target Chip Ganassi Racing, third): "I think the No. 9 car seems to race better than we qualify, and that's definitely been the tale today. We kind of hit on a setup later in the afternoon in the last few practices, and I think we're getting pretty close now. (Ryan) Briscoe in the Penske car is certainly quick, and it's going to be tough to beat him. Of course, it was like that last year, but we were able to come through in the race. It was unfortunate for Dario (Franchitti) with that crash, because now he'll start sixth, but I think he could have been on the pole. But both Team Target cars are in the top six, and we can win from there."

MARIO MORAES (No. 5 KV Racing Technology/Votorantim, fourth): "The KV Racing Technology team did a great job setting the car up for qualifying today. It really shows that the test we did here two weeks ago paid off, and I just hope that all of our hard work pays off for the race tomorrow."

GRAHAM RAHAL (No. 02 McDonald's Racing Team, fifth): "It's a physical place, and to run all those laps it gets pretty tiring. Unfortunately, we just didn't have enough to make it to that top spot. I hoped when Dario (Franchitti) crashed that would be the end of the session because I thought third would be as good as we were going to get. We're close, and tomorrow is looking pretty good."

DARIO FRANCHITTI (No. 10 Polaroid, sixth): "Qualifying is always fun here; it really physically tests you those three sessions if you make it to the Fast Six. You're really hanging it out there, and that's what I did in the Fast Six. I knew I had a guaranteed top six and the Polaroid car felt really good, so I just pushed hard and I got a little loose on the entry to that last corner, and it just bit me. There's so much grip in those Firestone reds (tires) and you have to take advantage of it, and that's what I was trying to do."

DANICA PATRICK (No. 7 Boost Mobile/Motorola, eighth): "I think we could have gotten a little more out of the Boost Mobile/Motorola car. The last lap was our quickest, but we had gained some understeer by then. If the car had been able to stay more consistent, we definitely could have started higher on the grid. There are so many good drivers this year; the field is super-competitive, so to be eighth is still good. This is the highest start I've had on a road course this year, so I think we can still pull out a strong finish."

Results after First Round