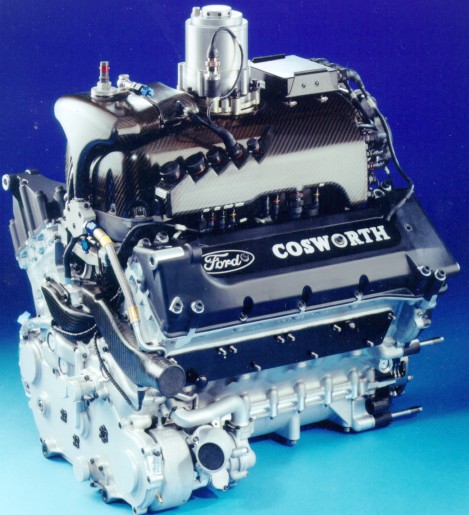 This year marks the 100th anniversary of Ford’s debut in motorsport. Historian Graham Robson summarizes a Century of achievement. On 10 October 1901, Henry Ford's brand new racecar won its first ever event at Grosse Point, Michigan, USA. As a result of that win, he gained sufficient financial backing to set up the Henry Ford Company, and the world-famous marquee was founded.

Since that debut victory, in a century of motorsport, Ford-powered cars have won countless races, rallies and speed record events and numerous national and world championships. From 1901, when Henry Ford personally won that original race, Ford has been ever-present at the heart of motorsport. The company’s achievements include…

Moving through Ford-powered front-engined racing at Indianapolis in the 1920s, and two Monte Carlo rally victories in the 1930s, Ford's motorsport effort intensified in the 1950s and 1960s. Wins on the East African Safari rally, in British saloon car racing, and in the first high-profile American NASCAR saloon-car events were only a prelude to what followed.

Ford made sure that it always had race-winning and race-reliable power units. Robust American-engineered V8s, in Jim Clark's Lotus-Ford at Indianapolis, in Galaxies for NASCAR racing, and in Ford GT40s, helped to bring this about. Ford-engined AC Cobra sports cars won the World Sportscar Championship in 1965, and mid-engined Ford GT40 cars notched up four consecutive victories in the Le Mans 24-Hour race – from 1966 to 1969. Numerous saloon car racing successes for V8 Mustangs and Falcons all reinforced the image of Ford dependability.

In Britain, Ford road-car engines were developed with Cosworth for single-seater racing series such as Formula Junior, F3, and F2, and Ford-powered cars were often dominant. Such events were so popular that a new 'training formula', Formula Ford, was founded in 1967 to start young drivers up the ladder to fame. Formula Ford, now more than 30 years old, is still the world's most popular, and universal, racing 'starter-formula'.

In 1967, Ford (again with Cosworth) made the logical move into Grand Prix racing, by introducing a Formula 1 engine. Making its race-winning debut in the Dutch Grand Prix, the Ford-Cosworth DFV V8 engine developed its own legend, and became the most successful F1 power unit of all time. In 1973, DFV engines won all 15 rounds of the series, and over a 16-year period, the DFV claimed victory in 155 World Championship F1 races.

The DFV’s most notable derivative was the turbocharged DFX, which made its name in North America. Starting in the mid-1970s, the DFX became the most successful power unit in CART/Indycar racing, where it ruled the roost for nearly 15 years. As in F1, Ford DFX-powered cars – McLarens, Penskes, Marches and Lolas – were dominant. The DFX also took over America's most famous motor race – the Indianapolis 500, winning every Indy 500 from 1978 to 1988, an unparalleled record of success. Later versions of the turbocharged Ford V8 were used in 1993 by 'rookie' Nigel Mansell, to win the PPG Championship at his very first attempt and by Jacques Villeneuve to win the series in 1995. For 2000 a new derivative, the XF V8 helped Ford to win the CART Engine Manufacturers' Championship crown.

In recent years, Cosworth has developed many successful racecar engines on Ford's behalf. In F1, the narrow-angle HB V8 succeeded the DFV, its career culminating in six victories in the 1993 F1 season – five by Ayrton Senna's McLaren. A new V8 engine, the 3.5-litre Zetec-R V8, was used by Benetton-Ford in 1994, when Michael Schumacher won eight of the season's 16 races, capturing the Driver's Championship for the first time.

Ford and Cosworth then designed a series of 3.0-litre V10s, the latest for the exclusive use of Jaguar-Cosworth. The 800bhp-plus power units are acknowledged as some of the lightest and most powerful engines in F1.

Back in the 1960s away from the glitz of single-seater racing, Ford developed its production cars to compete in world-famous races and rallies. Available in large numbers, all were powerful, robustly reliable, and sold at attractive prices. All over the world, cars like the Lotus-Cortina began beating heavier, large-engined machinery. The Lotus-Cortina won its first British Saloon Car Championship in 1964, with F1 ace Jim Clark and also dominated the European saloon car scene, in 1965 with Sir John Whitmore.

Ford then developed the original superfast Escort, the Twin-Cam. This, and its RS-badged successors, the Escort RS1600s and RS1800s, became ultra-successful race and rally cars. For more than 30 years, until the last-ever 'works Escorts' competed in the Rally of Great Britain in 1998, they set the pace all round the world. Heroes such as Roger Clark, Hannu Mikkola, Bjorn Waldegard, Ari Vatanen and Carlos Sainz all made their names in Fords, inspiring thousands of private owners to make Escorts their choice.

For the 1990s, Ford developed the four-wheel-drive Escort RS Cosworth (based on the Sierra RS Cosworth) not only as a stunning road car, but also as a successful rally car. After winning five World Championship rallies in its first season (1993) it went on to win the 1994 Monte Carlo rally. The mighty turbocharged Sierra RS 500 Cosworth had enjoyed a spectacular circuit-racing career – becoming so dominant that regulations were eventually re-written to blunt its success. The super-fast 550bhp/2-litre cars won the 1987 World Touring Car Championship, and the 1988 European Championship.

As European saloon car racing regulations turned towards 'Super Tourers' (for 2-litre cars with front-wheel-drive) Ford refined the V6-engined Mondeo into another race-winner. With Paul Radisich at the wheel, the Mondeo won the World Touring Car Challenge twice and then went on to claim 1st, 2nd, and 3rd places in the 2000 British Touring Car Championship.

Today, Ford is determined to be a front-running performer in everything it undertakes. Its premier global activity is the 2001 FIA World Rally Championship, with a trio of Focus RS WRC cars contesting the 14-round series. The Focus has already won five World Championship events, including the grueling Acropolis and East African Safari rounds and with Colin McRae, Carlos Sainz and Francois Delecour as team drivers, Ford is a strong contender for title honors.

With 100 years of motorsport success already under its belt, Ford is already planning ahead for the future. From Formula 1 (with Cosworth and Jaguar) and the prestigious CART/Champcar series (with Cosworth XF engines), to the hugely popular NASCAR Winston Cup series (where 5.9-litre/700bhp Taurus saloons won many of the 34 races in 2000) and top-class rally championships across Europe and the Middle East with seven Focus RS WRC cars, Ford is assured of continued motorsport glory in the new millennium.