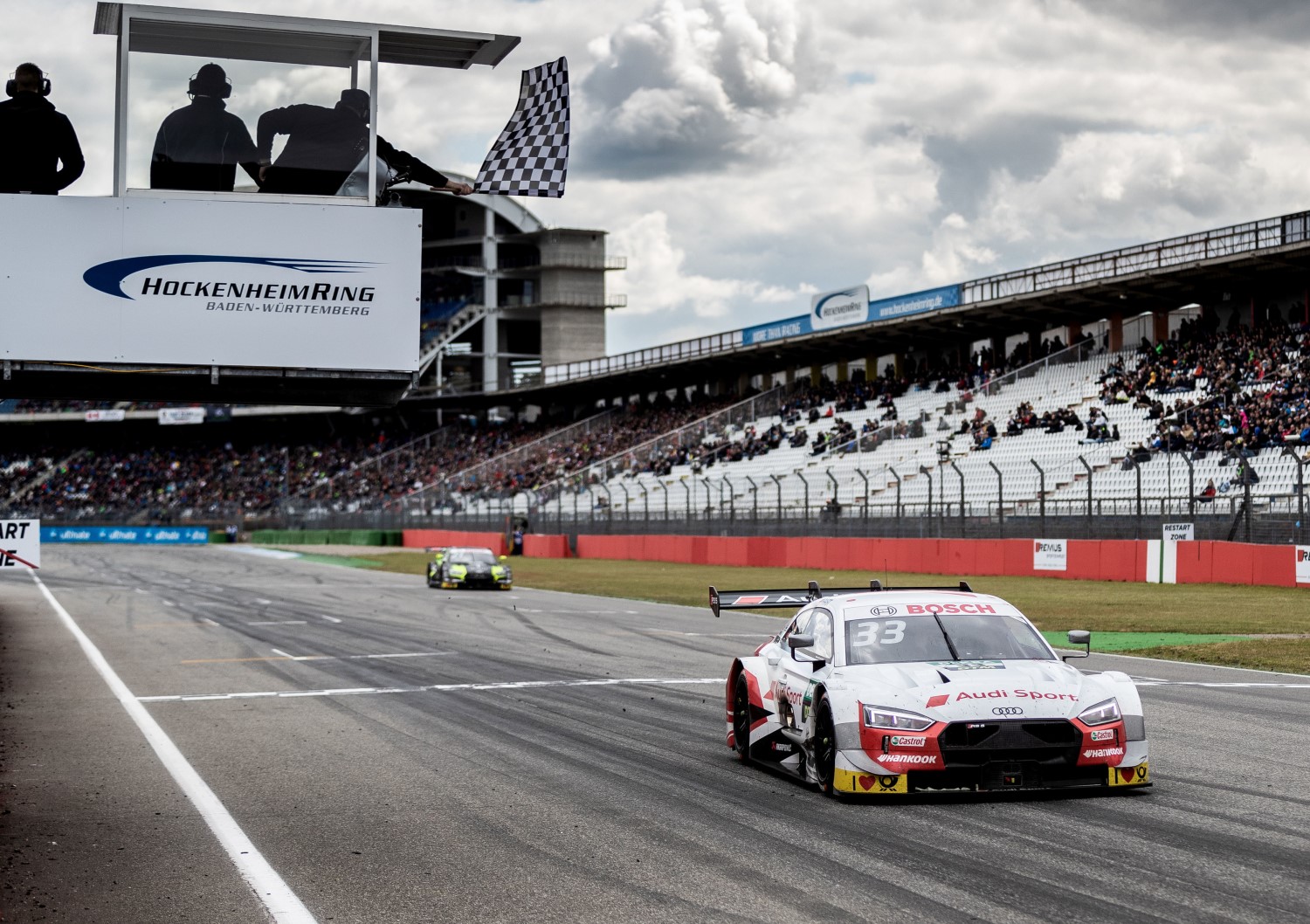 A double podium on Saturday, a one-two-three result on Sunday: Audi managed an impressive start to the DTM’s turbo era at the Hockenheimring. In Sunday’s gripping race, Rene Rast from Audi Sport Team Rosberg with a bold strategy won ahead of Nico MÃ¼ller and Robin Frijns (both Audi Sport Team Abt Sportsline).

After Saturday’s rain battle, the spectators in dry conditions on Sunday saw the first true trial of strength between the Class 1 race cars of Aston Martin, Audi and BMW. The clear winner after 37 thrilling laps: the Audi RS 5 DTM with its new, more than 610-hp two-liter four-cylinder turbo engine.

Bram Schot, CEO of AUDI AG, witnessed the one-two-three success in the pit lane and was obviously impressed about the DTM’s overall appearance as well. “I really enjoyed this. The atmosphere, the enthusiasm for the series, the plus in performance – this tastes moreish."

Head of Audi Motorsport Dieter Gass was looking for the right words after the finish: “Honestly, I’m rather speechless. After the qualifying, we weren’t able to expect such a result. With Rene, we chose an aggressive strategy. The times he set driving through the field are incredible. But Nico and Robin drove a strong race as well. It’s a fantastic result for Audi and sweet confirmation for the hard work over the last few months. And for the DTM it was a successful start to the turbo era."

Rene Rast once again showed an exceptional performance. Following a problem in qualifying, the German had to settle for 16th on the grid. Even so, the 2017 DTM champion went on to claim his eleventh victory in the DTM. Audi Sport Team Rosberg called Rast into the pits for a tire change during a safety car period. The Audi driver perfectly used the advantage of the fresh tires and within just seven laps fought back from 15th to 1st place. During the mandatory pit stop on lap 22, he just briefly lost his lead and subsequently drove victory home in commanding style.

“Overtaking nearly the whole field on a few laps is especially good fun for a race driver," said Rast. “Many thanks to Audi Sport, to my Rosberg team and to the mechanics who gave their all. We had a brilliant strategy today. I just had to drive the car home. What a day!"

Nico MÃ¼ller and Robin Frijns, who both started the race from the second row and with different strategies finished almost simultaneously in positions two and three, completed Audi’s podium lockout. MÃ¼ller pulled off a sensational start from fourth to second while Frijns dropped to seventh. The Dutchman made up several positions in the final stage.

“After yesterday’s difficult day, this was exactly the right response," said MÃ¼ller. “I had a lot of fun out there and am sure it was a good race for the fans, too." His teammate, Robin Frijns, talked about a “crazy race": “I had a bad start and had to fight back. The car was really good. My thanks go to Audi and to the ABT guys."

Jamie Green in ninth position scored points as well even though the Briton received a drive-through penalty due to a collision. Following its strong result on Saturday (positions two and five), Audi Sport Team Phoenix experienced a “rainy day": Mike Rockenfeller (oil loss) and LoÃ¯c Duval (excursion into the gravel trap) almost simultaneously retired in the early stage of the race.

Pietro Fittipaldi from the WRT Audi Sport customer team in his second DTM race shone with the fastest race lap.

After the first two races, Audi is leading the DTM manufacturers’ standings with 110 points ahead of BMW (93) and Aston Martin (9). In the teams’ classification, Audi Sport Team Abt Sportsline took the top spot. In the drivers’ classification, Robin Frijns as the best Audi driver is ranked in second place, just three points short of Marco Wittmann (BMW), ahead of Rene Rast in position three. The next two DTM races will be held at Zolder, Belgium, on May 18/19.