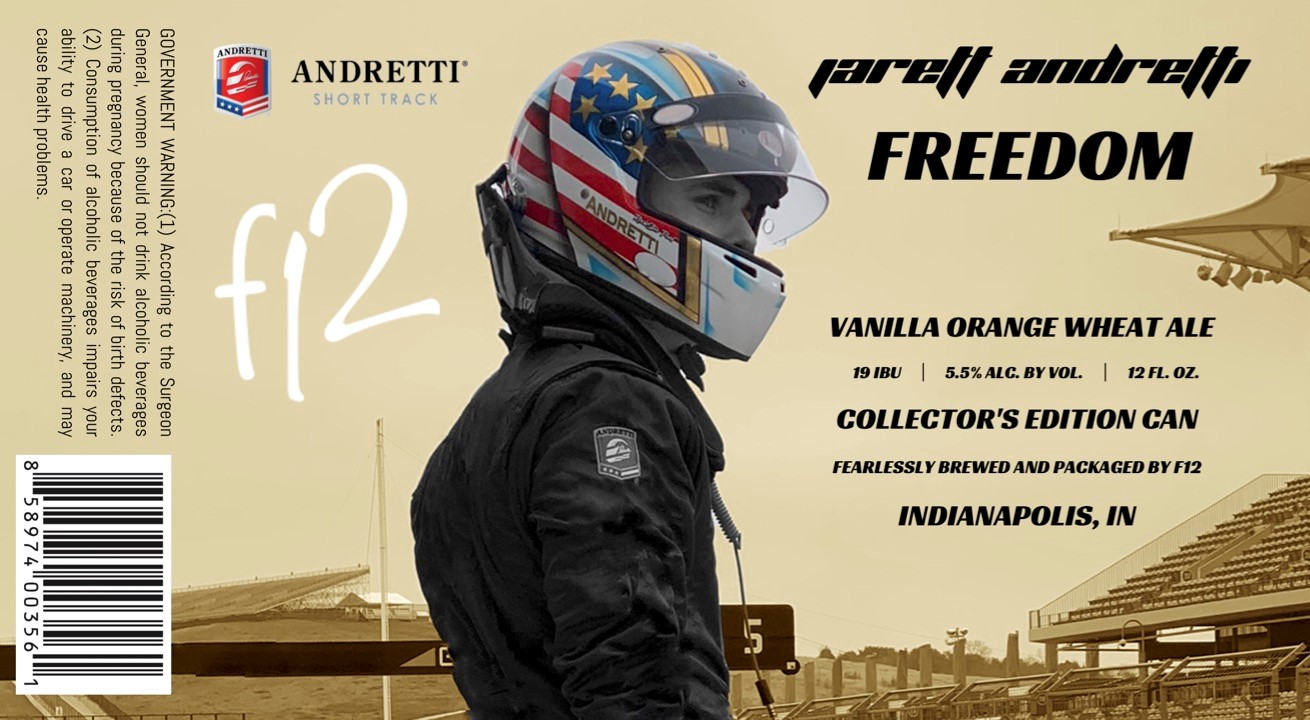 Continuing a diverse season on and off the track, Jarett Andretti is proud to introduce Flat12 Bierworks to his racing program. The racing-themed Indianapolis brewery will be an associate sponsor on the No. 18 Sprint Car for Andretti Autosport Short Track. Andretti will continue to his race his Sprint Car when not competing in the Pirelli GT4 American Series with Andretti Autosport and making his Indy Lights debut in the Freedom 100 at the Indianapolis Motor Speedway in May.

Jarett with be the face of the new F12 lineup, which will launch on May 24th with the year-round flagship Jarett Andretti 18 (Orange Wheat) and special release Jarett Andretti Freedom (Vanilla Orange Wheat) with a collector’s edition can to commemorate Jarett’s Indianapolis Motor Speedway debut in the Freedom 100 on the same day. The new F12 brand will be an homage to the fearlessly – and unapologetically – competitive edge of athletes like Jarett.

The new school approach to F12 will complement the long-standing old school roots of Flat12 Bierwerks, established in 2010 as one of the first production breweries in Indianapolis. A tribute to the gladiators of sport, the F12 brand will focus on individuals who have the courage to compete in some of the world’s most dangerous events while Flat12 will remain as the classic Indianapolis mainstay everyone has come to love over the past eight years.

“It’s impossible to overstate how thrilled I am to work with Jarett and the entire team at Andretti Autosport Short Track," said Jason Wuerfel, CEO of Flat12 Bierworks and Books & Brews. “My primary goal for Flat12 is to honor the rich racing tradition in the city of Indianapolis. The moment I met and got to know Jarett it became clear to me that he could take to an entirely new level. While we’re continuing to follow the racing theme, I’m extremely excited for Jarett to be the face of the new, cutting-edge F12 brand. Fans can expect a lot of fun events, appearance, promotions, and online content in the near future."

Andretti is currently in the middle of one of the busiest race seasons of his young career. He’s already scored numerous Top-Five finishes in the both the GT4 American Series Sprint and Sprint X Series and has also scored several Top-Five finishes in his Sprint Car earlier this season, too. His year has been highlighted by the announcement that he will make his debut at the famed Indianapolis Motor Speedway in the Indy Lights Freedom 100. It’s a perfect time for Flat12 to come aboard his racing program.

“It’s a great time to have new partners such as Flat12 to come on board with us," said Andretti. “I have a passion for our Sprint Car program and Flat12 has a passion for racing and brewing the best beer in Indianapolis. It’s obvious there are synergies and I’m proud to be representing Flat12 at the track and participating in exclusive events with them."

Andretti is a graduate of North Carolina State University who now lives in Indianapolis and races full-time. He is the son of John Andretti, cousin of Marco Andretti, the grandson of Aldo Andretti and the great nephew of Mario Andretti. He has carried on the family racing tradition and has championships in go-karts, the USAC Eastern Ignite Pavement Midget Series, the 410 Sprint Car division at the Lawrenceburg Speedway and is also an Indiana Sprint Car Series champion. In addition, Andretti is the 2014 USAC National Sprint Car Rookie of The Year and a former Rookie of The Year at the Oswego Speedway in the supermodified class.

Flat12 Bierwerks was formed in 2010 to embody the history of the game-changing Flat12 engine and the great racing tradition of the city of Indianapolis. They believe in the fundamental principles that make professional racing and our great city unique: the spirit of competition, teamwork, drive, determination, and working to get better each and every day.

Over the past eight years, Flat12 has established themselves with both Indiana classics like Half-Cycle IPA and Pogue’s Run Porter as well as new, innovation products like Idle Lap Session IPA and Pace Lap Light Cream Ale. The taproom features over 32 taps and a brew crew that is dedicated to finely-tuning the lineup each and every day, never settling for anything but the best.