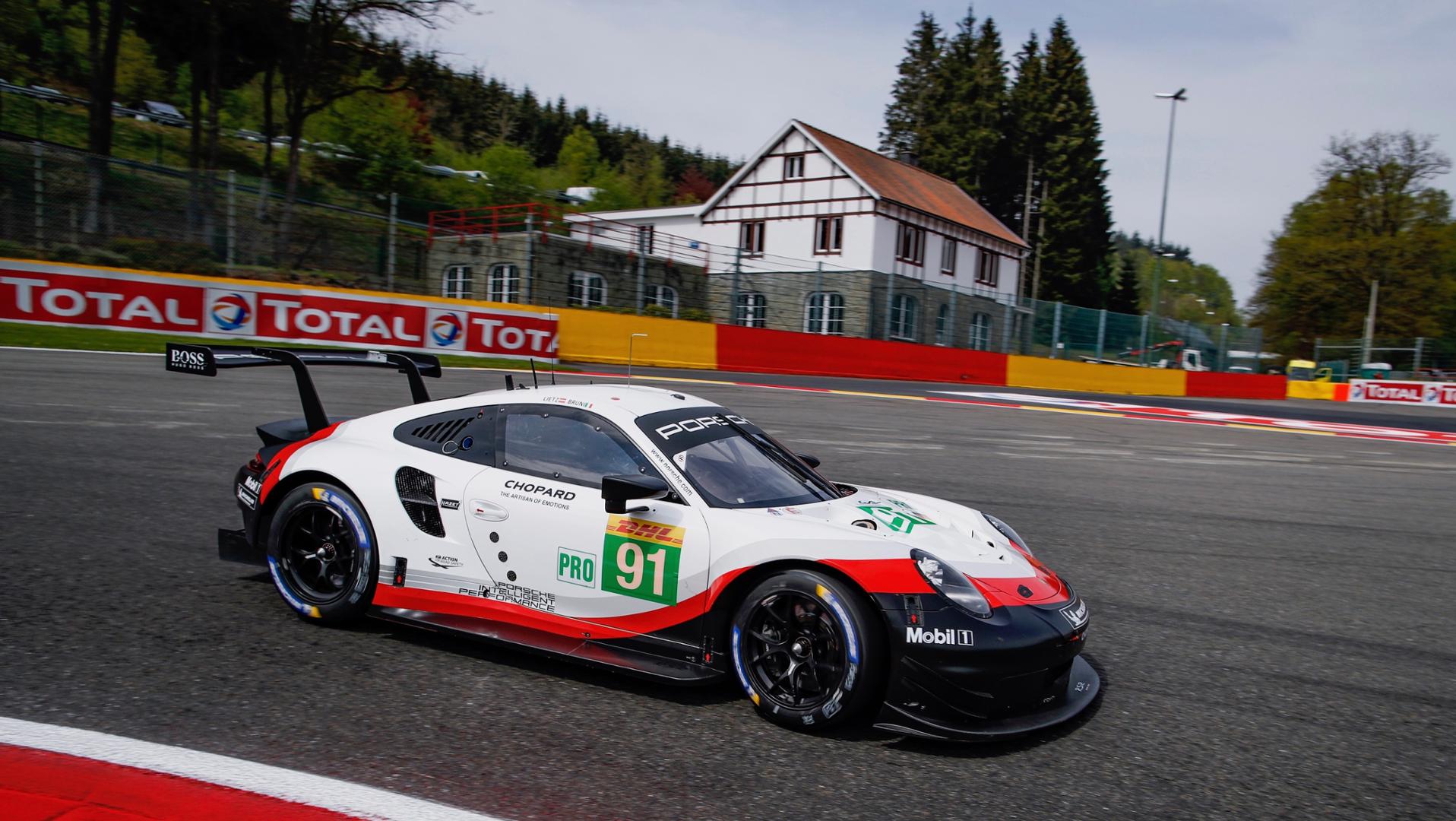 Porsche reaches a match point at round seven of the FIA Sports Car World Endurance Championship (WEC) at Spa-Francorchamps (Belgium). The factory squad from Weissach could take home the manufacturers’ title at the penultimate round of the 2018/2019 WEC Super Season.

Two of the ca. 510 hp Porsche 911 RSR will go up against vehicles from Aston Martin, BMW, Ford and Ferrari. The six-hour race on May 4th marks the second visit to the Belgian venue in the current WEC season. It was here that the Super Season took off last year. At that event, the two works cars finished on positions two and four.

The 7.004-kilometer racetrack not far from the German border has a long tradition. During its rich history in sports car racing and Formula One, fans have been treated to many gripping and spectacular races over the years. The “Ardennes rollercoaster", as the Circuit de Spa-Francorchamps is often called due to its wildly undulating layout, includes 21 corners. Fast passages such as Eau Rouge and Blanchimont are as famous as the tight La Source hairpin.

The Sebring winners Gianmaria Bruni (Italy) and Richard Lietz (Austria) tackle the race in the No. 91 Porsche 911 RSR. After seven of this season’s eight rounds, the pair ranks second in the drivers’ classification. Only their brand colleagues Kevin Estre (France) and Michael Christensen (Denmark) are in a better position in the identical vehicle with the starting number 92. The winners of the 2018 Le Mans 24-hour race and the six-hour event in Fuji (Japan) hold a championship lead of 25 points over their colleagues from the Porsche factory squad.

Three Porsche customer teams field a total of four 911 RSR in the GTE-Am class. Porsche works driver Jorg Bergmeister (Germany), the American Patrick Lindsey and Egidio Perfetti from Norway drive for Project 1. The trio in the No. 56 car currently lead the drivers’ classification in the GTE-Am class and could also score an early title. Moreover, the squad from the northern German town of Lohne are on track to claim the team championship. Driving the No. 86 car for Gulf Racing is Porsche Young Professional Thomas Preining (Austria) and the two British racers Michael Wainwright and Benjamin Barker. Dempsey Proton Racing campaign a pair of Porsche 911 RSR. In the No. 77 vehicle, Porsche Young Professional Matt Campbell (Australia), Christian Ried (Germany) and Riccardo Pera (Italy) are determined to continue their good run. This driver crew won the previous two races in Shanghai (China) and Sebring (USA). Porsche Young Professional Matteo Cairoli (Italy) shares the cockpit of the No. 88 Porsche 911 RSR with the Italian father-son pairing Gianluca and Giorgio Roda.

The Porsche 911 RSR celebrated its debut in the WEC Sports Car World Championship at Silverstone in 2017. In the current 2018/2019 Super Season, the racer from Weissach has clinched first and second in the GTE-Pro class at Le Mans as well as the GTE-Am category class win. The water-cooled four-liter boxer engine is based on the seventh generation of the iconic 911 sports car and produces around 510 hp depending on the restrictor. At Le Mans, the number 91 and 92 vehicles raced in a special historic design.