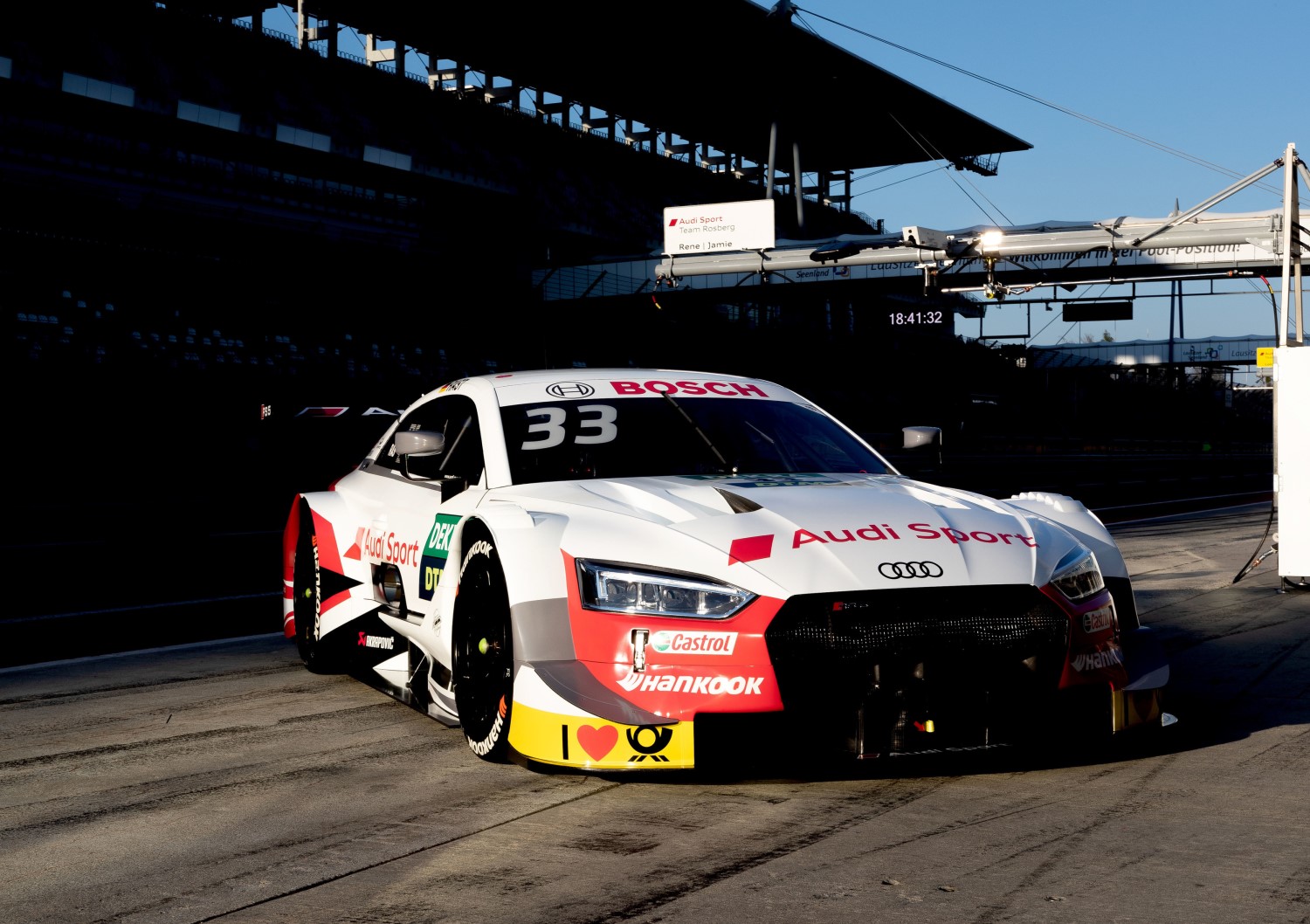 DTM goes full throttle: With the addition of new turbo-powered and luxury car brand, Aston Martin, a stunning new era of DTM begins at Hockenheim this weekend (3-5 May). The build-up to the 33rd season of the touring car series has been dominated by the introduction of the new four-cylinder turbo-charged engines, arrival of newcomers Aston, the debut of the first new customer team for several years, the return of Zolder, the track that hosted the first-ever DTM race back in 1984, and the daunting challenge faced by five hopeful, young rookie drivers.

“Finally, the racing will be back under the spotlight," explains Gerhard Berger, Chairman of the DTM umbrella organization ITR, ahead of the first of nine DTM weekends in 2019. “Given the new regulations, it is extremely difficult to accurately say who will be at the front."

Critical to the spectacle will be the series’ newcomers Aston Martin, the venerable British brand operating under the exclusive license of the Swiss R-Motorsport team. Despite a breakneck development and build program, R-Motorsport has confirmed that there will be four Aston Martin Vantage DTMs on the Hockenheim grid. These will be driven by former champion Paul Di Resta (GBR), Daniel Juncadella (ESP), and newcomers Ferdinand von Habsburg (AUT) and Jake Dennis (GBR).

There will be five DTM newcomers at Hockenheim. In addition to Habsburg and Dennis, South African Sheldon van der Linde (BMW), Jonathan Aberdein and Pietro Fittipaldi (both Audi) are all competing for DTM points for the first time. The young Brazilian, test driver for the Haas Formula 1 team, is the grandson of double F1 World Champion Emerson Fittipaldi.

Wittmann is a big fan of the new regulations: “I’m pleased that we have more power," he says. “We drivers feel it – and it’s visible to the fans from outside the car. The turbo sound of the cars is very cool. We can all look forward to a great start to the new season." Aston Martin driver Juncadella says: “We have to be realistic. We have a car that has been designed and built in a short time, so we still need to test and understand a lot. On the first race weekend, I’m not looking that much at the results yet. But I’m a racing driver and, of course, I always want to win."

In the meantime, the current DTM champion Gary Paffett will be watching closely from afar. The Brit has moved on to Formula E after Mercedes’ departure last year. “The DTM has played a special role in my life," he says. ‘In 2019, the DTM has had the courage to embark on a new path – with a new set of technical regulations. For me, from my new perspective as a fan, it will be very intriguing to see how the balance of power develops."

Under the bonnet, the new, efficient two-liter, four-cylinder turbo-charged units deliver about 610 hp and 650 Nm of torque. The minimum weight of the cars has also been lowered, to 986 kilograms. Compared to last year, the new-generation DTM Cars are about three seconds faster per lap. The new regs have also brought about a change in driving style, not least because of a new rear wing that works in conjunction with a modified rear diffuser and new front-end that produces lower downforce, and increased straight-line speeds.

The net outcome is that the cars should be more challenging for the drivers. Pre-grid ‘launch control’ has also been banned, placing even greater emphasis on the drivers. And their handling of the clutch off the line. “The start will be one of the biggest challenges for us drivers," says Audi driver Rockenfeller. “For me it’s still a big challenge, which I hope to get a grip on quickly."

New to the calendar: Zolder, Assen – and Fuji’s show-stopping encore

DTM will travel to two new racetracks in 2019. The first will mark an emotional return to Zolder, the Belgian track hosted the first-ever DTM race back in 1984, and was a mainstay for much of the 1980s and ’90s. Dutch circuit Assen, which has been an integral part of the MotoGP calendar for years, will be entirely new for the DTM.

In November, race fans will be treated to a very special encore. At the Fuji Speedway, the DTM and the Japanese SUPER GT series will host a joint non-championship event. The previous month, at the DTM season finale in Hockenheim, a small number of SUPER GT vehicles will participate in the DTM race without competing for points. The cars of both series are based on the jointly developed “CLASS 1" regulations. At Hockenheim, Aston Martin, Audi, BMW, Honda, Lexus and Nissan will therefore stage an historic summit.

The new W Series: an integral part of the support program

The DTM features a strengthened support program in 2019. On the first six race weekends of the season, the new women’s single-seater category W Series will feature on the schedule. Porsche’s popular one-make series from Germany, Benelux and France will also feature on six occasions. The “Tourenwagen Classics" will guest at five events.

Away from the racetrack, DTM also has much to offer in 2019. Fans can expect a colorful entertainment program in the Fan Village with driver appearances on the fan stage, autograph sessions and food trucks. At Pit View and Pit Walk, fans get a close-up look at the work of the race teams. Access to the paddock is included in the ticket price for the first time in all ticket categories (while stocks last). The highlight of the entertainment program is a concert on Saturday evening. At every race weekend, there will be a concert in the Fan Village. Access is free for all ticket holders. DJ Antoine will be the first musical guest at Hockenheim.

This weekend (May 4/5), the new DTM season kicks off at the Hockenheimring. Head of Audi Motorsport Dieter Gass talks about the new turbo era in the DTM, Aston Martin’s entry and the internationalization of the series.

Why should motorsport fans be excited about the 2019 DTM?
In the DTM, motorsport fans can always, and that’s again true for 2019, look forward to super-thrilling racing. With the more powerful engines and Aston Martin’s participation, the thrill will no doubt be raised to yet another new level.

What is changing as a result of the turbo engines?
The major change is that we have a turbo engine with some 100 additional horsepower. At the same time, it’s very important that in the DTM we’re now racing with a four-cylinder turbo engine, in other words, a high-efficiency engine of the type we also use in various performances levels in a very large number of our production models. Our drivers have been totally enthusiastic about the engine ever since the first test. They can clearly feel the additional power. The higher tire wear this entails, especially on the rear driven wheels, will pose a special challenge to their driving skills.

The DTM deliberately uses efficient turbo engines, and so continues to race with IC engine technology. Why?
This is an initial step. We’ve long been in discussions with the ITR about where to go from here. Of course, we always have to keep an eye on costs, but we’re definitely looking into options such as introducing synthetic fuels and hybrid technology.

Wouldn’t the DTM have to become electric?
Our factory-backed motorsport program deliberately rests on two pillars: Formula E supports electric mobility and the DTM modern, highly efficient IC engines of the type being fielded in Class 1 starting in 2019. At the current state, Audi will be selling more cars with IC engines than with electric powertrains for the foreseeable future. That’s why a racing series with modern IC engines definitely makes sense. In the DTM, we’re now going to use a 2.0 TFSI engine. Audi uses this engine concept worldwide in many production models and performance levels and it is an important element in the context of reducing fleet emissions.

With the new turbo engine for the DTM, how intensive is the exchange between motorsport and production that has traditionally been very important at Audi?
That was a decisive reason why we took a strong stance on the DTM using the turbo engine. The new Class 1 regulations focus on efficiency and lightweight design – both are extremely important in everyday driving as well. In racing, we point out approaches that will hopefully make their way into future production models as well – In Formula E just like in the DTM.

In 2019, the DTM will for the first time see a customer team competing again: WRT Team Audi Sport. What are your expectations of the Belgian outfit?
WRT is a highly professional team that has been celebrating many successes in Audi customer sport for years. WRT now wants to take the next step and move up to a higher level. I know they’re able to do this and definitely expect some positive surprises because they receive the same ‘material’ as our factory teams – very similar, by the way, as our Formula E customer team Envision Virgin Racing that scored a Formula E race win in only their third event.

What’s your assessment of Aston Martin?
The participation of this international premium manufacturer is good for the whole series. I expect Aston Martin to present themselves on an equal footing.

What can fans look forward to at the first joint race of the DTM and the Super GT in Japan at the end of November?
It’ll be a super-spectacle when we’re on the grid with six manufacturers (Aston Martin, Audi, BMW, Honda, Lexus and Nissan) and more than twenty cars. That’s going to set off a real fireworks of racing. The guest entry of the Japanese manufacturers in the DTM finale at Hockenheim will be very interesting as well.