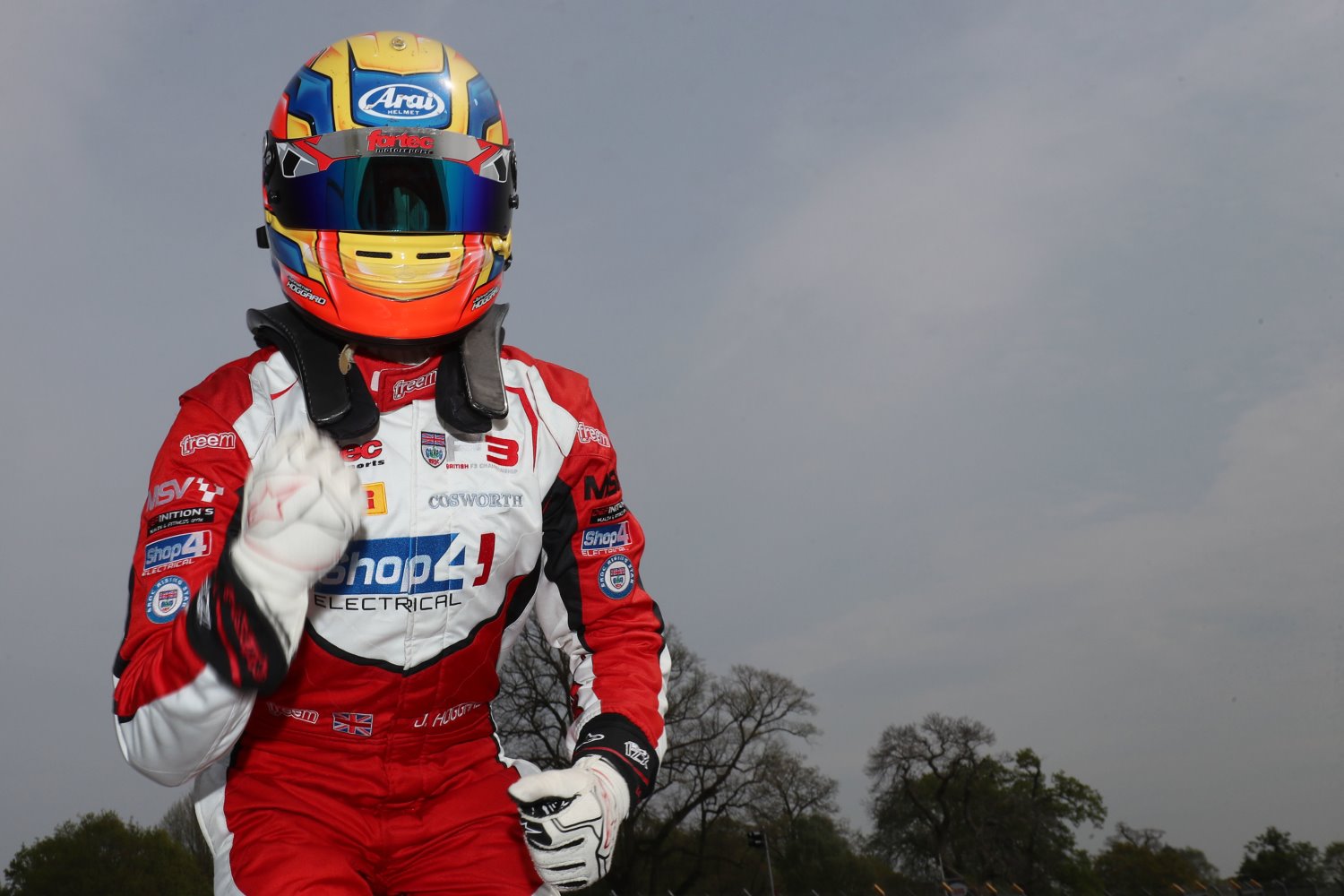 Carlin's Kaylen Frederick and Fortec Motorsport's Jonathan Hoggard claimed a race win each at Oulton Park today (Monday) as the BRDC British F3 Championship produced a hat trick of winners on the first weekend of the year.

Frederick followed up team mate Clement Novalak's victory on Saturday with a triumph of his own this morning, converting pole position into a dominant win ahead of fellow American, Double R's Neil Verhagen, with Manuel Maldonado third.

Hoggard then claimed his first British F3 win in race three after capitalizing on a mid-race tussle between pole sitter Ayrton Simmons and Novalak. Simmons recovered to take second on the road, but was penalized post race, handing the place to Novalak.

Novalak leaves Oulton Park with an 11 point lead in the championship standings over Hoggard, with Simmons third.

Frederick made a good a good start and then pulled away to take the win by almost five seconds, while Verhagen also operated in clear space in second, finishing almost six seconds clear of Fortec's Maldonado who was third, just head of Douglas Motorsport's Kiern Jewiss, who challenged him throughout.

Sasakorn Chaimongkol finished fifth on the road for Hillspeed, but a 10 second time penalty applied for a false start dropped him down the order to 13th at the end of the race. Josh Mason therefore claimed fifth for Lanan Racing, having held off a chain of cars throughout, with only Chaimongkol able to find a way past.

Mason finished half a second ahead of race one winner Clement Novalak, who climbed from 13th on the grid to sixth in the race, with Douglas Motorsport's Ulysse De Pauw and Fortec's Jonathan Hoggard finishing close behind in seventh and eighth.

Nazim Azman claimed his second top-10 result of the weekend with ninth for Chris Dittmann Racing, with Douglas Motorsport's Benjamin Pedersen completing the top-10 in the race.

At the start, Frederick out dragged Verhagen down to Old Hall, while Maldonado almost replicated his race two start from this round last year, as he carved through to third from sixth on the grid. As the field filtered through the first few corners, there was contact between Hampus Ericsson and Kris Wright at Shell Oils corner, dropping Ericsson down the order and Wright out of the race.

Frederick led by over eight tenths of a second at the end of lap one from Verhagen and Maldonado, who immediately began his race long defense from Jewiss, while behind them, a train began forming behind Mason, with Chaimongkol at the head of a pack of drivers looking to find their way past, and Novalak already up to seventh from 13th.

Frederick's lead was trimmed on the next lap, but thereon, he pulled away at around half a tenth of a second a lap to take a dominant win.

The main talking points were further behind, as Maldonado continued to hold off the race long challenge from Jewiss. The pair were separated by no less than a second throughout the encounter, with the Venezuelan eventually claiming the final spot on the podium by under four tenths of a second.

Meanwhile Mason was forced to fend off his pursuers for the duration. With his penalty in mind, Chaimongkol was determined to get past the British driver and extend a lead to maintain a decent position, but could only find a way past on lap nine, leaving him time to only pull out a gap of around four seconds over Mason. With the remaining runners all immediately behind Mason, it meant that Chaimongkol was only able to finish ahead of Ericsson, who was three laps down.

With Chaimongkol past, the next driver to try a move on Mason was race one winner Novalak, but with little time remaining was unable to replicate the Thai driver's efforts and settled for sixth, with De Pauw, Hoggard, Azman, Pedersen, Petersson and Ravishankar all within five seconds of Mason at the flag.

The top three drivers on the podium were presented with their trophies by BRDC Member Andy Meyrick, the Director of the BRDC SuperStars program.

Hoggard took advantage of mid-race skirmish to claim his first BRDC British F3 Championship victory in the final contest of the weekend at Oulton Park.

Hoggard held third place early on, but a mid race challenge from Carlin's Clement Novalak on then leader Ayrton Simmons resulted in the duo taking to the grass at Knickerbrook, promoting Hoggard to the lead. Hoggard then extended his lead to almost 1.5 seconds at the checkered flag.

Simmons challenged Hoggard for a lap after the drama, but the British driver with four new tires as opposed to Simmons' two new tires was able to pull away. Simmons built a gap over Novalak, only for the Carlin man to close up again towards the end. Simmons was handed a one second post race penalty by the Clerk of the Course, for gaining an unfair advantage, dropping him to third in the race behind Novalak.

Jewiss closed on the lead battle towards the end and claimed fourth ahead of Neil Verhagen and Ulysse De Pauw. A last lap move for Sasakorn Chaimongkol at Knickerbrook saw him secure seventh for Hillspeed ahead of Fortec's Manuel Maldonado, with Lucas Petersson and Benjamin Pedersen completing the top-10.

At the start, pole sitter Simmons made a great getaway to gain a clear lead on the run down to Old Hall, with Novalak slotting into second ahead of front row man Hoggard. Just behind them, Kaylen Frederick and Jewiss went wheel to wheel, with the pair making slight contact and sending Frederick on the grass down through The Avenue, dropping him towards the tail of the field.

Simmons held a lead of over a second at the end of the first lap, but Novalak began to close him down, narrowing the margin down to just over half a second before Simmons pulled away again briefly on lap five. The pair were much closer again on lap six, with Hoggard hovering behind them and poised to pounce on any errors.

The drama happened on lap seven as Novalak got alongside Simmons over Hill Top. Simmons braked late and went across the grass at the Hislops chicane,and rejoined alongside Novalak again, who himself then took to the grass, allowing Hoggard to slice through.

Simmons looked to fight back immediately around the outside of Hoggard at Lodge, but that was to be the only opportunity as Hoggard began to pull away gradually. Next time around, Hoggard was over seven tenths clear, extending that to over a second on lap nine, and taking the flag by 1.471s.

Without an opportunity to fight back, Simmons held a firm second place as Novalak dropped back into the clutches of Jewiss, with Novalak now facing more of a threat from behind rather than focusing on another attack in front of him. Novalak began to close back in again towards the end, breaking free of Jewiss but ultimately running out of time to force another move, though gained second place after the post race penalty.

Jewiss's fourth place equaled his best result of the weekend, and was well clear of race two podium man Verhagen, who was over 10 seconds ahead of De Pauw.

The battle between Maldonado and Chaimongkol was a race-long affair, with Maldonado holding off a train of four cars for several laps. The train was headed by Chaimongkol, who again demonstrated his overtaking ability with a last lap move to claim seventh, while the Venezuelan held off the Petersson and Pedersen battle until the flag.

Nazim Azman secured 11th, despite falling away from the tail of the train after a late grassy excursion at Old Hall, with Frederick recovering to 12th after his lap one incident, but secured the Sunoco Fastest Lap of the Weekend award for his time in race one.

Hampus Ericsson finished a couple of seconds further back for Double R, with Josh Mason (Lanan), Pavan Ravishankar (Double R) and Kris Wright (Fortec) the remaining runners, with all 16 drivers completing the race.

The top three drivers on the podium were presented with their trophies on the podium by BRDC Member and multiple World Touring Car Champion Andy Priaulx.

Race one winner, Kaylen Frederick
"We knew we had the pace on Saturday and it was just a case of putting it all together, which we did today. I got a good start and was able to pull in front of Neil on the way down to turn one. I just kept my head looking forward and just ran my own race.

"It might have looked easy but all that time I made up was just me pushing the most out of the car that I could, so obviously it was quite on edge for me throughout the race, but it gave me quite a dominant win."

Race two winner, Jonathan Hoggard
"I struggled at the start and I think we need to do some more practice starts to make sure we get the technique right. Then it was a case of not being able to do much and just following the two guys in front. I could see what was going to happen when they started going side by side at a corner that doesn't really allow it, and I took my moment and managed to get into the lead and went from there.

"I made sure I was consistent without making too many mistakes and managed to pull out the gap a little bit at the end of the race."

Championship leader Clement Novalak
"We've done a proper job this weekend, we got out of it what we wanted. We were a little bit unfortunate in the last race but I think we maximized our potential, and hopefully we can carry this momentum forward into the next round.

"We knew coming into the weekend that it was going to be tough and there was going to be a lot of fast drivers around us. I think we've actually outdone ourselves on the reverse grid race [going from 13th to sixth]. All in all we've done a good job, I didn't expect it as good as this, I expected to have a good weekend but I think I've outdone myself. Hopefully I can keep going in the same direction in the next few rounds."