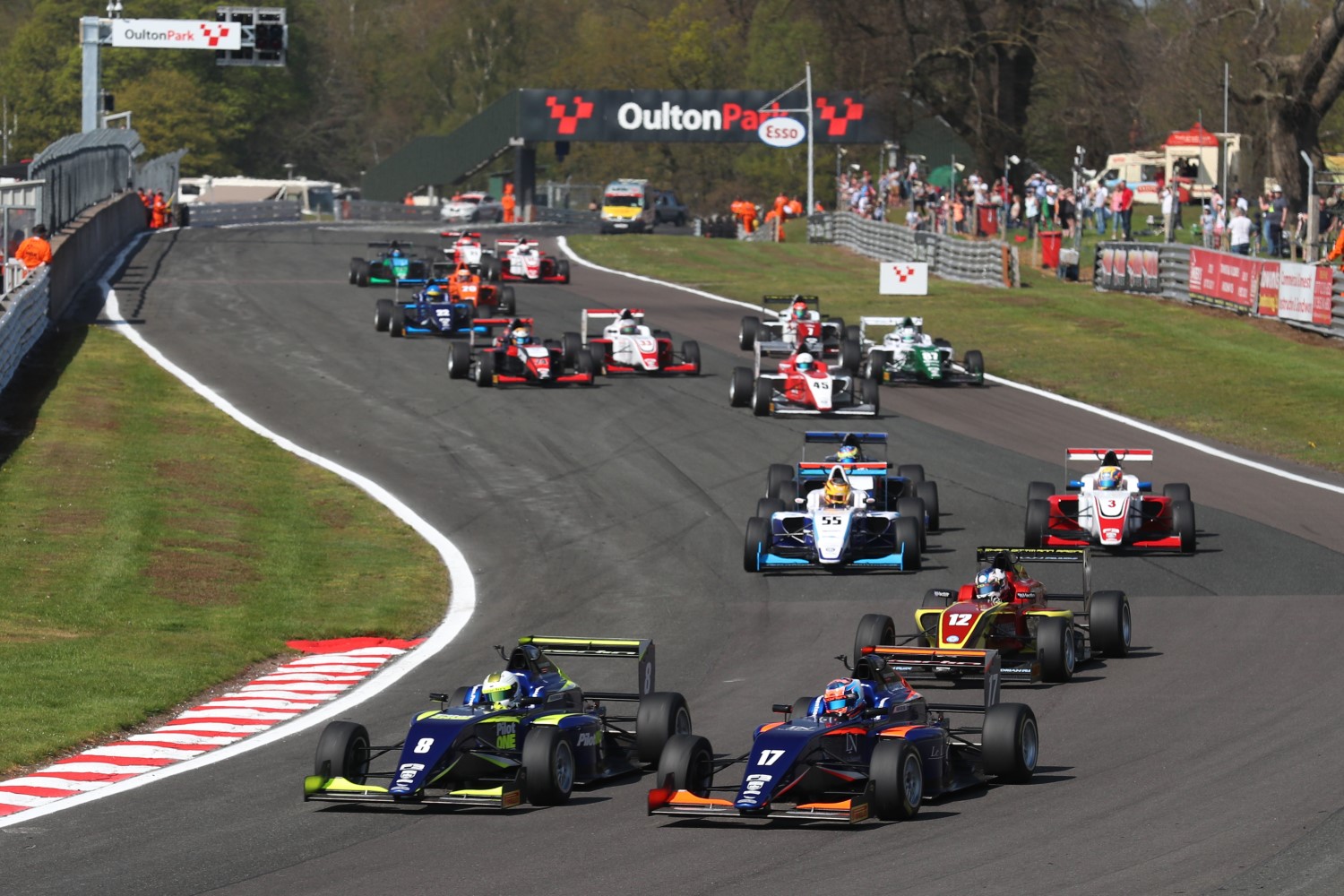 Carlin's Clement Novalak converted a front row start into a maiden BRDC British F3 win in the first race of the 2019 season at Oulton Park this afternoon (Saturday).

Novalak started from second place but overhauled pole sitter and team mate Kaylen Frederick on the first lap, and then survived a safety car restart to open up a lead of just over a second over Chris Dittmann Racing's Ayrton Simmons. Simmons claimed second, with Johnathan Hoggard third for Fortec Motorsports in his first British F3 race.

Qualifying
Carlin's Kaylen Frederick and Chris Dittmann Racing's Ayrton Simmons claimed the first two pole positions of the season in qualifying at Oulton Park this morning. The American topped a Carlin 1-2 in the 20 minute session, with team mate Novalak second fastest. Simmons was third in the session, but with the grid for race three now determined by each driver's second fastest qualifying times, will start on pole for the final race of the weekend on Monday afternoon.

Frederick's time, set with seven minutes of the session elapsed was enough to put him 0.169s ahead of Novalak on the grid for race one, who had set a series of times to put him on provisional pole early in the session, as he looked to replicate his qualifying effort from 2018.

Simmons headed a string of cars separated by tiny margins. Simmons was 0.035s off Novalak, and 0.054s ahead of Fortec Motorsport's Johnathan Hoggard, who was one of few drivers to improve their times in the final half of the session.

Neil Verhagen was the top Double R driver in seventh ahead of Hillspeed's Sasakorn Chaimongkol, who was just 0.044s off Verhagen's effort. Lucas Petersson and Manuel Maldonado completed the top-10 for Carlin and Fortec respectively, with the top-10 covered by 0.793s.

Hampus Ericsson (Double R) and Nazim Azman (Chris Dittmann Racing) were also within a second of the pole time in 11th and 12th places, with Douglas Motorsport's Benjamin Pedersen just over a second off pole in 13th.

The race three grid, now decided by second fastest times from each driver in qualifying will see Simmons on pole ahead of Hoggard, with Novalak third and Frederick fourth. The race three grid is even tighter than that for race one, with just 0.098s covering the front two rows on the grid, and 0.829s covering the top-13 runners based on second fastest times.

Race one
Carlin's Novalak converted a front row start into a maiden BRDC British F3 victory in the first race of the season at a sweltering Oulton Park this afternoon.

Novalak claimed the lead on the first lap from team mate Kaylen Frederick, and then had to contend with a lengthy safety car period, before claiming victory by 1.6 seconds over Chris Dittmann Racing's Ayrton Simmons. Johnathan Hoggard secured a podium on his British F3 debut after qualifying fourth, while Douglas Motorsport's Ulysse De Pauw held off a spirited charge from Hillspeed's Sasakorn Chaimongkol, who claimed fifth from eighth on the grid.

Kiern Jewiss recovered from a slow start to take sixth on the road for Douglas Motorsport, but was handed a 10 second time penalty by the Clerk of the Course after the race, dropping him to ninth. Jewiss' former F4 rival Hampus Ericsson therefore claimed sixth for Double R, Nazim Azman rose from 12th on the grid to secure seventh for Chris Dittmann Racing, with Fortec's Manuel Maldonado eighth, Jewiss ninth after his penalty and Lanan Racing's Josh Mason completing the top-10.

At the start, pole man Frederick and team mate Novalak made decent starts, with the pair going wheel to wheel around the first corner with Novalak taking the advantage to take the lead. The British driver held a lead of over six tenths at the end of the first lap with Frederick fighting off the attentions of Simmons.

Midway around lap two, and the safety car was deployed after a multi car incident involving Manuel Maldonado, Lucas Petersson, Benjamin Pedersen and Pavan Ravishankar, ruling the latter three out of the race, while Maldonado recovered back to the pits to replace his front wing. Maldonado was pitched off the circuit by Jewiss, and then spun back across the track, eliminating Petersson, Pedersen and Ravishankar in a chain reaction, for which Jewiss received his penalty.

The safety car circulated for several laps while the cars were recovered, with the race only resuming as lap six began. Almost immediately there was further drama as Simmons found a way past Frederick, with the American driver dropping to fifth on the restart lap, promoting Hoggard to the podium and De Pauw to fourth.

Not long after, Frederick pitted with a puncture after being contacted by Neil Verhagen, who damaged his front wing. Verhagen opted to continue running rather than pitting for repairs while Frederick lost a lap in the pits.

All this drama helped promote Chaimongkol up to fifth while also benefiting Jewiss, who after his slow getaway had dropped as low as ninth, while the remaining runners were also promoted up the order as a result.

At the front, Novalak created a small gap of around a second to Simmons, with the margin hovering at around 1.2 seconds, before the Carlin driver extended a lead of 1.6 seconds on the final tour, crossing the line to make amends from last year where he qualified on pole on his British F3 debut, only to retire on the opening lap. Simmons' second place was his first British F3 podium having competed in selected races last year, while Hoggard backed up his strong pre-season pace with his first podium. De Pauw and Chaimongkol's results ensured five different teams were represented in the top-five finishers.

The top-three on the podium were presented with their trophies by BRDC Member Paul Smith, a two time Le Mans 24 Hours class winner, as well as a contender in Formula Atlantic, British F3 and European Formula 2.

The second race of the weekend will take place on Monday morning, with all finishers reversed on the grid and handing pole position to Frederick, his second of the event.

Winner, Clement Novalak
"A great race for us, I got away better but then the safety car was out for quite a long period of time so we had to make sure the tires were still good when the race started again. At the restart I managed to build a gap and then Kaylen got passed and I had Ayrton behind me. We pulled away and it was all under control more or less.

"It's great to be fully concentrated on this championship this year, and I couldn't have asked for a better start and hopefully we can keep going in this manner."

Second, Ayrton Simmons
"We got past Frederick after the restart, he did a bit of a mistake into turn two and I managed to get the run to the hairpin. After that it was a bit of a steady race and I was trying to push to catch Clement, but he was a bit too quick for us in that race. But I'm really happy with the performance with the team and also with how I've performed so far this weekend so far.

"Hopefully on Monday I can get some good getaways and do what Clement did, which after turn one was a lights to flag win."

Third, Johnathan Hoggard
"I didn't get the best of starts and had to hold off fifth place in turn one but then just lost a bit of time to the guys in front and made a couple of mistakes. I then had to get my head back in the game when the safety car came out, and it gave me some time to have a think on how things were going on. I think we did quite well following Ayrton's move on Frederick and doing my own race, because I was on older tires compared to the other guys.

"I'm keeping my new tires for Monday and aiming for the race win when we start on the front row for race three. In the reverse grid race I'm focused on picking off positions one by one, but not taking too many risks."

Kaylen Frederick, race two pole
"It's a bit of a shame about what happened in race one, but I'm happy to be starting P1 again for race two and we'll look to make the best out of the situation. We clearly had the pace in the race so I need to make sure I do the same thing on Monday and I think we'll be in a better position."