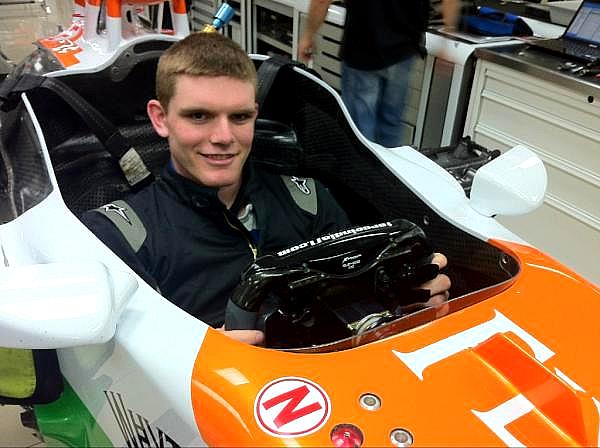 This rumor is now upgraded to 'fact' today. Young American racer and GP3 Series race winner Conor Daly has been chosen by the Sahara Force India F1 Team to conduct aero testing for the squad this week at Cotswold Airport in Gloucestershire, the team has announced this morning. The test will take place on Thursday, and will be the 20 year old Indiana native’s first taste of Formula 1 machinery.

“Conor visited the team’s Silverstone headquarters on Tuesday for a seat-fit and to familiarize himself with the systems on the car. It was a chance to meet his engineering crew and run through the functions on a Formula One steering wheel," the team’s website stated.

Fresh from his race win during the opening round of the GP3 season in Barcelona last weekend, Conor visited the team's Silverstone headquarters on Tuesday for a seat-fit and to familiarize himself with the systems on the car. It was a chance to meet his engineering crew and run through the functions on a Formula One steering wheel.

The test program on Thursday is one of four full-size aerodynamic tests that teams are allowed to complete during the course of the season. The focus is to measure aerodynamic forces to correlate with wind tunnel data.

"I am so excited to get my first taste of a Formula One car, but more importantly, to have the opportunity to help Sahara Force India develop their aero program," said Conor. "My career is on a great path right now and this is a significant step for me in understanding how complex a Formula One car can be. I want all of my supporters to feel the same excitement that I'm feeling right now."

05/15/12 Expect a formal announcement early Wednesday about American race car driver Conor Daly's motorsports future. Sources in Indiana, where Daly is from, confirmed that the announcement will regard a deal that Daly, 20, has signed with a well-regarded Formula One team.

This puts two American drivers on the fast track to a Formula One career, including Daly, son of former Formula 1 driver Derek Daly, and Alexander Rossi, the 20-year-old, California-born open wheel driver who is signed as a test driver for the Caterham F1 team, and who has been competing in the Formula Renault series.

Daly's announcement comes on the heels of his first GP3 victory last weekend in Barcelona, Spain, driving for the Lotus GP team. Daly, in his second year of GP3 racing, has also competed in Indy Lights and in the Star Mazda series, where he was the champion in 2010. Derek Daly raced in Formula One from 1978 to 1982 before moving to the CART series. AutoWeek