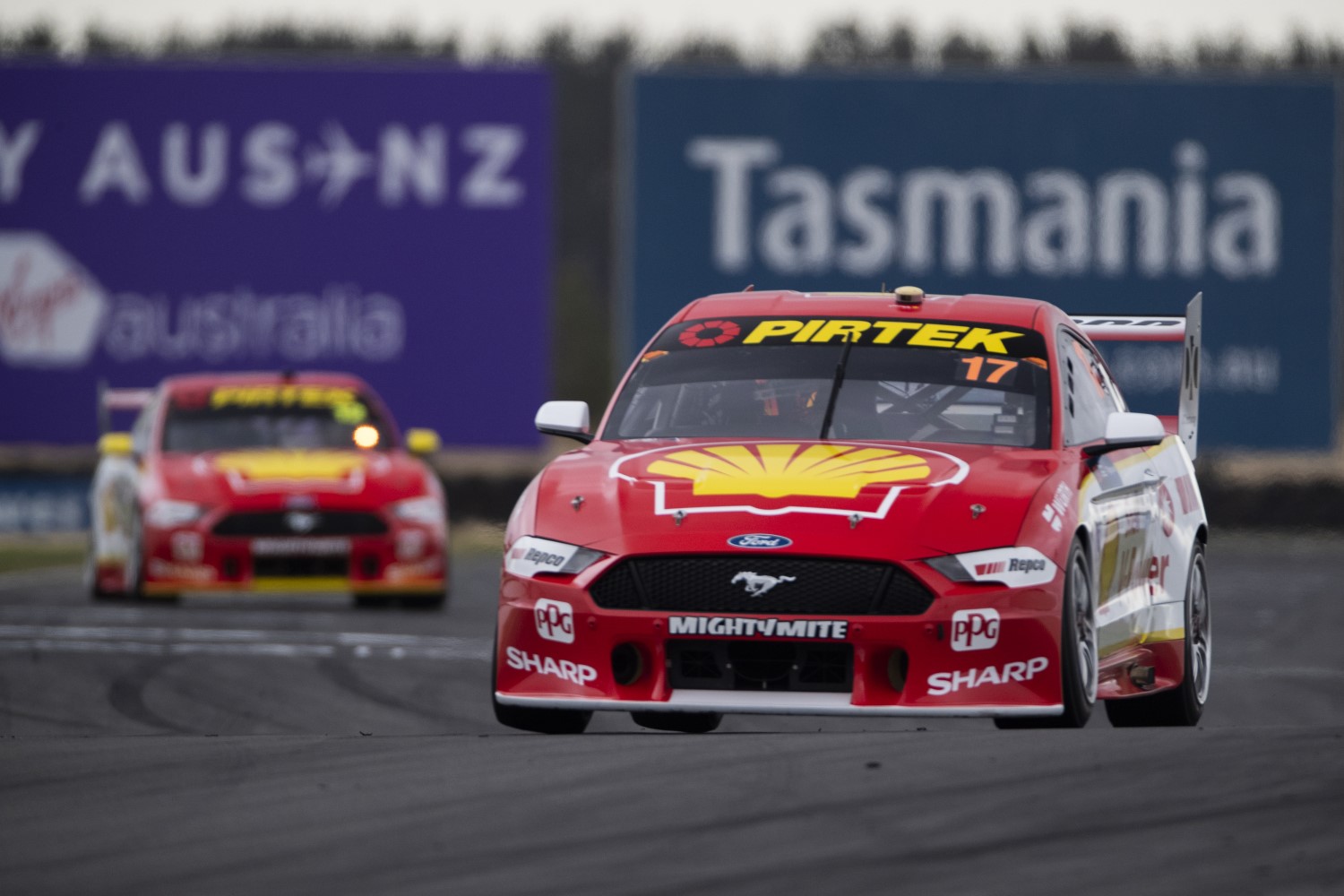 An ill Scott McLaughlin has fought through pain to put the Ford Mustang back on top in Tasmania and further distancing himself from Jamie Whincup in the Championship fight.

McLaughlin, suffering from a heavy dose of the flu, had started from the front-row of the grid alongside Mark Winterbottom, who snared his first ARMOR ALL Pole since 2016, while Whincup had a horror day, finishing last after a flat tyre and broken front end.

The young Kiwi Champion took the lead from the start on the tight Tassie track and maintained position throughout. He was joined on the podium by Shell V-Power Racing team-mate Fabian Coulthard with Shane van Gisbergen in third ahead of Winterbottom.

Whincup’s pain extended McLaughlin’s Championship lead to 135 points over Chaz Mostert who is now second. Whincup, who finished last, dropped back to fourth in the Championship behind Coulthard.

It was McLaughlin’s sixth win of the season from seven races.

“I will have a good sleep tonight, watch a bit of footy and come back better tomorrow," a visibly ill McLaughlin said. “That was for Ford fans and our team. There has been a lot of stuff thrown at us but we just fight on. We are a strong group."

Whincup on the other hand was fit and healthy, but not the result the seven-time Champion wanted.

It was a forgettable day for the man who has won in Tasmania more than anybody when he made a mistake in qualifying which ended in a red flag and him being excluded from the session.

He was demoted to the bottom of that session, starting the race in grid position 15.

Whincup made up several places on the opening lap and was in the fight until he suffered the flat tyre and a broken front right axle, putting him well and truly out of the race.

“I must have run over a black cat or something," Whincup said “We went from bad to worse. We were back in the pack and had to have a go. It’s amazing how fast things can change in this game."

Winterbottom has claimed his first ARMOR ALL Pole with the IRWIN Racing Holden in his third event with Charlie Schwerkolt's Team 18, and took his first pole in exactly 1,000 days.

Winterbottom turned a 50.6920s aboard his Triple Eight-built Commodore in the third and final phase of knockout ARMOR ALL Qualifying to pip Scott McLaughlin by 0.004 seconds.

"It’s awesome. I’m a bit emotional, it’s been a while," Winterbottom said. "I’m so proud for Charlie, he’s been working his backside off to put this together. I’m lucky, it’s all falling into place and I get to play a part in it."

It also ended the run of pole positions for Ford's new Mustang in the 2019 season, in the seventh race. Winterbottom was passed by Van Gisbergen on the second last lap, denying the IRWIN team their first podium.

COULTHARD QUOTE: “No matter what they throw at us, this team digs in and gets it done. I couldn’t be prouder of everyone here at Shell V-Power Racing Team, we got the reward for the effort we’ve put it. We’ve had some rotten luck so far this year, but hopefully this is the point where it all turns around. We took a 1-2 here in 2017, and to take another one today is a credit to everyone."

MCLAUGHLIN QUOTE: “Yeah, today was pretty tough. I’ve definitely felt better, but there’s not much better medicine than a race win. I will have a good sleep tonight and come back better tomorrow. That was for Ford fans and our team. There has been a lot of stuff thrown at us but we just fight on. We are a strong group."