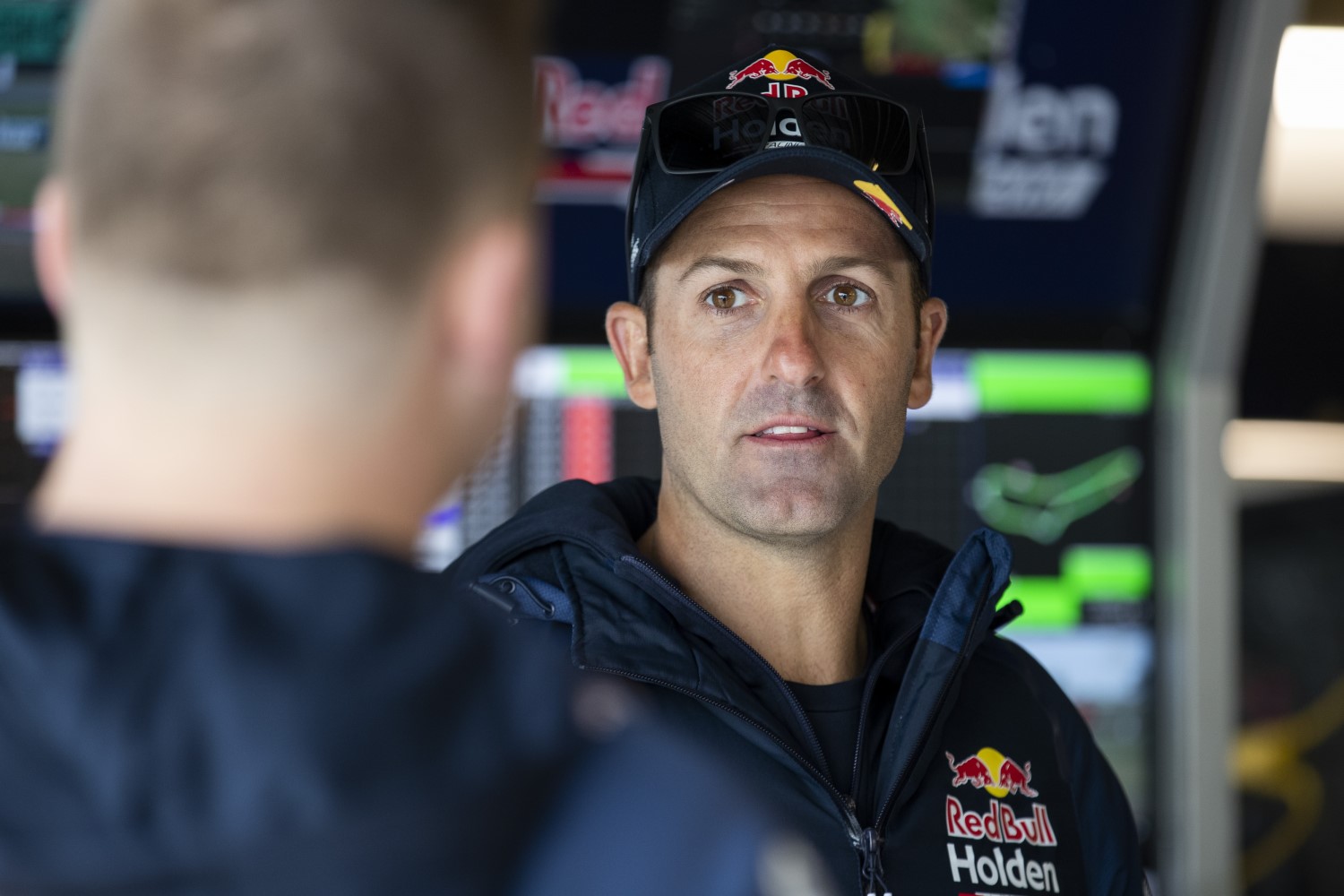 Jamie Whincup retaliated by laying down the challenge to the mighty Mustangs at his happy hunting ground in Tasmania, to lead a Red Lion Supercars fightback at Symmons Plains.

The seven-time Supercars Champion has won more races in Tasmania than any driver in history and continued his love affair with the tiny Launceston circuit.

For Whincup, a lover of records and history, set aside having more weight shifted to the top of his car after it was found the Fords and the Holdens had a Center of Gravity imbalance.

“I am not getting any younger so I will take every one I can get," Whincup said. “The car is good, it’s not perfect though. The last few years have been really good. Maybe I am asking for a bit too much."

The Red Bull Holden Racing team has won 10 of the last 12 races at Symmons plains.

Reigning Champion Scott McLaughlin was in the middle of a Mustang trio in sixth, seventh and eighth. Chaz Mostert was sixth with Fabian Coulthard seventh.

“I didn’t get it tougher myself," McLaughlin said. “As a driver you always want to go out there and do your best but overall I know what to work on and get better.

“It’s so close, you can’t afford a hiccup. We are in the ten for tomorrow so that’s the main thing. We get to have another crack."

Simona de Silvestro showed incredible car control when she spun at 180km/h on the main straight, somehow regathered the car from a full 360 degree turn in traffic and returned to the field.

"I just lost the rear. I guess I’m pretty lucky to not hit anything, but it definitely got my attention, for sure," De Silvestro said.

The Swiss driver’s acrobatics came just after three laps which didn’t help her attempt to break into the fastest group ahead of qualifying on the tricky short circuit.

Did CoG change make a difference?

“I’m 15 kilos heavier than Jamie and we’re pretty evenly matched every week, our car weighs the same in total, (but) I run a bit less lead, and we’re separated by nothing.

“I don’t think you’re going to get any answers this weekend; Phillip Island will be the real test."

Whincup, who stated that he set his fastest lap on four new tires but believed that others had used only two, suggested that difference in tire freshness as well as considerations around the new parc ferme procedure meant that little could be read into the apparent form reversal.

He alluded to the possibility of aerodynamic disparity between the Mustang and rival models, which would not be apparent until the Virgin Australia Supercars Championship arrives at the wide, open Phillip Island Grand Prix Circuit next weekend.

“The biggest factor today is tires," he declared.

“It would have been fantastic if everyone had have run greens at the end there and we see who’s positioned where, but our main opposition chose to save tires, so we don’t know their true performance.

“Another big factor is the parc ferme and they’re probably just running a race car (set-up), or they may not be, we just don’t know.

“But on top of all that, as SVG said, this is not an aero track at all. The true test is going to be at Phillip Island to see if we’re as even as we should be."

McLaughlin similarly claimed to have not felt a difference in his Ford from its Albert Park state to that of Symmons Plains, where the extra weight has been wrapped around the top of the roll cage.

“I think on a test day, if we had put it in and back-to-backed it, I would have been able to say, ‘Yeah, it was the difference,’" he explained.

“But just jumping in the car today, I can’t 100 percent tell you this is completely different. It just looks ugly."

The championship leader was seventh fastest in Practice 2, in which all but wildcard Jack Smith improved on their earlier efforts, but refuted suggestions that he had less favorable rubber than the likes of Whincup and van Gisbergen for his flyers.

“I ran four (new) tires; we just had a different warm up phase. What we did, we heated the lefts up, and then put the right sides on. But over the years I’ve tried a bit of both and my preference is probably four tires. So might find a little bit of time in that too maybe, I don’t know."

All attention now turns to tomorrow's intriguing three-part ARMOR ALL qualifying session, following which teams will only be allowed to make minimal changes before the opening race of the weekend which begins at 4:40pm local time.