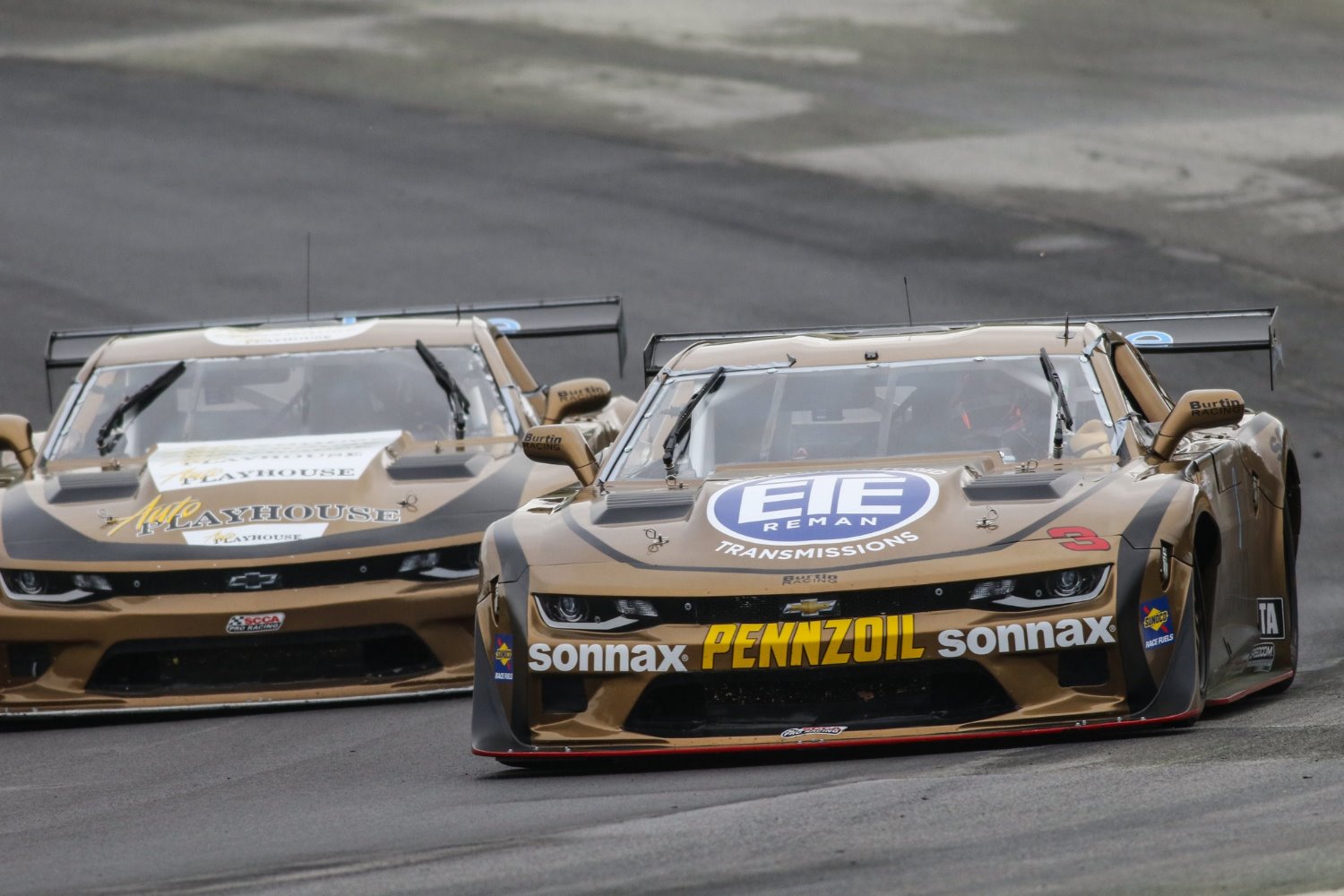 Tire selection, turns of fortune, traffic and treacherous weather all shaped the Trans Am Series presented by Pirelli Round 2 into a plot-twisting tale of two races in the TA and SuperGT (SGT) class event at Michelin Raceway Road Atlanta on Sunday.

The 40-lap race ran under green flag conditions from start to finish, with the race featuring variable track conditions, three TA class lead changes, and four different SGT class leaders, including one who established a 30-second margin on the field early in the going as Road Atlanta played host to another dramatic chapter of Trans Am competition.

But after a dynamic race, it was a penultimate lap overtake that saw Lawrence Loshak capture the TA class win, driving his No. 3 Pennzoil/Elavon/GoShare Chevrolet Camaro to nearly a five second victory over his Burtin Racing teammate Tomy Drissi. Drissi, who led the race for 13 laps, recovered from a late off-track excursion to take second.

Three-time Road Atlanta winner Amy Ruman displayed her experience on the 2.54, 12-turn road course and crafted an advantage as she waited to make her move for a podium finish. Chris Dyson and Simon Gregg rounded out the TA top-five.

Due to the inclement weather and variable track conditions the opening TA/SGT races started with a rolling single-file start. Loshak started from pole and was immediately locked in battle with 2018 Trans Am champion Ernie Francis Jr. The duel was called off after Francis was forced to pit lane to sort out a malfunctioning taillight before returning to action two laps down.

With Francis pushed to the back of the field, the focus shifted to Loshak, Drissi and Dyson. Using lapped traffic to his advantage, Drissi stole position from Loshak, pulling away with a 1.21 second advantage. Meanwhile, Dyson in third, continued to set fast laps of the race, chopping away at Drissi and Loshak’s lead.

“This was the hardest race I’ve done in a long time," said Loshak. “All I kept thinking was 100 miles, Lawrence, 100 miles. I used to do the rain dance and loved racing in the rain in other series, but I am a bit inexperienced in wet conditions with these Trans Am cars. We started on Pirelli slicks, looking for a rain line but with the Esses, the streams and the cold temperatures, we were having trouble getting grip. It was treacherous. But, as the track started drying, I had an incredible battle with my teammate. Traffic played a huge factor in us exchanging the lead back and forth. In the end though it was a one-two finish for Burtin Racing, and that’s all that matters."

Loshak paid back Drissi, using the lapped traffic and a rear bump to his advantage to make an inside pass, seizing the lead back from the No. 8 XMEN: Dark Phoenix Chevrolet Camaro.

“Lawrence Loshak and I are so evenly matched, and we were just on each other the whole race," Drissi said. “Going down the hill to the Esses, there was a Viper and we were coming so fast that I had to check up. I came back after him, and with two laps to go, I had another run on him but I was pushing so hard I went off. It’s tough coming down that hill in Turn 12, and it was still a little slippery, so he had to check up. If it weren’t for that, I know I would have gotten into him. I would have put both of us out, so I avoided him, went off, came back on and finished second. I didn’t have a good Sebring race, so I needed a good points today."

With a broken axel, Dyson tried to hold onto third place, but just as the white flag dropped, he retired to the pits.

“I was taking it easy early in the race," said Dyson. “Once I actually saw it start to dry up, I felt like I could start pushing, but I didn’t want to over pressure the Pirelli tires. I kept accelerating and braking gently so that I didn’t put a lot of side load into it. I started working the car harder and we started making big gains. But on two occasions when we were charging, we got held up in traffic. Then the axel broke, so we lost drive, and inevitably couldn’t finish the race."

Hanging behind Dyson, Ruman saw her chance to claim the last step on the podium.

“I’m pretty pleased with our result today," said Ruman. “We were a little far back, but at least we captured a third. Our game plan was not to make any mistakes at the beginning, because we knew it was going to dry out at the end, and hopefully, we would be there. I wish it could have been sunny so fans could see what everybody had, but we’ll take a solid third today for good points. I love Road Atlanta. I’ve had success here, three wins and lots of podiums. This track is busy but it’s challenging, and if you have a good car, it can be really fast. But if you have a bad car, it can be treacherous."

The SGT class, which features a wide range of entries including several Porsche 911 Cup cars, a Dodge Viper, and Ford Mustangs, found itself at a significant advantage early in the race as the field made the most of the grip on offer from the rain-specification Pirelli tires.

But it was a choice of dry tires for fifth place starting Brian Kleeman that saw him secure his first win in the SGT class. Fall Line Racing’s Mark Boden finished the SGT round in second and Lee Saunders wrapped up the SGT podium as a pair of Porsche 991 GT3 drivers Milton Grant and Tom Herb completed the top-five.

Boden got an outstanding start to the race, moving the overall lead and creating a significant gap to the field with his Pirelli rain tire selection. On Lap 19, Aaron Pierce passed Boden for not only first place in the SGT race but for the overall lead. Boden continued to charge the way but as the track dried his tires began to fall off, losing the momentum he built up in the rain. Boden eventually pitted to change to Pirelli slicks.

“We don’t have the fastest car out there – and we know that – so we had to do it all on strategy today," said Kleeman. “We threw the dice and I think we were the only ones out there on slicks. It was as absolutely a handful at the beginning and we fell way back. It was pretty treacherous, but once it started to dry out, we knew we had to click off the laps and close the gap, hoping those guys came in for tires – which they did. At that point, it was just a matter of staying in front and just holding on. By the end, it was pretty much a dry race. "

“Everybody out there was pretty good, and at the end of the day, the TA guys had to brake so early," said Boden. “More than the moisture, it was the track temperature. You mix that with cold weather, and that tire is not going to come up (to temp). Our error was we should have come in three laps earlier. We were hoping for the yellow so we could do a quick tire change and get out. Pitting under green really hurts you. It was fun, the Pirelli tires were just excellent and if we had a little more rain, we could have gotten the overall victory!"

The inside overtake on Drissi for the TA lead, yielded Loshak the CoolShirt ‘Cool Move of the Race.’ Kerry Hitt won the Masters award in the TA class following a ninth-place finish in the No. 19 Advanced Composite Products Inc. Cadillac CTSV. Milton Grant won the award in SGT, placing fourth in the No. 55 SentrySelfStorage/Fairfield Inn Porsche 991 GT3 Cup.

The TA2 presented by AEM class will close out the Road Atlanta weekend, taking the green at 2 p.m. ET Sunday. For more information on the classes and race results, visit GoTransAm.com or follow on Facebook, Instagram or Twitter @gotransam.

About the Trans Am Series presented by Pirelli: