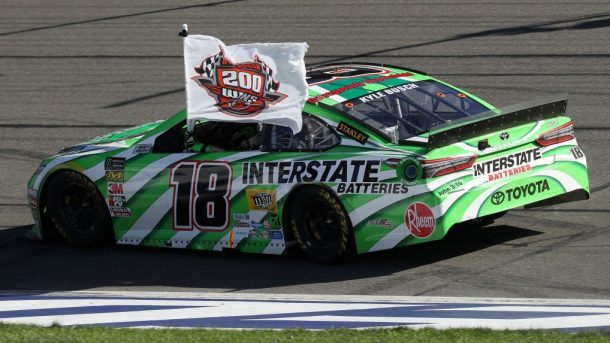 Joe Gibbs Racing has announced that it has renewed its on-going partnership with Interstate Batteries in a multi-year agreement that will extend the relationship beyond 30 years.

Interstate Batteries will continue to serve as the official battery of Joe Gibbs Racing and primary sponsor on the Monster Energy NASCAR Cup Series No. 18 Toyota Camry driven by Kyle Busch for six races.

“I tell people all the time that one of the great things about professional sports is the relationships you have a chance to develop over the years and I don’t know if there is a better example than what we have with Norm Miller and everyone there at Interstate Batteries," said Joe Gibbs, owner of Joe Gibbs Racing.

Interstate Batteries was the founding sponsor for Joe Gibbs Racing, helping the organization launch the race team back in 1992.

“We literally had nothing when we met with Norm and asked him to help us start this race team and now our new agreement will extend the partnership to more than 30 years," said Gibbs. “And what’s amazing is how it has continued through generations. Obviously, J.D. (Gibbs) played a big role in the relationship over the years and he developed a great friendship with Scott (Miller). And now, Coy (Gibbs) has become instrumental to our daily operations. When you reflect on all that has happened over the years and everyone that has been involved, I really think God had a role in bringing us together."

Interstate Batteries has been a part of nearly every major moment in Joe Gibbs Racing history including the organization’s first win when driver Dale Jarrett won the Daytona 500 in 1993. Interstate Batteries was the primary sponsor on the No. 18 in 2000 when Bobby Labonte captured the organization’s first NASCAR Cup Series Championship and continued to play a key role when Kyle Busch won JGR’s most recent Championship in 2015.

“I knew Kyle was something special when I first looked at his stats," said Norm Miller, Chairman of Interstate Batteries. “And now after so many wins and a Championship, we are really proud to continue with Kyle in our car for the foreseeable future."

Together, Interstate Batteries and Joe Gibbs Racing have visited victory lane 32 times in the Monster Energy NASCAR Cup Series, including twice with Hall of Fame driver Dale Jarrett, 21 times with Bobby Labonte and nine times with current driver Kyle Busch, including his most recent win to reach a career milestone of 200 wins. In addition, Interstate Batteries and JGR have combined to win three NASCAR Xfinity Series races.

“Our relationship with Joe Gibbs Racing and Kyle Busch has been such a blessing for all of us and we are so proud to extend this partnership to keep us together for what will be more than 30 years," said Norm. “It is a partnership that has been successful on so many levels. We’ve certainly had our successes on the race track with championships and many celebrations in victory lane, but it also helped us achieve our goals on the business front. It doesn’t work if it’s not good for business and obviously this is a partnership that has worked for what will be three decades. It also has been a success on a personal level as well with the relationships we’ve both been able to develop over the years. It has been very special."

“Rarely does a marketing opportunity come along that can change the trajectory of a company," said Scott Miller, CEO, Interstate Batteries. “Almost 30 year later, our brand has become a household name, our battery sales continue to increase and Joe Gibbs Racing absolutely had a hand in that. It is helping us ignite our future and become first choice in sustainable battery solutions."