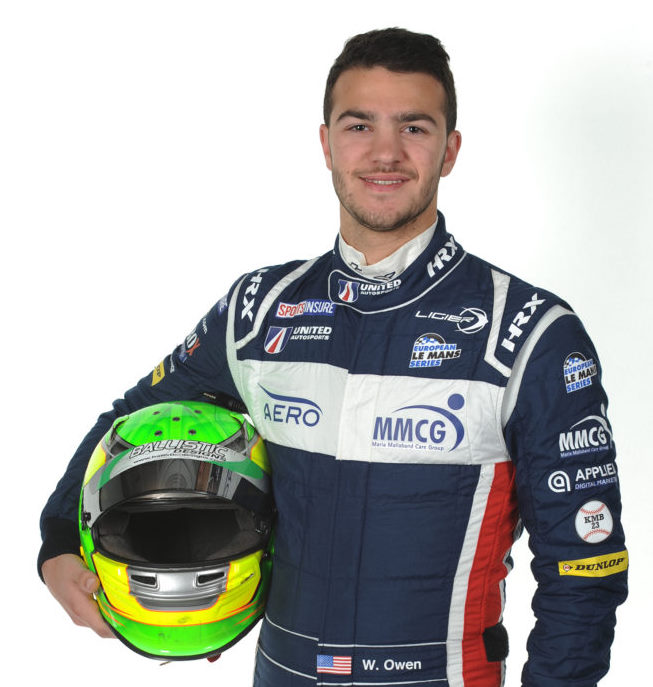 United Autosports announced that Will Owen will return to the team for the 2019 European Le Mans Series.

The American racer returns to United Autosports for his third season, racing alongside Alex Brundle and Ryan Cullen in a Ligier JS P217. Will first joined the team in 2017 as they made their LMP2 debut in the European series. After scoring two wins and three podiums Will, along with Hugo de Sadeleer and Filipe Albuquerque, finished second in the championship. Will also made his Le Mans 24 Hours debut the same year, finishing fourth in the LMP2 class.

In 2018, Will raced once again for United Autosports in the ELMS and at Le Mans. After a difficult start to their 2018 ELMS campaign, Will finished the season on a high with a podium at the final round. He was also part of United Autosports’ 2018 Le Mans 24 Hours podium finishing team, racing alongside Hugo de Sadeleer and former F1 driver Juan Pablo Montoya.

Will's 2019 ELMS program with United Autosports will run alongside his IMSA WeatherTech SportsCar Championship duties with Juncos Racing, where he has already raced at the Rolex 24 At Daytona – a race he contested with United Autosports in 2018 – and the Sebring 12 Hours. Due to Will’s IMSA racing commitments, he will be unable to race at the opening ELMS round at Paul Ricard.

United Autosports have now completed their 2019 European Le Mans Series driver line ups in both LMP2 and LMP3. Phil Hanson and Filipe Albuquerque will race the #22 Ligier JS P217, with Will, Alex Brundle and Ryan Cullen racing the #32. 2016 ELMS Champions Mike Guasch and Christian England will return to the LMP3 team in the #3 Ligier JS P3, while Tommy Erdos makes a return to racing, alongside Garett Grist and Wayne Boyd in the #2 Ligier JS P3. The 2019 season begins with the official prologue at Paul Ricard on 8-9 April, with the first round of the season held later that week on 12-14 April.

Will Owen, driver, United Autosports:
“I am excited to announce that I will return to Europe this year with United Autosports. I will be back in the #32 car, but this time with Ryan Cullen and Alex Brundle. I thought that I would have to wait a bit longer to be back with this fantastic team, but this opportunity came quickly. The chance to run in ELMS again with a fast line up of drivers and a competitive car is something I could never pass up. At the beginning of the year, I was not looking for other driving opportunities given my commitment with Juncos Racing, but after Daytona I realized again that any race laps I can get will continue to improve my pace and help me become the best driver I can be. Right now, I am more motivated than ever to put the time into that goal and re-joining a winning environment that I am comfortable with will provide more invaluable experience. I owe a big thanks to United Autosports and their sponsors. Without their help I could not have returned to this program so quickly. I am glad that our past work together has helped open this door. I will miss the first race which conflicts with Long Beach, but after that I will be all in for the last five rounds of ELMS."

Zak Brown, Team Owner and Chairman, United Autosports:
“It’s great to have completed our driver line ups for 2019 and signing Will is a great addition once again to the team. We have four very strong line ups in the ELMS this year so podiums, wins and championships is our aim."

Richard Dean, Team Owner and Managing Director, United Autosports:
“I’m so pleased that Will is going to be returning to the team for the 2019 season. After two successful and thoroughly enjoyable seasons, we all thought Portimao in 2018 was going to be Will’s final race with United, so it was great to go out with a podium there. We have kept in touch over the winter and this surprise opportunity to work out a deal for 2019 came quite late, however it feels like one of those ‘meant-to-be’ moments. Will is a race winner in LMP2, a podium finisher at the Le Mans 24 Hours and he and his family are great people to have as part of our team – everyone was delighted when I told them they would be returning. I am confident that along with Alex and Ryan this car will be fighting for podiums throughout the year."