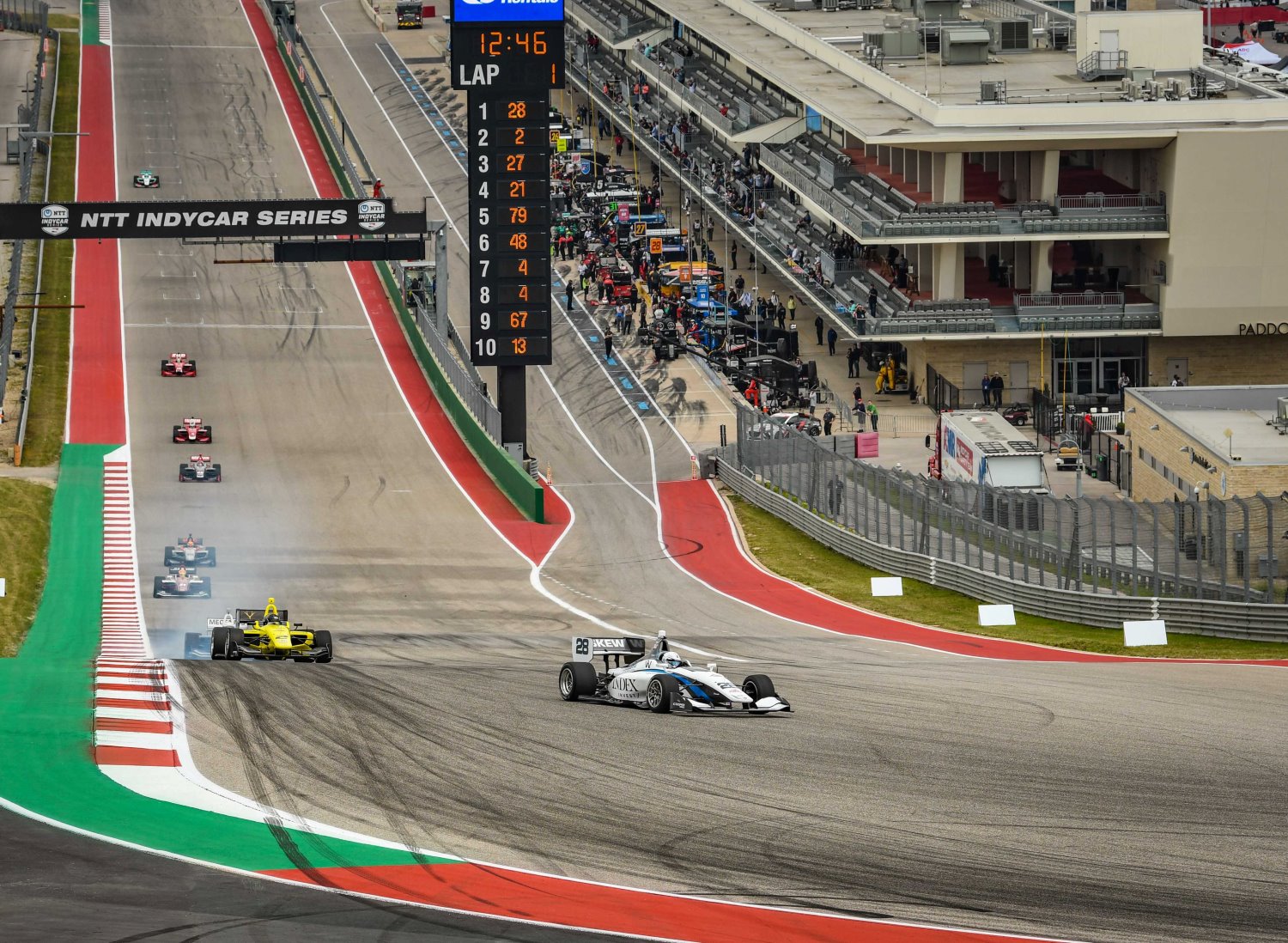 Oliver Askew put an exclamation point on his weekend at Circuit of The Americas this morning by claiming his second race win in as many days and taking over the lead in the Indy Lights Presented by Cooper Tires title-chase after four of 18 races. Askew, 22, from Jupiter, Fla., took the checkered flag in the Cooper Tires Indy Lights Grand Prix Presented by Allied Building Products just over two seconds clear of Andretti Autosport teammate Robert Megennis, from New York, N.Y., to ensure a perfect weekend sweep of two pole positions, two race wins and a maximum possible 64 championship points.

David Malukas, from Chicago, Ill., completed the podium for BN Racing, finishing mere inches behind Megennis after starting from the 10th and final position on the starting grid.

Askew made a fine jump on the start to lead the field uphill toward Turn One, only to leave an inviting gap on the inside line toward the end of the braking area, which Megennis immediately filled. Behind, Toby Sowery (BN Racing/Team Pelfrey), from Cambridge, England, accelerated hard from fifth on the grid to draw alongside second-row qualifier Rinus VeeKay (Juncos Racing), from Hoofddorp, Netherlands, while Canadian Dalton Kellett also made a bold move into Turn One, diving to the inside shortly before the apex and briefly nosing into third place – from seventh on the grid – before running wide at the exit and immediately slipping back a few positions.

The two Andretti cars of Megennis and Askew were chased in the early stages by Sowery, with the third Andretti Dallara-AER of Ryan Norman, from Aurora, Ohio, holding down fourth place but under pressure from VeeKay and the two Belardi Auto Racing cars of Canadian Zachary Claman and Frenchman Julien Falchero.

After being content to shadow Megennis for the first few laps, Askew took full advantage of the AER turbo engine’s push-to-pass feature, which grants an instant additional 50 horsepower, to pull alongside on the long back straight, then regain the advantage under braking for Turn 12. It was a perfectly executed maneuver.

Megennis stayed close for a few laps before Askew managed to make a clear break during the middle stages of the 20-lap race. But just when it looked as though Askew was about to take total control, the full-course yellow flags were waved after Claman’s car ground to a halt just off the racing line at the exit of Turn 15 with a broken driveshaft.

Remarkably quick work by the AMR INDYCAR Safety Team enabled Race Control to call a restart after less than one full lap of yellow and ensure a four-lap dash to the checkered flag.

Once again Askew was up for the challenge. He pulled out just over a second over Megennis on the first lap back to green, then drove three more consistently quick laps to secure his weekend sweep.

Malukas was the man on the move in the late stages. After being careful not to over-work his Cooper tires – and conserve his quota of 20 push-to-pass usages – in the early laps, Malukas worked his way steadily from eighth to fourth between laps 10 and 15, then took advantage of a slight slip by teammate Sowery at the restart to jump into third. He placed fellow teenager Megennis under intense pressure in the final couple of laps but Megennis held his nerve to claim his second podium finish in as many days. Malukas was still delighted to earn his first podium visit and claim the Tilton Hard Charger Award.

A gear-shift problem soon after the restart cost Sowery several places and allowed VeeKay, who had slipped as low as seventh, to reclaim fourth at the finish ahead of Falchero and a recovering but disappointed Sowery.

The next two Indy Lights Presented by Cooper Tires races will take place at the Indianapolis Grand Prix road course on May 10-11.

Oliver Askew (#28 Index Invest Dallara-Andretti Autosport Dallara-AER IL-15): “Hopefully this sets the tone for the rest of the year. It was an awesome race. It is always fun when you have to work for it and pass the other car. Congrats to my teammate Robert Megennis for finishing second. I can’t thank enough everyone on this Index Invest car and everybody at Andretti Autosport and everyone watching as well. Thank you."

Robert Megennis (#27 Cybersecurity Dallara-Andretti Autosport Dallara-AER IL-15): “It was a great race. I had a great start and got a draft from Oliver going into Turn One and made the pass on the inside and made it stick. I led the first five or six laps and pushed as hard as I could and then Oliver got by. I am happy with second place and holding off David after the restart was great."

David Malukas (#79 HMD Trucking-BN Racing Dallara-AER IL-15): “I started last and made a couple of passes. From there I was out of push-to-pass range and I thought I am going to try some strategy. I have a lot of laps (remaining) and I have to think of something. I called [team principal] Bryn [Nuttall] on the radio and asked him to tell me when people were running out of push-to-pass, and I’ll save my tires until then, and when they run out, I will be able to catch up with them. As soon as he gave me the call, I pushed for two laps and was already there. I had the push-to-pass and once I went for the passes, it was easy sailing. I saved my tires and had a lot more traction then the next guy. Even though I won in Indy Pro 2000, nothing compares to this – proper racing and going from last to third is something special."