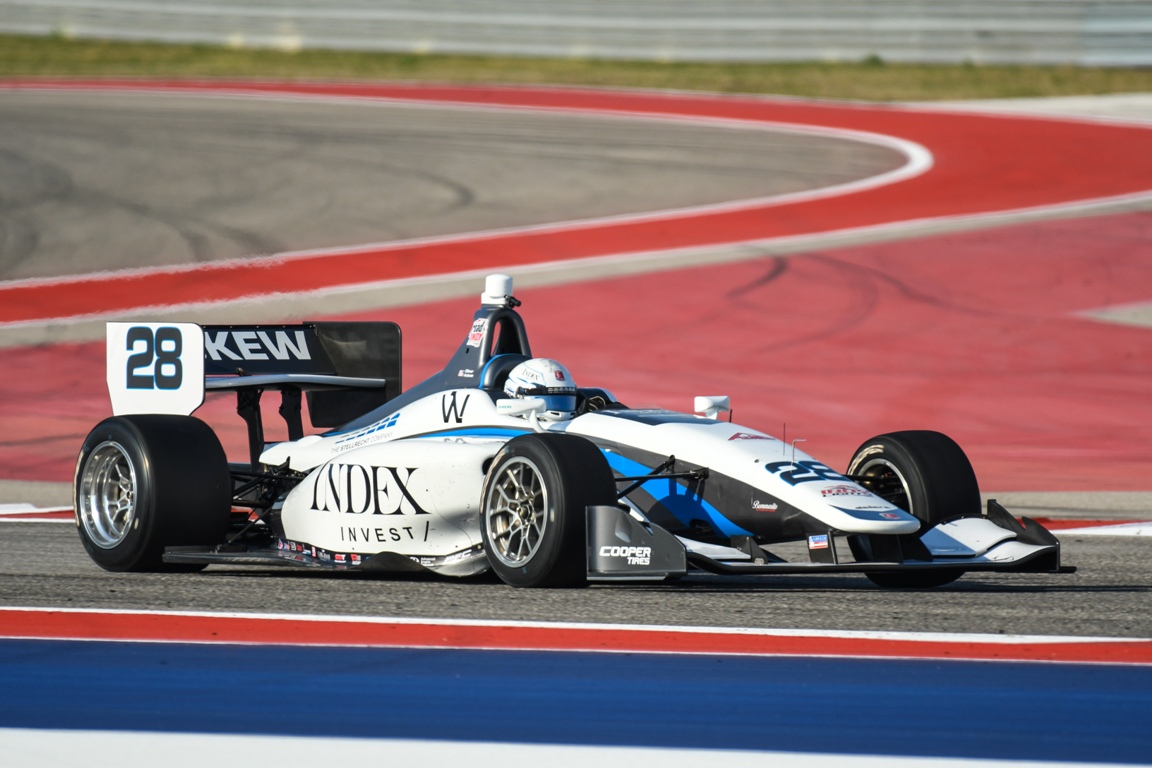 AUSTIN, Texas – Rising American star Oliver Askew set a blistering pace today and will start on pole position for tomorrow’s Cooper Tires Indy Lights Grand Prix Presented by Allied Building Products at the 3.41-mile, 20-turn Circuit of The Americas. The talented rookie from Jupiter, Fla., found the perfect way to bounce back from a major disappointment in the second of two Indy Lights Presented by Cooper Tires races two weeks ago on the streets of St. Petersburg, Fla., where he once again started from the pole, only to be eliminated in an incident on the first lap.

Askew’s Andretti Autosport teammates Ryan Norman, from Aurora, Ohio, and Robert Megennis, from New York, N.Y., ensured an excellent day for the Indianapolis-based team by claiming the next two positions on the starting grid.

Askew, who won the Cooper Tires USF2000 Championship in 2017 and finished third in last year’s Indy Pro 2000 Championship Presented by Cooper Tires, set the tone last month when he posted the fastest time during a pre-season test at Circuit of The Americas. Track conditions were significantly warmer today, resulting in slower lap times, but Askew continued to display his affinity for the challenging road course by posting the fastest time in practice this morning at 1:56.3844.

Englishman Toby Sowery was a remarkable second-fastest this morning. He is the only driver in the field not to have tested at the track in February, and ended the opening session just two-tenths of a second adrift of Askew’s best.

Lap times were faster this afternoon during the 30-minute qualifying session as more rubber was laid down, with Askew setting the standard at 1:55.5454, an average speed of 106.244 mph.

“I am extremely happy," said Askew. “It is nice to bounce back from the unfortunate race in St. Pete and move forward and put that behind us now. We’ve been quickest in almost all the sessions besides one (including the pre-season test) and this says a lot about the team and everyone here. We’re one-two-three and I’m really happy about that and looking forward to a good race tomorrow. The track really suits me, especially when it is hot. When it is hot anywhere, I tend to be a little bit stronger with being super smooth on the (steering) wheel and the throttle as well so I am really happy to put the Index Invest #28 car on pole today."

Norman, who began his third season of Indy Lights as one of the favorites to scoop the championship – as well as a scholarship prize to guarantee entry into a minimum of three NTT IndyCar Series races in 2019, including the 104th Indianapolis 500 – will start second tomorrow on 1:56.0648. Norman, too, is looking to rebound from a disappointing weekend at St. Petersburg, where he managed only a sixth and a seventh-place finish.

Norman edged teammate Megennis by a scant 0.0185 of a second. Sowery continued his impressive form to take fourth on the grid, narrowly ahead of BN Racing teammate David Malukas, from Chicago, Ill., whose efforts this morning were cut short by a bent suspension.

Zachary Claman (Belardi Auto Racing) and Rinus VeeKay (Juncos Racing), who shared the race wins at St. Petersburg and arrived in Texas holding the top two positions in the championship points table, both experienced difficulties in qualifying this afternoon.

Claman, from Montreal, Que., Canada, ground to a halt on his very first lap with an apparent fuel-feed problem, so will start last in tomorrow’s race, while VeeKay, last year’s winner of the Indy Pro 2000 championship, ended his session early after suffering a suspension issue. VeeKay will start sixth for the first of two races this weekend, for which the green flag will fly tomorrow, March 23, at 12:45 p.m.