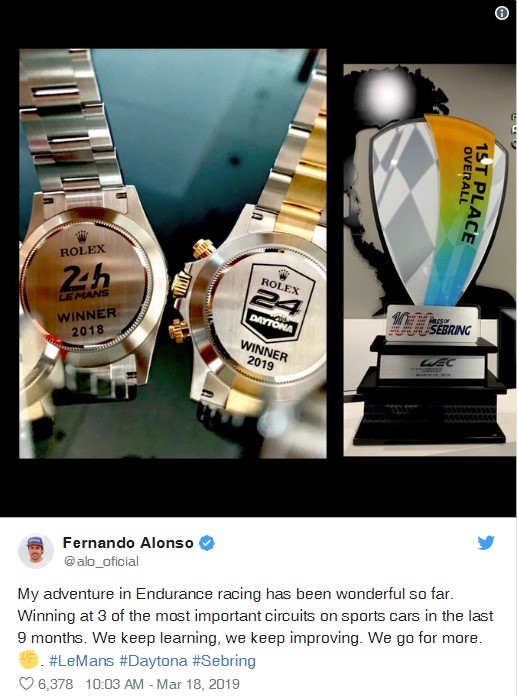 After a commanding victory at this weekend's World Endurance Championship (WEC) 1,000 Miles of Sebring, Fernando Alonso took to social media to rub it into the noses of the F1 crowd – underscoring what he can do in a competitive car. The last 9 months have included victories at the 2018 24 Hours of Le Mans, 2019 Rolex 24 at Daytona, and 1000 Miles of Sebring WEC race.

The photos shared to Alonso's Instagram and Twitter featured the two Rolex Daytona timepieces the Spaniard earned by emerging victorious at Le Mans and Daytona, in addition to the WEC trophy from Sebring. In a nutshell, the image represents Alonso's supremacy at what many consider to be three of the most challenging endurance races in the world.

"My adventure in endurance racing has been wonderful so far," said Alonso on social media. "Winning at three of the most important circuits on sports cars in the last nine months. We keep learning, we keep improving. We go for more."

Up next – his face on the Borg Warner trophy.