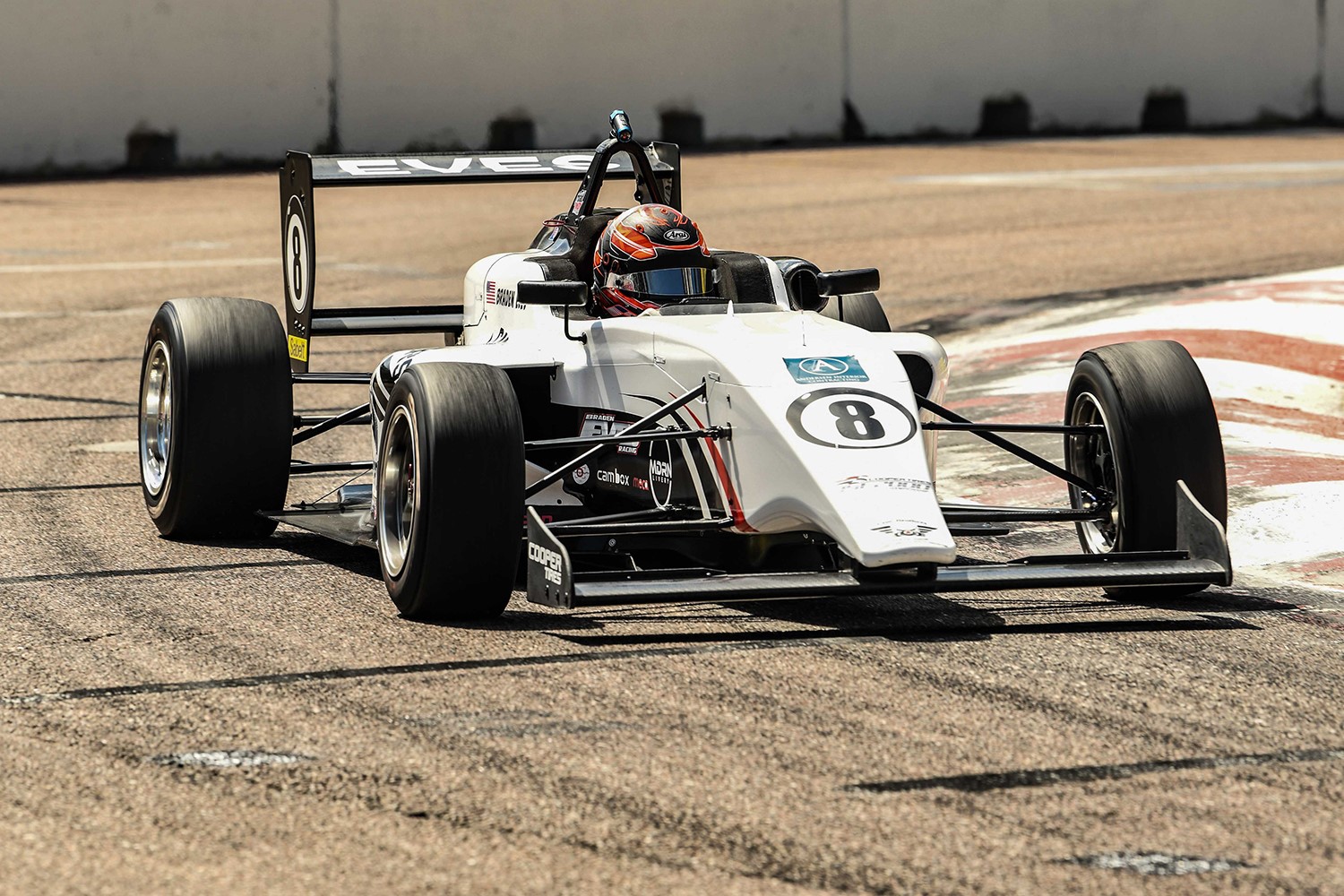 Cape Motorsports has won the last eight straight Cooper Tires USF2000 Championship title and they once again fired up their defense at the season-opening Grand Prix of St. Petersburg in Florida. The first doubleheader of the season was held last weekend (March 8-10) on the 1.8-mile, 14-turn temporary circuit that utilizes part of the city’s Alfred Whitted Airport, and all three of Cape Motorsport’s 2019 drivers were impressive.

The team swept both pole positions, as new recruits Braden Eves and Darren Keane topped the two qualifying sessions, and the team won both main events with Eves dominating the top step of the podium. Keane recovered from a faulty transponder in Race 1 qualifying to storm from 19th to seventh on Friday, and then led all but one lap in Race 2 before a slight miscue in the final corner ended in a spin and contact that resulted in a DNF.

Cape’s youngest driver – 14-year-old Reece Gold – delivered a mistake-free performance all weekend to post a pair of top-10 finishes that have positioned him in a tie with Keane for eighth in the championship standings. Eves leads the standings by 15 points heading into a two-month break before the next rounds of the series at the Indianapolis Motor Speedway in May.

“St. Petersburg is our home race and the first race of the year, so this was an outstanding team effort," commented Dominic and Nicholas Cape, the co-owners of the powerhouse team. "Everyone down the line worked their bollocks off. Two wins for Braden – what a fantastic start to the season. Darren was awesome in Race 1, coming through the field to finish seventh, then a great Race 2, controlling the field from the front with an unfortunate finish. And what can you say about Reece? He didn't put a foot wrong all weekend and strolls out of St Pete sitting in eighth place in the championship. We're really proud of how everyone has performed during the weekend. There is a lot of hard work in front of the team and we look forward to the many challenges the season will hold for us."

Eves began the weekend sitting fourth in the lone practice session on Thursday afternoon and then jumped to pole in qualifying for the opening race, turning the fastest time on his final circuit. The 19-year-old from Gahanna, Ohio led flag-to-flag through three restarts to win in his USF2000 debut on Friday. On Saturday, Eves started second in Race 2 was running third when Keane spun in Turn 14 on the final circuit, eliminating Christian Rasmussen in the process. Eves cashed in on the opportunity to score his second win of the weekend, taking the commanding point lead in the process.

While the overall weekend result did not meet Keane’s target, the 19-year-old was the fastest driver throughout the entire event. The Boca Raton, Florida resident was quickest in practice and would have challenged for pole position in Race 1 qualifying if not for a fluke transponder issue. Darren started 19th in Race 1 and attacked with precision, making only high percentage passes as he took advantage of the three full course yellows. The second-year driver took seventh in the final tally, and earned a bonus point for fast lap of the race. Keane qualified on the pole and led all but one lap of the race as he just barely lost the rear of his car in the final corner of the final lap as he was defending from an attack from behind. The resultant spin left him in 14th, and he is now eighth in the championship standings heading into the month of May in Indianapolis. Darren’s first USF2000 race win is just around the corner.

The youngest driver in the Cape camp for 2019 is Reece Gold, the 2019 Lucas Oil Formula Race Series champion. Gold has extensive karting experience, and his move to open wheel formula cars has been impressive. The Puerto Rico resident became more comfortable with the St. Petersburg street circuit with every session, qualifying 11th and 14th for the two races. Staying out of trouble and running consistent lap times are key to success for rookies in the opening rounds of the USF2000 program, and Gold was impressive all weekend, finishing 10th on Friday and eighth on Saturday, never putting a wheel wrong.

Cape Motorsports and its driver trio now have two months off until their next Road To Indy Presented by Cooper Tires event on the Indianapolis Motor Speedway road course on May 9-11.

Driver Quote: “St Pete did not end the way we wanted, but there are many positives to the weekend. I was one of the fastest drivers on the track and, on top of that, I got my first pole in the series. In Race 1, I was able to salvage some good points coming from the back of the field to 7th. In Race 2, I showed what I’m capable of and led the whole race aside from my mistake on the last lap. It was a heartbreaking couple of hours after the race on Saturday, but my mind is clear now and I’m more focused than ever heading into Indy. Huge thanks to everyone at Cape Motorsports, I can’t wait to continue working with them in two months. Also, I want to offer a big thanks to Oswaldo Negri for all of his expertise throughout the weekend."

Driver Quote: ““Overall, it was a good weekend. It being my first race at such a difficult track, my main goal was to finish and we accomplished that with two top-10s. Racing on a street course was hard at first, with the walls so close. But as the weekend went on, I gained the confidence to push harder. Being part of the Road to Indy is awesome. All the exposure and the different things they have for you to do are great. Racing alongside IndyCar and seeing all the major teams was cool and it lets you visualize your goals. Now I’m looking forward to Indy, to where I hope we can continue moving up the field."

Driver Quote: “This past weekend in St Petersburg was the best start that we could’ve hoped for this season. I’m always getting more and more comfortable with the car, being in my rookie season. I went in looking for good points and I came out with a large point lead, now I need to put my head down and focus onwards towards the next race and the rest of the season. As always