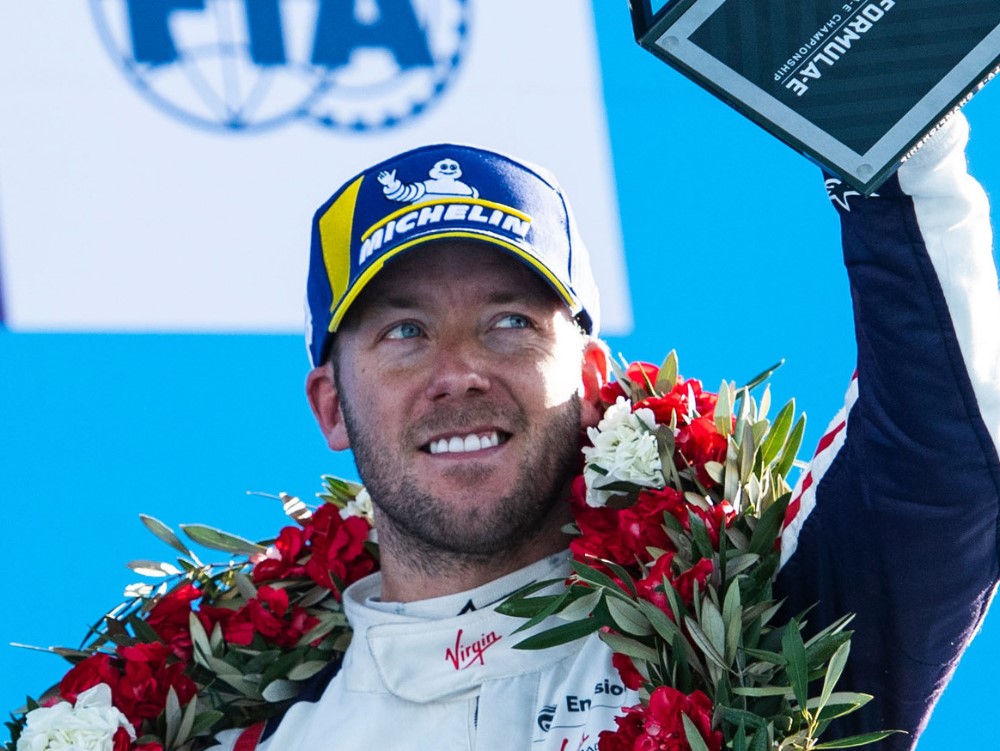 UPDATE Marking the 50th race of the ABB FIA Formula E Championship's short history was never going to be easy but another scrappy street race in downtown Hong Kong saw the series celebrate with the usual hefty dose of unpredictability. With a dramatic dogfight between DS Techeetah's Andre Lotterer and Envision Virgin Racing's Sam Bird as the centerpiece, the series' half century turned out to be the first officially wet race in the Championship's history, which saw Sam Bird stripped of his stolen victory after failing post-race inspection and Venturi's Edoardo Mortara rise as the most unlikely underdog victor on Hong Kong's iconic Harborfront.

In one of the scrappiest street battles on record, which saw a total of eight drivers retire, the landmark 50th E-Prix was characterized by a dramatic dogfight between DS Techeetah driver Andre Lotterer and Brit Envision Virgin Racing driver Sam Bird. In the final moments of the race, Bird was chasing down race leader Lotterer when he made contact with the back of his car, breaking his rear suspension and puncturing his tyre. After sustaining the damage, Lotterer limped home nursing his stricken car and failed to finish the race, while he witnessed what looked to be a sure victory slip through his hands. "It's pretty sad, obviously. I thought it was going to be my race and he just used me to stop," said the disgruntled German moments after the returning to the pits.

"The race was fair up to that point but it is what you would call a disgusting move because it is not really the way we should race."

"I lost it thanks to him. Even if they disqualify him my race is done so honestly, it is just sad."

In the following hours, the FIA – motorsport's governing body – handed Bird a devastating blow in the form of a five-second penalty, which dropped him to sixth place in the race, handing the win to second place finisher Edoardo Mortara, second to Audi Sport Abt Schaeffler's Lucas di Grassi and third to Envision's Robin Frijns.

"The result today is fantastic. Fourth in Santiago, third in Mexico, now my first victory in Hong Kong!," said the Swiss-Italian Venturi driver, clearly ecstatic at his newfound victory.

"The race was awesome and I've had a wonderful weekend – historically, racing in Asia brings me so much luck – honestly, I’m over the moon and I couldn’t be happier.

"The team have done a brilliant job, they put in all the hours and pull out all the stops – this result is a tribute to their hard work."

After coming so close to a win in his Formula E debut in Hong Kong last season, both Mortara and the team's maiden victory must feel all the more significant. But despite the penalty, it's Bird who takes the lead in the drivers' championship, while his team also continues to lead despite having no manufacturer backing. With just two points separating the top four drivers, the Championship title could still fall to anyone.

03/10/19 Following a furious battle for first, British driver Sam Bird clinched the win here in Hong Kong as Formula E celebrated its landmark 50th race. In second came Venturi's Edoardo Mortara with Audi Sport Abt Schaeffler's Lucas di Grassi in third, while a furious Andre Lotterer was left stranded on track after being losing the win in the dying moments of the race.

Here's how the race unfolded…

Nissan e.dams' Oliver Rowland took the lead off the line as the pack made it around Turn 1 and through the chicane, leaving Poleman Stoffel Vandoorne (HWA Racelab) in second until Envision Virgin Racing's Sam Bird, who'd fought through the pack, took his position.

Just minutes in, the race came under a full course yellow as Geox Dragon's Filipe Nasr's damaged car carried on into the wall on Turn 2, with both Mahindra Racing's Jerome d'Ambrosio and Pascal Wehrlein then colliding with the stricken car, ending all three drivers races within the first five minutes. Under the Safety Car, the pack regrouped until the race was temporarily stopped under a red flag while the cars were salvaged. After the incident was cleared, 13minutes were added to the clock to make up for the lost time under the red flag.

Out of Turn 1, Rowland fell to 10th when his car slowed, handing Bird the lead with an aggressive Andre Lotterer behind. Seconds later, Lotterer exploited Bird's wide line around Turn 2, slipping into the lead.

Further down the pack, Vandoorne in third was holding back Venturi's Edoardo Mortara in fourth, eager to relive the podium finish he had in Hong Kong last season.

At the front, Bird was biding his time behind Lotterer, keeping close on his tail while the German held the lead. Heading into Turn 2, the British driver made a move, passing Lotterer before the German reclaimed his lead through the chicane. Neck and neck, the two battled hard for the top step of the podium.

With less than 18 minutes left, Vandoorne stopped on track suffering a technical failure while Nissan e.dams' Sebastien Buemi picked up damage to his front, left wheel through the chicane, ending his race early. With the Safety Car deployed, Vandoorne was recovered.

The race restarted with 11 minutes left to go, with Lotterer still in the lead, Bird close behind in second and Mortara in third. The Swiss-Italian driver has good memories here in Hong Kong after leading much of the race and securing a podium on his Formula E debut last season.

Further down the pack, Rowland stopped on track after snapping his rear axel following contact with the wall. With the Safety Car deployed, Rowland's wreck was cleared and the race restarted with less than two minutes to go.

Chipping away at the German race leader, Brit driver Bird made contact with the back of Lotterer's car, puncturing the tyre, leaving him helpless as the car limped home, unable to finish with smoke pouring out the back. While Bird sailed over the finish line to take the win. Behind Bird came Mortara in second and di Grassi in third. With the race finished, Bird came under investigation following the incident with Lotterer, with the result yet to be decided.

Daniel Abt completed the top five in the second Audi while Felipe Massa backed-up a double points finish for Venturi by finishing in sixth position.

Battling from 17th on the grid following a difficult qualifying, Mitch Evans secured points for Jaguar Racing by finishing in seventh place while Gary Paffett secured his maiden points in the championship in eighth.

Jose Maria Lopez was GEOX Dragon's sole finisher in 11th, missing out on points while Tom Dillmann was 12th in the second NIO.

Jean-Eric Vergne's season of woe continued in Hong Kong with the DS Techeetah driver failing to finish inside the top 10 for the third race in succession, with the driver finishing in a disappointing 13th place after being handed a five-second time penalty for causing a collision with Dillmann.

Lotterer was the final classified finisher in 14th following his puncture, with the Hong Kong E-Prix seeing a high number of retirements, with both Nissan e.dams drivers failing to see the checkered flag while Vandoorne suffered from a driveshaft failure.

Mahindra Racing experienced a double DNF in Hong Kong, with neither Pascal Wehrlein nor Jerome d'Ambrosio seeing the checkered flag after the pair were caught up in an accident with Felipe Nasr which ultimately brought out an early red flag.