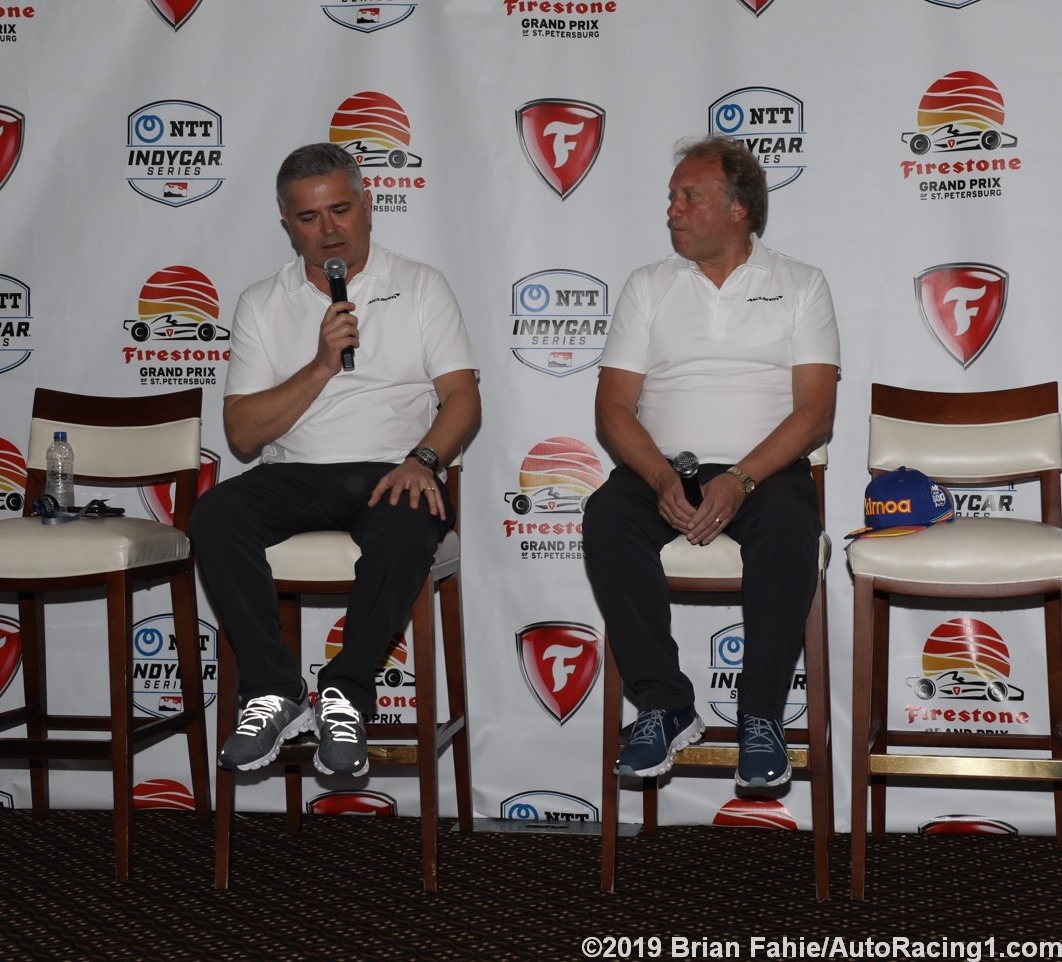 Bob, I'll start with you. I know you're building the technical side of the team as you build up to your run at the Indianapolis 500. What has been going on with that program in building that technical side? What steps have you made so far to get ready for May?

BOB FERNLEY: I think the first thing to do as McLaren coming into Indy for the first time for some years, we want to build a good base knowledge of what we're doing. We put one chassis over McLaren so we can bring that forward and understand what's going on. This car will be used for the main NTT IndyCar Series program. The test chassis that we would use at the two track tests that we do is being built by Carlin in Florida.

We're looking at supervising both of them but fundamentally split the resources in order to make sure we can deliver by the end of March.

THE MODERATOR: I'm sure there's so many moving pieces, different development programs in that.

Gil, you were involved in the 2017 effort when Fernando Alonso raced the Indianapolis 500. What has grown and developed in the program since 2017?

GIL de FERRAN: I think as Bob alluded to, this is very much a McLaren effort. Bob has been tasked to pulling everything into place, hiring people, schedules, so on and so forth. He's doing a great job on that, by the way.

I think we managed to put a good group of people together. Trying to bring all the resources and the knowledge that we have to bear in a short period of time. As far as I'm concerned, I'm trying to help Bob as much as I can, not only because of my know-how about Indy car racing but also trying to, how do you say, coordinator the whole McLaren Racing effort to try to help us become as competitive as we can be in this year's Indy 500.

THE MODERATOR: Bob, you have so much experience through your different roles throughout the years. How valuable is having that input from Gil into the team and its efforts?

BOB FERNLEY: I think you can never underestimate it. Gil's experience is great. Whilst I have a reasonable amount of experience myself with respect to the Indy 500, it's a little bit outdated. To be able to have Gil to rely on, to lean on, to be able to get the extra support that we need, is absolutely invaluable.

Q. Did you identify Carlin as the team you wanted to partner with early on? Did you look at Ed Carpenter, some other Chevy teams?
GIL de FERRAN: I think they were always in the cards. Obviously, as McLaren has known Carlin for many years, in different ways a lot of actual individual personal relationships across the two teams, I think it was a good fit.

I think, Bob, if you want to expand a little bit more how we're working together, I think that might be appropriate.

BOB FERNLEY: For us, it's worked really, really well. As Gil says, we have a history with Carlin. It makes it very easy for us to work with them. Our systems are very similar in the way we operate. Again, we can integrate the programs much easier. It was a good fit for us.

We need that little bit of safety blanket. When you come in as a new team, there's always bits and pieces you have forgotten, haven't got on top of, you need the guidance. The good thing with Carlin is they've gone through it the year before. It gives us a good platform to work with.

GIL de FERRAN: I think 'humility' is the word. We don't know what we don't know. Having that little bit of experience, somebody that has been running in the series full-time, it's always welcome.

Q. Bob, what are we going to see from McLaren next year? A full entry? Possibly a double entry for the Indy 500? Gil, does Fernando have any plans about doing more than just the 500 this year in IndyCar?
GIL de FERRAN: Look, I think in general it's too early to speculate what lies beyond the Indianapolis 500. All of our efforts are just to do the best job we can for the 500. I mean, it's no secret that we continue to evaluate a deeper involvement as McLaren in IndyCar racing. But I have nothing really to comment about that at this point.

BOB FERNLEY: I think obviously I echo Gil completely. The focus for me is simply doing a good job at the Indy 500. Once we do that, the shareholders will see everything and decide where they want to go.

Q. For this year, for the 500, is there any thought of running a second car?
BOB FERNLEY: I'm having enough difficulty doing one car (laughter). No, there's absolutely no interest whatsoever in doing a second car.

THE MODERATOR: Gentlemen, thank you very much. We appreciate your time today.

GIL de FERRAN: Great to be here. Good to see you all.