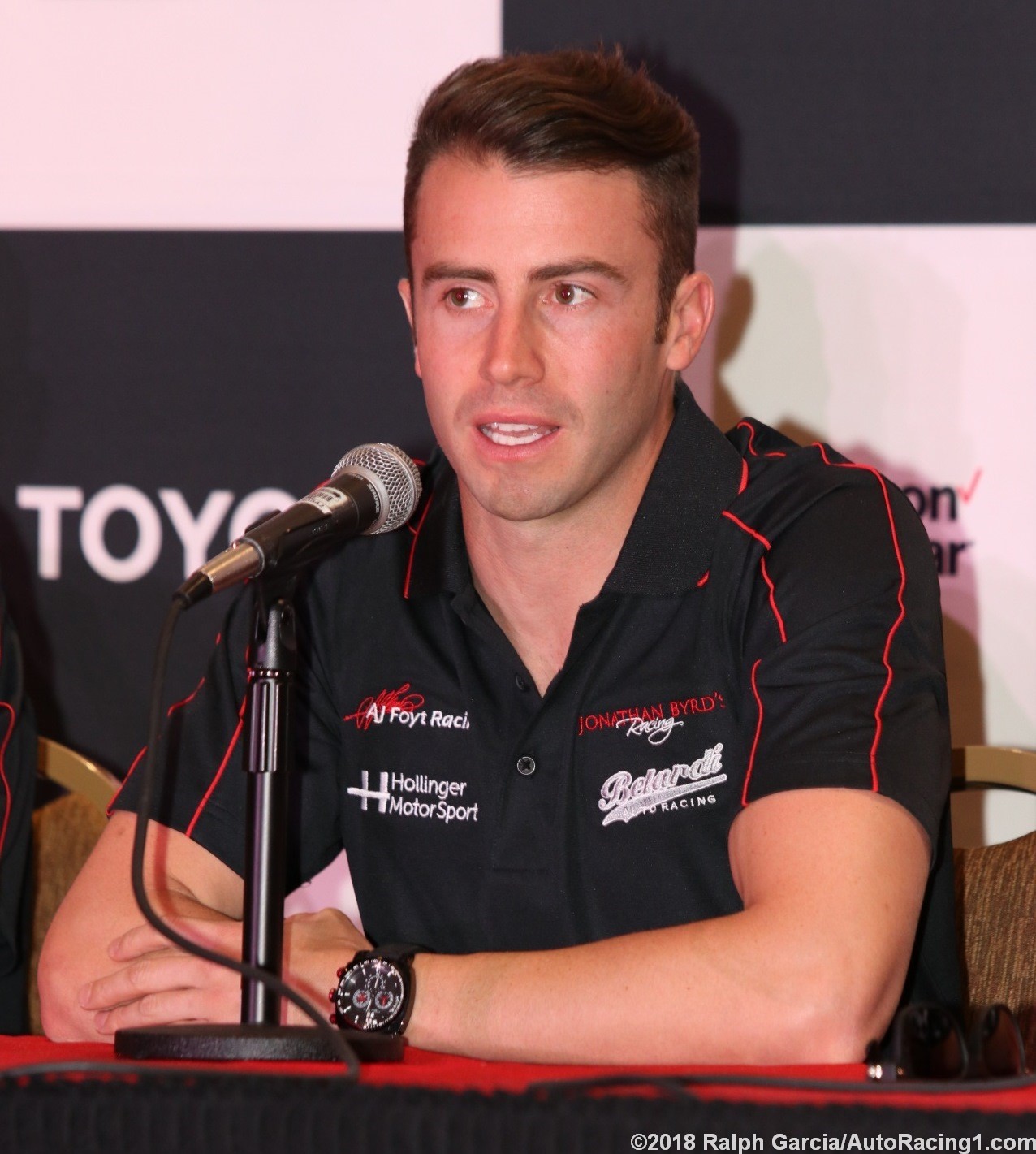 UPDATE Added a short video below of a discussion we had with Davison and the team after the announcement.

James Davison will be making a return to Dale Coyne Racing for the 103rd running of the Indianapolis 500 in May as the team partners with Jonathan Byrd’s Racing, Hollinger MotorSport, and Belardi Auto Racing to run the #33 car for the Australian driver.

Davison last raced for the NTT IndyCar Series team at the 2017 Indianapolis 500 as a replacement driver for Sebastien Bourdais who was out with injuries at the time. In that event, Davison ran amongst the lead pack, led two laps along the way and was running fifth before, unfortunately, being involved in a multi-car incident. The 32-year-old driver has four starts at the famed Indianapolis Motor Speedway including two with DCR.

“I’m enraptured to be rejoining Dale Coyne Racing with Byrd Hollinger Belardi," expressed Davison. “Dale’s team is special in many ways and I have fond memories driving the #18 and #19 cars at the 500 in the past. We endeavor to recreate our prior success together and can’t wait to get after it."

“We’re very excited to have James (Davison) come back to the team for the Indianapolis 500," said Team Owner Dale Coyne. “He stepped in last minute for us with hardly any practice as a substitute driver to Sebastien (Bourdais) a couple of years ago and did a great job under the circumstances and showed he has the speed to run with the best of them. We’re also happy to be partnering once again with the Byrd family who have a long history with the Indy 500, as well as Hollinger MotorSport, and we look forward to working with Brian Belardi and his team."

Davison is not the only one making a return with the Dale Coyne team, Jonathan Byrd’s Racing last partnered up with the Plainfield, Illinois-based squad in 2016 as the primary sponsor on its #18 car and also ran an Indy-only entry for the late Bryan Clauson.

“It was only a matter of time before we formed a partnership with Dale Coyne Racing for the Indianapolis 500 this year," shared David Byrd, one of the principals of Jonathan Byrd’s Racing. “We’re all connected in one way or another. Both the Byrd family and James have a history with Dale and his team and last year James, Brad (Hollinger) and I partnered with Belardi Auto Racing, so this year’s deal came together very naturally. Dale’s team has had strong runs at the Indianapolis Motor Speedway the last couple of years and we hope to continue that with them."

Although they’ve made numerous appearances at the Indianapolis Motor Speedway for the Indy Lights Series’ Freedom 100, this will mark only the second time that Belardi Auto Racing fields a co-entry for the Indianapolis 500, with their first one coming last season, also with Davison, Jonathan Byrd’s Racing and Hollinger MotorSport.

“I’m very happy to have Belardi Auto Racing once again part of the Indianapolis 500," said Team Owner Brian Belardi. “I’m especially excited to be partnering with Dale Coyne Racing, who not only have a lot of experience in IndyCar, but they’ve proven time and time again how competitive their cars are at the Speedway, and I believe that with the great group of partners we have and with James Davison behind the wheel we are setting ourselves up for a very successful month of May at Indianapolis."

THE MODERATOR: We are here to make a very special announcement regarding Dale Coyne Racing and a new Indianapolis 500 entry.

I'll hand it over to you, Dale, to make this really cool announcement.

DALE COYNE: Thank you. I think there's been 32 cars that have announced officially so far. We're happy to make it 33. We're happy to have an alliance this year, our third entry, our No. 33 car, going to be an entry of Dale Coyne Racing with Byrd-Hollinger-Belardi. Happy to have these guys onboard. It will be a good effort combined.

Our driver is going to be a driver that drove for us two years ago when Sebastien got hurt, could have won the race, James Davison. We're very pleased to announce the No. 33 car for the 33rd entry.

THE MODERATOR: James, you are an Indy 500 veteran at this point. What does it mean to you to be driving that car this year?

JAMES DAVISON: It means a lot. More than anything I means a lot to be back with Dale Coyne. It was a very tough year for the Byrd-Hollinger-Belardi partnership in 2018. We just did the best with the situation that we confronted. All along it was our intention to be with Dale Coyne Racing last year. That didn't come about.

In a way it's a year overdue for us. I've had success driving for Dale, for sure my best 500 outing, leading the race in 2017. Went down fighting, came up short like the majority of drivers do. Obviously for Jonathan Byrd Racing, they've had prior relationship with Dale themselves in 2016, have led laps of IndyCar races, as well.

We're very excited to have Brad Hollinger involved again, part of the Formula 1 team, and Brian Belardi. He's kind of the last of the Indy Lights teams to fully move up to IndyCar. This is obviously a way to just get a taste for it last year and this year again.

Like everyone that starts the race, we have high hopes and certainly the engineering group behind Dale Coyne Racing with Craig Hampson and Mike Cannon, who I've been fortunate to work with both in the past, driving the 18 and 19 cars in 2017 and '15, that's a big part of what is making Dale Coyne Racing a successful team.

Of course, they've been basically the top Honda in qualifying the last two years. Certainly looking to capitalize on that. Yeah, May can't come soon enough.

THE MODERATOR: Brian, speaking to the strength of Belardi Auto Racing, known in the Indy Lights series for many years, what does it say about the growth of the team to complete this partnership and make an entry for the Indy 500?

BRIAN BELARDI: I am very excited for it. David and James have been working on this for a couple of years. It finally came to fruition this year.

I think everybody knows that my end goal is to be an IndyCar team owner, so basically it's one step at a time for me. I think this is a fantastic step.

THE MODERATOR: Joined also by David Byrd. This relationship has existed for a while, but continues to grow and expand every year. Your thoughts on this entry and this announcement today.

DAVID BYRD: Coming back to run with Dale is like coming home. Feels like that very much. We had great success with our program in 2016. We were competitive, led laps. That was a first for a long time at Indy with our family's history there. Never been at the front of the field. To be able to do that, hopefully we can duplicate that.

Dale just has a very welcoming environment, always have been, himself, his wife. Everybody at the team, they're just so fantastic to work with. I'm glad we're announcing this a little bit earlier than last year, but still wish it wasn't two months away because I'm eager for it to get going.

Can't thank Dale enough to open the doors back to us. James has history there, we have history there. We are bringing Brian onboard again to be part of it. I think it's all shaping up very well for something special for this year and hopefully also for the future.

THE MODERATOR: James, as David mentioned, this is an early announcement. What does that do for your comfort level as a driver to know you have a goal and a target date in mind, you don't have to worry about setting up the arrangements to get there, you're there?

JAMES DAVISON: Obviously I've been in a very unique situation as an IndyCar driver doing the 500 where prior to last year I had done the race three times but only qualified for it once. I was finding out midway through the first week of practice and during the qualifying weekend that I would be in the race driving with Dale. Last year was a step in the right direction. Then this year even better again announcing it earlier.

Look, I think it's proven at the Speedway what team you have behind you is a big degree of your success there. Ultimately that's what gives me confidence, going in with Dale, that I've been able to move forward in the races within the past. I've always had a good car.

Yeah, with Craig Hampson steering the ship on the technical and engineering side, he's obviously one of the hottest properties in IndyCar. It's shown with the results the last two years.

The team is wanting to see the third car do well, as well, not just see that it's something that's going to drag away from the focus and resources of their primary cars. Like I said, I've worked with Mike Cannon and Craig Hampson driving the 18 and 19 cars. There's very good chemistry. I love that about Dale Coyne Racing. There's no cockiness, hostility in there, all that kind of stuff. It's the way a race team should be and something very refreshing to be a part of.

THE MODERATOR: Thank you so much for choosing to make this announcement with us here at the Firestone Grand Prix of St. Petersburg. Obviously some past success and recent success for Dale, yourself and your team here the last couple of seasons.