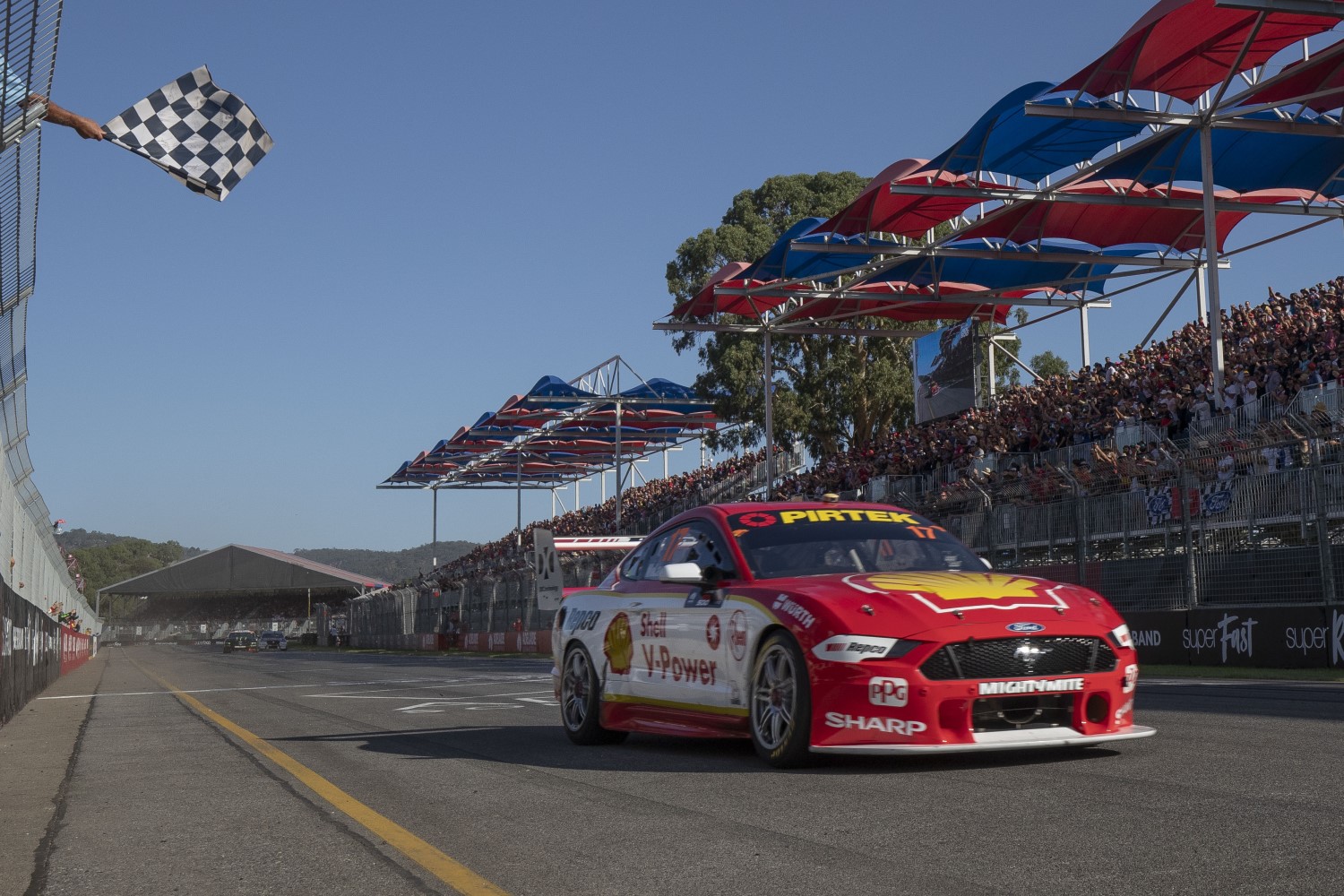 Youngster Cameron Waters announced himself on Supercars big stage even though he was second to the unstoppable Scott McLaughlin in the Superloop Adelaide 500.

McLaughlin was, for the second day running, in a league of his own but it was 24-year-old Waters who grabbed a podium after the heartbreak of being ripped out of race one by a cool suit failure.

Waters won the Sandown 500 two years ago with Richie Stanaway, finishing eighth in the Championship that year. Now in a new Monster Energy Ford Mustang, Waters was amongst the best performers in the opening weekend of the Supercars season.

He raced with a fast-finishing Shane van Gisbergen in the closing laps on old tires against fresh rubber for the Red Bull Holden, keeping the 2016 Champion behind him in a tense final five minutes.

“It felt like redemption from yesterday. It’s good to be getting a trophy again," Waters said. “I looked in the mirror a couple of times but I knew where I was strong. I knew I had it covered, I am just glad I got it done."

Until McLaughlin’s domination at this event Van Gisbergen had won this race four times in a row.

McLaughlin’s two wins repeated the effort of Van Gisbergen who last season introduced the ZB Commodore with a set of wins in Adelaide.
“We brought our little pony to the field, took on a couple of German machines and had a bit of fun. It has been unreal for Ford Performance and everyone in North America," McLaughlin said.

“I am sure Roger (Penske) and all those people are watching at home, this is proud moment for our whole team. For us to win two on debut is really cool."

A mid-race pit lane skirmish added to the intrigue with double-stacking from a safety car helping McLaughlin, Waters and Van Gisbergen to skip ahead.

Jamie Whincup had been trading blows with McLaughlin but pitted early to avoid double stacking, only to be the victim of just that when the safety car was called for Jack Le Broq.

During the melee Rick Kelly plowed into chaz Mostert, sending him sideways and temporarily blocking the entire lane.
It was a result of Mostert being locked in by Fabian Coulthard when the field pitted. Mostert’s team pulled him backwards to get around, releasing him straight into the path of Kelly.

It capped a horror weekend for Mostert who was one of the fastest cars on track. Mistakes in the first race cost him a potential podium and a kerb hop penalty dropped him from a top of the grid start to ninth in the Sunday race.

Brad Jones Racing grabbed fourth and fifth with South Aussies Tim Slade and Percat, the pair running in close company on the run home.
Mark Winterbottom started at the rear of the field due to a power-steering failure in ARMOR ALL qualifying, but made his way through to sixth.

Todd Hazelwood grabbed 10th, the Matt Stone Racing driver's best Supercars result coming on the same day he made an ARMOR ALL Top 10 Shootout for the first time.

Supercars next round is the Beaurepaires Melbourne 400 as part of the Formula 1 Rolex Australian Grand Prix from 14-17th of March.

"It was fantastic to have the team from Ford Performance and Ford Australia here this weekend, and great to share the podium with Mark Rushbrook. We also had Jonathan Gibson from Team Penske here, so it's been a really big weekend. It's massive for the sport, and massive for our team. It's been an awesome weekend. We had to work for it, and we ended up having the perfect day today, and an awesome start to the season. I'm stoked."