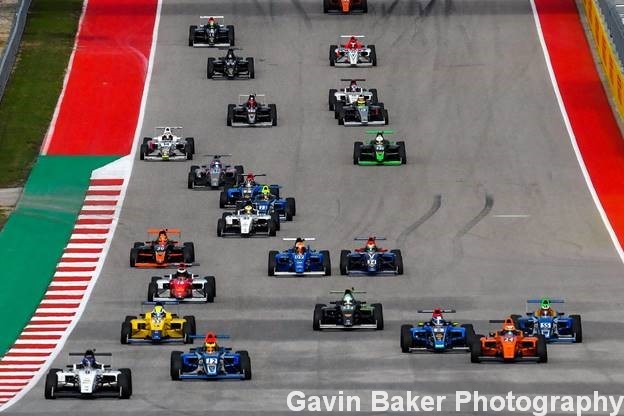 In 2018, Formula 4 United States Championship Powered by Honda maintained the largest F4 field in the world, averaging 31 Ligier JS F4 cars for the 17-race season. With teams like Alliance Racing Sponsored by Gas Monkey Energy Drink, DEForce Racing and Jay Howard Driver Development all expanding their F4 efforts for 2019 and the Formula Pro USA F4 West Coast filtering in new drivers, the field for the season opener at Road Atlanta (April 18-20) is on track to surpass last year’s record-breaking season.

“The excitement from our great 2018 season has carried over to 2019. We are looking at topping our 2018 end-of-season projections," said SCCA Pro Racing General Manager Sydney Davis-Yagel. “With a championship scholarship that’s valued at $230,000 to progress into the F3 Americas and the potential to earn FIA Super License Points it’s no surprise we’ve sold over 70 cars on both the east and west coasts. The Ligier, Honda/HPD package is a proven product that continues to embrace the low-cost values of our series, both in purchase price and ultimately the cost to compete."

"I'm delighted to confirm my plans with Velocity Racing Development for the upcoming 2019 F4 United States Championship," said Clarke, who is the ninth F4 U.S. veteran to confirm his championship contention. "Our showing together in COTA certainly proved to me that I didn't want to be anywhere else for my second season. With VRD comes a lot of experience in Daniel Mitchell and the team is currently going from strength to strength. I'm confident that our previous relationship will help us challenge at the front for race wins."

Clarke and the rest of the burgeoning F4 U.S. field will visit six prestigious road courses across the United States this year, supporting premier championships like F3 Americas, NASCAR Xfinity Series and Formula 1. The top-seven drivers in the overall championship earn FIA Super License Points to advance their racing careers. For more information on the F4 U.S. teams, drivers or the championship, visit F4USChampionship.com.

FIA F4 is designed as entry-level open-wheel racing for participants, around a contemporary, modern, cost conscious formula. SCCA Pro Racing and its chosen partners that embrace these ideals and support this vision with appropriate technology and products. The selected F4 powerplant is a production-based engine powering the Honda CivicÂ® Type RÂ®, tuned to meet FIA-mandated output of approximately 160 Hp. The engine and the ECU are sealed to provide parity and compliance. The Ligier JS F4 16 carbon fiber chassis is manufactured in the United States. From the Hankook Tires, the Honda engine to the Ligier chassis, the F4 U.S. car is assembled and made in the United States.