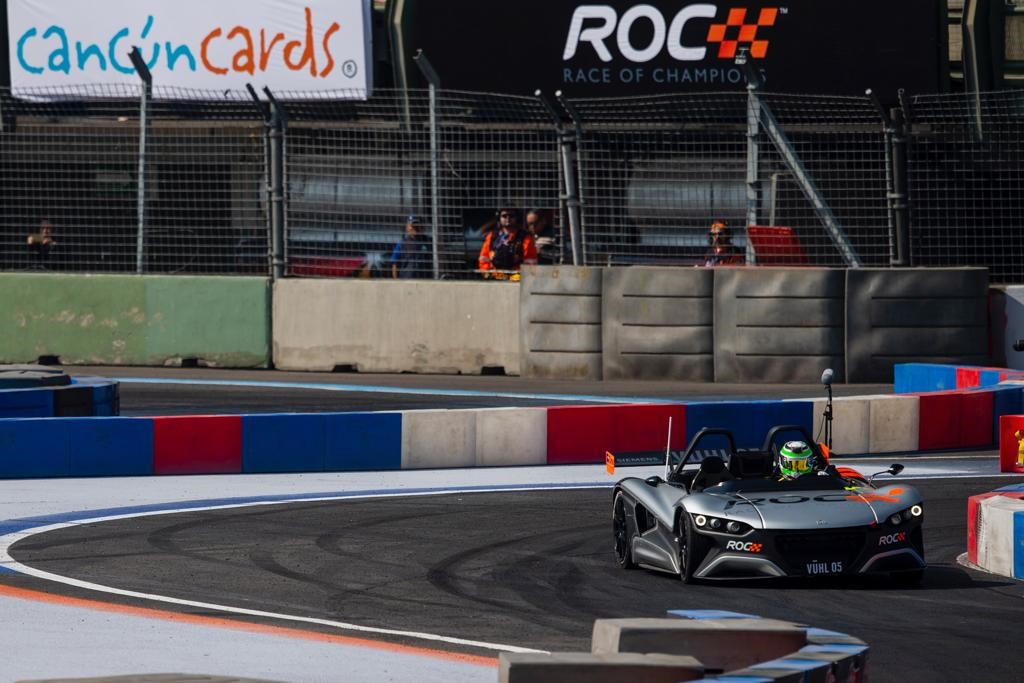 UPDATE Patricio O’Ward represented his home country of Mexico in grand fashion at his first ever Race Of Champions where he competed against and beat several of the best drivers from around the globe at the Hermanos Rodriguez Autodrome.

The Race Of Champions or “ROC" weekend consists of several opportunities for drivers to go head-to-head in identically matched cars. The two most important competitions of the weekend include the ROC Nations Cup and the individual finale, the Race Of Champions. The ROC Nations Cup pairs drivers with their fellow countrymen to fight for the title of the fastest country.

O’Ward, the youngest of the twenty drivers in total, was joined by Mexican teammate, Esteban Gutierrez. O’Ward won his first outing against Benito Guerra by eight-tenths of a second and was also victorious against Germany’s Mick Schumacher to help advance “Team Mexico" to the ROC Nations Cup semifinal round. There, O’Ward was edged out by Johan Kristofferson by only nine-hundredths of a second who eventually won the ROC Nations Cup with Nordic teammate, Tom “Mr. Le Mans" Kristensen.

The last day of the action-packed weekend threw teamwork out the window for all twenty drivers to compete to become the “Champion of Champions" in the individual main event. The nineteen-year-old’s first victory came against 13-time Formula 1 grand prix winner, David Coulthard.

O’Ward used the momentum of that win against his next opponent, NASCAR Mexico’s Abraham Calderon, where he also came out on top and secured his spot in the quarterfinals. In what was one of the best upsets of the event, the Mexican native had a rematch against FIA World Rallycross Champion Johan Kristofferson. Driving a rally-car for the second time ever, O’Ward pulled off the win against the Swede and kept his winning streak alive.

O’Ward’s final race was against French driver Loic Duval. After suffering from driver error on the start, O’Ward was unable to make up lost time and was knocked out of the competition. Duval went on to become the first-runner-up to Benito Guerra who won the 2019 Race Of Champions.

Out of the four drivers that represented the NTT IndyCar Series at the event, O’Ward had the most success and made it the furthest through the competition. O’Ward’s next official 2019 NTT IndyCar Series activities will be in Austin, Texas for the annual Media Day on February 11.

Patricio O’Ward – Driver for Team Mexico
“Honestly, I am so thankful for the opportunity and the invitation to run in the Race Of Champions. It was great to meet all the drivers that I don’t get to race against in my championship and create those new relationships. There was no better place than Mexico City for the event – the fans were spectacular!

I was fast. I had the rhythm! Unfortunately, I didn’t make the final for the main event because I made a driver error coming off the line on the start and shifted into second gear. The transmission locked up and I lost a good amount of time. I made up some ground, but I was two tenths short so it was quite enough. It was an awesome experience and I hope to get another invitation in 2020. Now, I’m really looking forward to the start of the 2019 NTT IndyCar Series."

01/21/19 Of the three INDYCAR champs who made the trip to Foro Sol in Mexico City for the 2019 Race of Champions, it was Patricio O'Ward who put on the most impressive show.

In the individual Race of Champions, he knocked off retired F1 star David Coulthard and NASCAR Mexico's Abraham Calderon to secure a spot in the quarterfinals. There, he got the best of Kristoffersson in a rematch. DTM racer Loic Duval edged O'Ward in the semifinal, but the NTT IndyCar Series rookie had already grabbed the attention of fans around the world. IndyCar