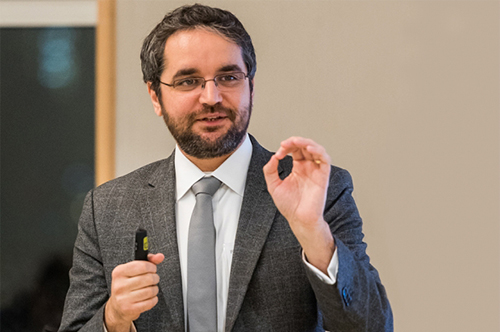 Supercapacitors offer quicker recharge and discharge times than batteries but suffer from diminished capacity. Most supercapacitors use porous carbon as active electrode materials, such as activated carbon, carbon nanotubes, and crosslinked or holey graphenes. These materials are difficult to produce, requiring harsh temperatures and chemicals.

Now a team from MIT has turned to extremely porous and sponge-like structures called metal-organic frameworks (MOFs) to create a supercapacitor material with a surface area up to three times greater than carbon materials, according to a new paper published in Nature Materials. Unraveling just one gram of the substance is enough to cover an American football field.

The supercapacitor — made from a material called Ni3(hexaiminotriphenylene)2 — is also the first ever without conductive carbon capable of surpassing the performance and durability of current models.

Mircea Dinca, an MIT associate professor of chemistry who led the research, says the new supercapacitor could improve the battery technology we see today.

“Our lab’s discovery of highly electrically conductive MOFs opened up a whole new category of applications," Dinca said, according to MIT News.

“Tests showed that the material lost only 10% of their performance after 10,000 cycles — that competes with other existing supercapacitors and batteries."

Among those applications is in viable energy storage devices for electric cars and the smart grid. The new supercapacitor could potentially recharge electric vehicles much faster and create longer lasting battery tech than carbon structures due to its ability to withstand more charge-discharge cycles, the researchers said. Dom Galeon/Futurism