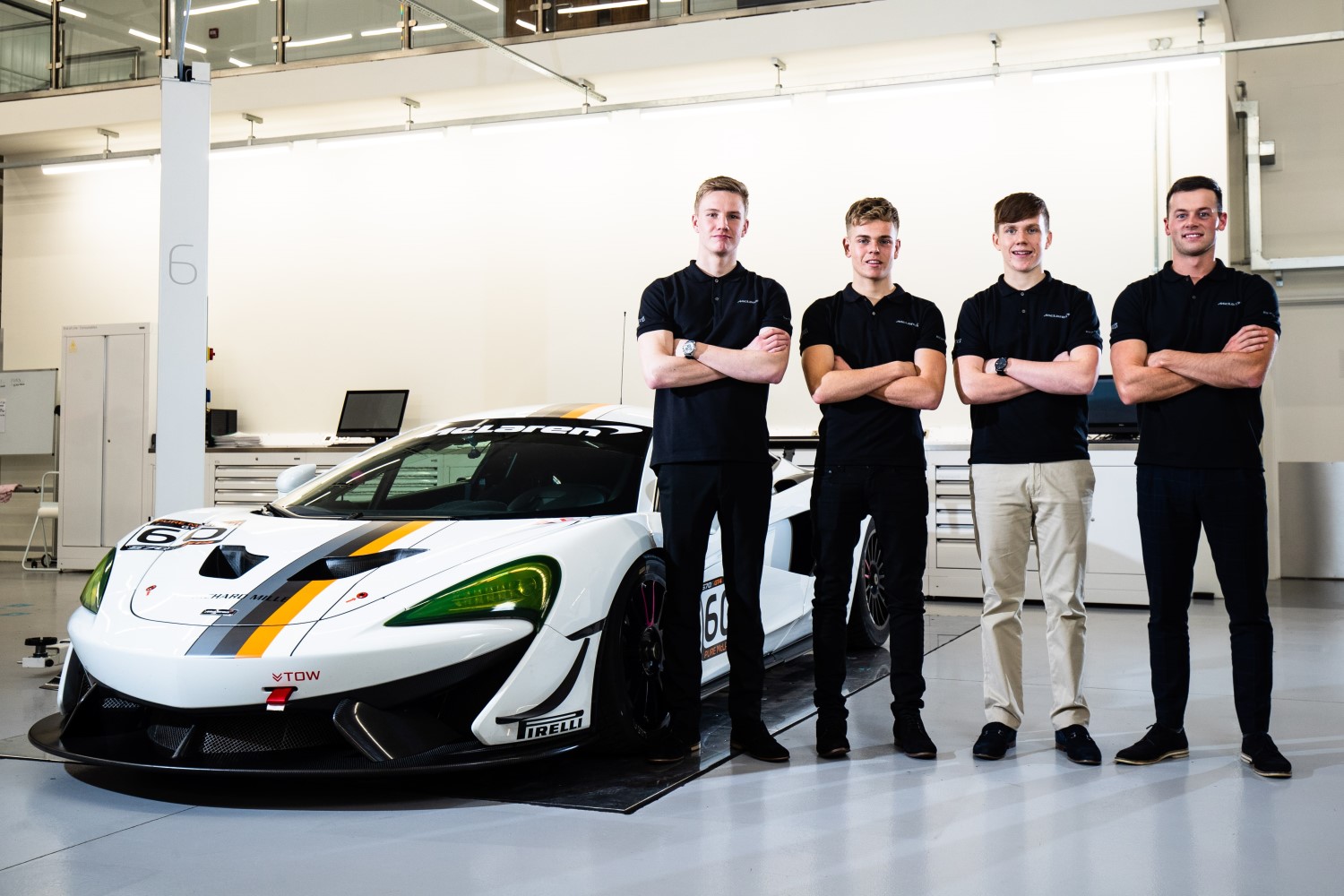 McLaren Automotive continues its drive to develop future racing talent with confirmation of the drivers who will participate in its 2019 Driver Development Program (DDP). Introduced for 2018, the initiative is designed to support and nurture young, up-and-coming GT drivers, providing a base for a career in motorsport.

The successful candidates who will join the McLaren Automotive Driver Development Program for 2019 are: James Dorlin (19); Jordan Collard (18); and Josh Smith (19). They will be teaming up with 2018 DDP member, Lewis Proctor (22), who remains in the Program for a second season.

The DDP Program is designed to help drivers gain valuable experience both on and off the track, with a view to develop the next generation of McLaren Automotive Factory Drivers to compete in endurance racing.

“I am delighted that the McLaren Automotive Driver Development Program commences its second year with four excellent young drivers confirmed today for 2019," commented Mike Flewitt, CEO, McLaren Automotive. “We established the Program to help gifted young drivers realize their motorsport ambitions, providing professional tuition and guidance to foster their racing talent. All of our 2018 drivers; Michael O’Brien, Charlie Fagg, Lewis Proctor and Jordan Albert have benefited from focused professional development and any one of the four drivers selected for 2019 is a potential GT Championship winner at the wheel of a McLaren – perhaps our new 720S GT3 car that last weekend in Abu Dhabi made a remarkably strong start to its competitive career."

The four 2019 DDP drivers will receive performance assessments and evaluations throughout the season, alongside an individually tailored program designed to ensure measurable performance improvement. With access to a range of professionals from across the McLaren business, including the support and mentoring from the Factory Drivers, each member of the program will receive guidance in PR, marketing and sponsorship as well as valuable insights into fitness and nutrition assessments, data and telemetry management and understanding, as well as contract management.

Despite their youth, the three drivers joining the program have already achieved significant successes across the motorsport spectrum, including in karting, single-seat and touring car formula. The drivers were selected from a talented shortlist following a rigorous two-day assessment to analyze a range of different skills and abilities, both in and out of the driving seat.

Each of the drivers underwent formal interviews, monitoring of overall fitness, engineering discussions with data analysis, and various driving activities against the clock in a 570S GT4, simulating qualifying runs and extended race pace. Each of these were overseen by a team from McLaren Automotive that included Factory Driver, Rob Bell.

The 2018 Driver Development Program saw the four drivers perform strongly throughout the season, securing a combined two pole positions and five podium finishes from the seven-date British GT race calendar with customer team Tolman Motorsport. These results saw the driver pairing of Charlie Fagg and Michael O’Brien narrowly miss out on the GT4 driver championship title, by just two points. For the 2019 season, Fagg and O’Brien will move to the newly established McLaren Automotive junior performance academy, which will see them both racing with McLaren Automotive GT4 customer teams.

O’Brien will return to the British GT grid, and continue to race at the wheel of the 570S GT4. He joins Balfe Motorsport and will partner with Graham Johnson who will be looking to continue his form from the closing races of the 2018 season, which saw him take victory at Brands Hatch. After a strong season with results in both the British and China GT championships, Fagg will also return to race the 570S GT4 during 2019, and details of his program will be announced in the coming weeks.

Jordan Albert leaves the Driver Development Program at the end of the 2018 season, but will remain part of the McLaren Automotive family. He will continue his involvement with the brand on events and activities, including Pure McLaren track experiences.

“It’s a pleasure to welcome three bright young talents to the McLaren Automotive Driver Development Program for 2019. Following a successful inaugural season for the program, which saw two of the four drivers challenge for the GT4 class title in the British GT Championship, we’re looking forward to further successes for the second year of the program. James Dorlin, Jordan Collard and Josh Smith impressed us during the selection process and join us on the back of excellent results in their respective 2018 campaigns. Together with retained DDP driver Lewis Proctor, they will be ones to watch in 2019."
Dan Walmsley, McLaren Automotive, Director of Motorsport

James Dorlin
James Dorlin graduated from karts to car racing via the Saxmax Championship and Junior Saloon Car Championship before moving up to the Michelin Clio Cup Series and then the Renault UK Clio Cup in 2017. In his second year in the championship he qualified on pole position four times, took six race victories – more than any of his rivals – and a further three podium finishes on his way to an eventual second place. A British Racing Drivers Club (BRDC) Rising Star, James has also competed in historic racing with the Historic Racing Drivers Club and at Goodwood.

“I’m really excited to be part of the DDP. It’s a great opportunity for me to progress my career and to be doing so with McLaren is a real privilege. 2019 is sure to be a massive learning curve but I’m confident we will be achieving some very strong results from day one. I’m looking forward to starting what will hopefully be a long, successful journey with McLaren Automotive."
James Dorlin

Jordan Collard
The younger son of multiple British Touring Car Championship race-winner Rob Collard, Jordan has tasted victory in karting, before graduating to cars in Ginetta Juniors, then stepping up to the MINI CHALLENGE in 2018. He took overall race wins in his maiden season in the series, and finished third in the title standings as well as being crowned Rookie Champion. Jordan has also been accorded BRDC Rising Star status this year.

“Being a part of the McLaren Young Driver Program has completely changed my future in such a huge way. My end goal has always been to become a professional driver, now thanks to the unbelievable opportunity McLaren has given me, I am a step closer. The way the McLaren brand has been developing over the past few years it will be an honor to race for them."
Jordan Collard

Josh Smith
Former X30 Junior World Karting Champion Josh Smith has won races in MSA Formula and BRSCC Formula Ford 1600. His 2018 season in the latter championship ended in style, with a brace of victories at Croft quickly followed by victory in the famous Formula Ford Festival at Brands Hatch. Josh won this with a fighting performance, taking the race lead on the last lap of the festival final, and adding his name to a prestigious roll of honor that includes Johnny Herbert, Mark Webber and Jenson Button.

“Becoming part of the McLaren program is a life time dream becoming a reality. It fills me with an overwhelming amount of pride to be a part of such a historic and prestigious brand. My hopes for the year ahead are to show McLaren my full potential and skill set, however I also hope to improve, develop and become a more defined driver."
Josh Smith

Lewis Proctor
Having taken up motor racing just three years ago, Lewis Proctor quickly progressed from competing in a Ford Fiesta XR2 to the GT Cup Championship in a McLaren 570S GT4. Joining the McLaren Driver Development program upon its inauguration, he was paired with Jordan Albert in a Tolman Motorsport McLaren 570S GT4 for the 2018 British GT Championship season. The crew finished second at Silverstone and Snetterton, and in the case of the latter just under three seconds shy of the winners.

“I am honored to be able to represent McLaren for 2019 and to build on everything they have taught me throughout the 2018 season. My long-term aim is to aspire to race a McLaren at European or international level and continue to learn from the highly experienced team of coaches and McLaren employees as they assist me through my career."
Lewis Proctor