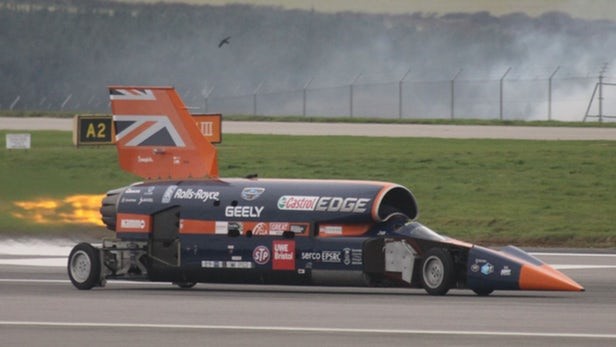 It's been a rocky road since the Bloodhound supersonic car made its world debut in London in September 2015, almost 10 years after the company behind the project was founded. The Bloodhound team has hit some important milestones on its way to the target of breaking the 1,000 mph barrier – most recently rocketing to 210 mph in just eight seconds. But, as you might expect, development has proven costly and just last week it was announced that lack of funds had ended the project for good. Now a new backer has been found and it's on again.

Though Bloodhound Program Ltd – the organization behind the project – was unsuccessful in finding a backer to keep the development program going, Bloodhound SSC said last week that its educational charity would continue through workshops and events, and would even grow in 2019.

Today the Bloodhound team has revealed that a Yorkshire-based entrepreneur has stepped in at the last minute to secure the future of the land speed record attempt. After seeing last week's grim news, Ian Warhurst jumped in and purchased all of the business and assets of Bloodhound Program Ltd for an undisclosed amount.

"We have been overwhelmed by the passion that clearly exists for Bloodhound and are thrilled that we have been able to secure a buyer who is able to give this inspiring project a future," said joint administrator Andrew Sheridan. "Ian has a strong background in managing highly successful businesses in the automotive engineering sector and he will bring considerable expertise to bear in taking the project forward."

Warhurst will detail his plans for the future of Bloodhound SSC early in 2019.